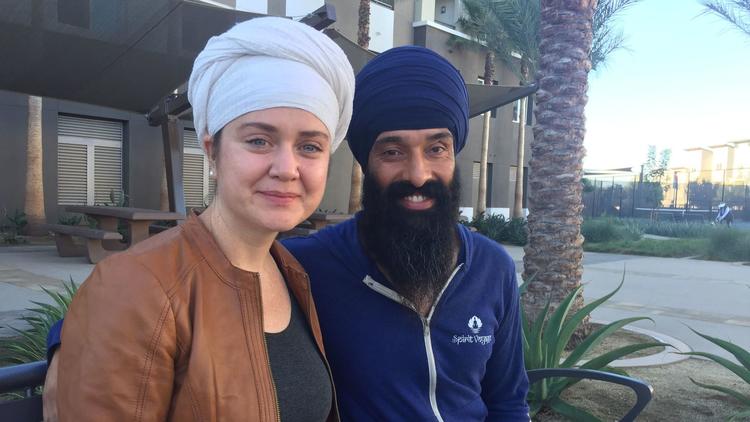 After running into some obstacles while feeding needy people in a neighborhood park, an Oceanside couple is doubling down in their effort and raising money to buy a trailer that will provide even more meals to people throughout the county.

As part of that goal, Davinder Singh and his wife Harisimran Kaur Khalsa have created the Duwara Consciousness Foundation. Khalsa said the foundation’s name means “gates to consciousness” in Sanskrit, and the group’s misson, as described on Durwara.org, includes teaching compassion, providing hunger relief and promoting equality.

Singh said the mission aligns with their Sikh faith, but is intended to help all people.

Last May, the couple began feeding people at Oceanside’s Joe Balderrama Park, which is in a neighborhood known for gang activity.

“It’s a rough neighborhood,” Khalsa said. “On a week-to-week basis, we’d typically see somebody getting arrested.”

The experience was eye-opening and reinforced the couple’s belief in a need to help their community. Khalsa said she saw a boy about 9 years old who appeared to be on drugs, and she believes a girl who regularly came for meals was a gang member.

After about two months, Khalsa said they were notified by the city of Oceanside that they needed an special-event permit to continue the feedings.

“It was more of a crossroads for us,” she said. “We decided, rather than go that direction, we would go the food-trailer route and go to a lot of different spots.”

Singh moved in 2015 to San Diego County from England, where he was born and had been an entrepreneur in several businesses around London. His ventures included eco-friendly baby shops and studios for crystal healing and yoga. Since moving to Oceanside, he has set his businesses aside to focus full-time on Duwara Conscientiousness, which was formed in 2016.

Khalsa is from Los Angeles and has lived throughout the country and India. She holds an MBA and works as an accountant.

Inspired by their faith and with backgrounds in business and accounting, the couple have launched a fundraiser to buy a food trailer they can take to where they see a need. Later, they hope to buy a portable shower for homeless people to use.

They organized a “yoga-thon” earlier this year that raised $7,000 and they plan to hold another next month.

They already have a truck to haul the trailer and have $9,000 saved. They estimate they’ll need another $40,000 for the trailer, equipment and permits they expect they’ll need from cities and the county.

Obtaining permits will be a challenge, but isn’t impossible. The nonprofit So Others May Eat operates a food trailer that feeds more than 100 people each week at a Mission Bay park.

The couple has worked with the nonprofit Fill-a-Belly, helping the group feed dozens of people in a Carlsbad park on Tuesday nights.