So I went to Iran alone. Most people think I’m stupid or crazy, or both. But am I really? I must admit I had some doubts and couple of minor panic attacks before going, mostly due to my uncertain visa situation, but also because I haven’t traveled to such an exotic, unknown destination before, the one I didn’t really know how to prepare for. But the whole „solo female travel in Iran” thing turned out to be really cool and easy there and I enjoyed every single bit of it! 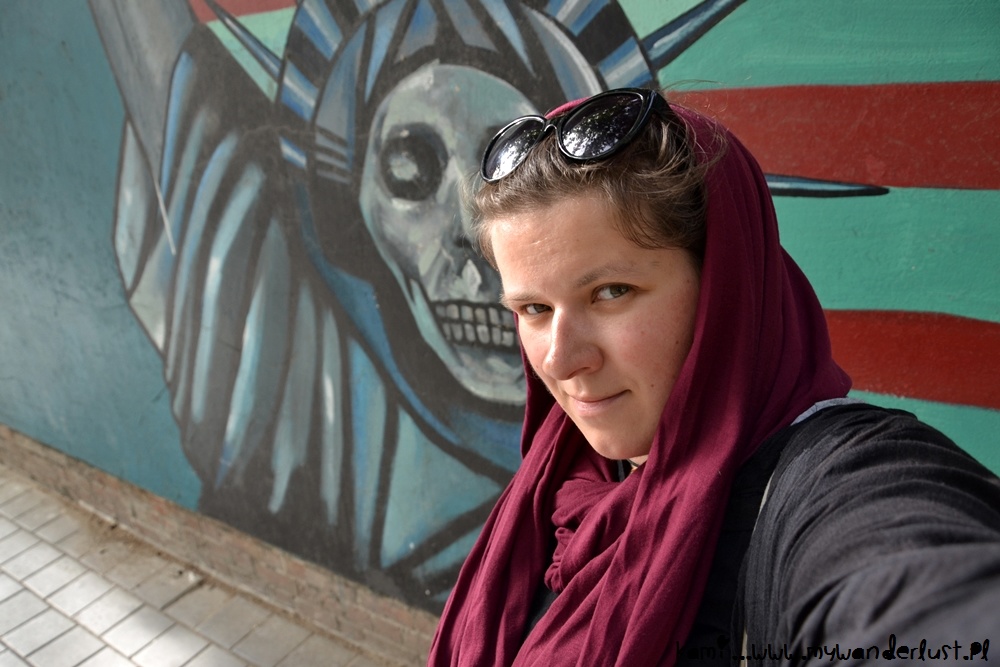 For the 10 days I’ve spent in Iran I haven’t met another woman traveling alone (but I’ve heard from others there’re 2 more doing the same thing as me at the same time). There were tourists, surprisingly many of them, few guys traveling solo but not a single women. That just meant to me that the stereotype that Iran is a dangerous place to visit, especially for independent (female) travelers are as strong as always. When I was telling my friends I’m going to Iran some 90% of them were seriously concerned about me and asked me to think over my chosen destination. People keep confusing Iran and Iraq, thinking it’s a country torn by war and now under the ISIS rule. I kept explaining that it is a perfectly safe place, that I haven’t heard of anyone having a single issue there, that everyone I know just loved their visit in that country. But still people were not convinced and that eventually made me feel pretty nervous about my trip to, I started having the thoughts of what I’m getting myself into… 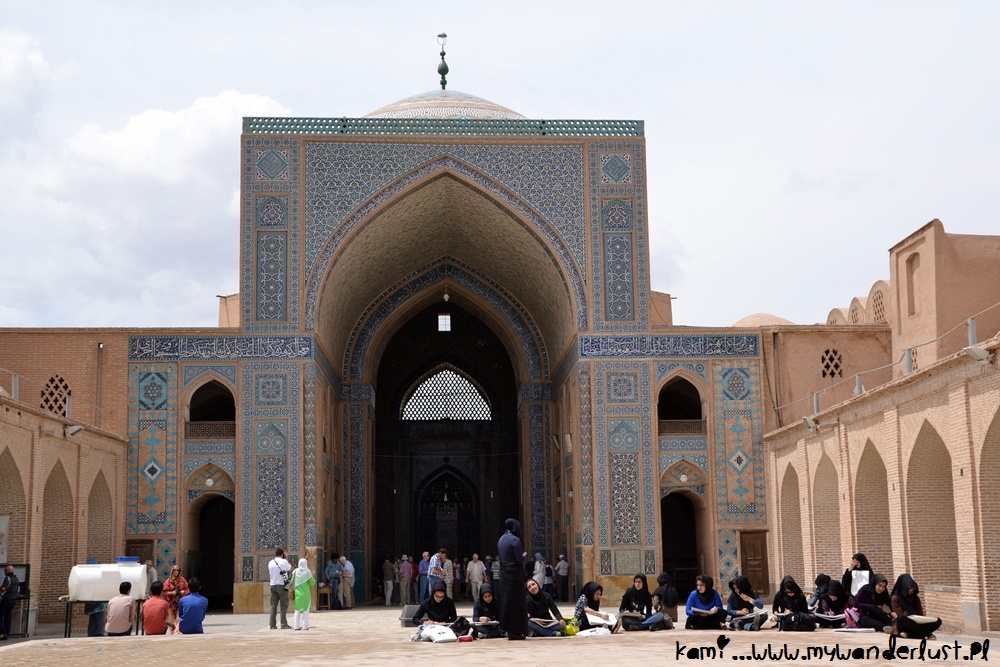 For the whole time I’ve spent there I didn’t encounter even one situation when I would have felt in danger or even uncomfortable. Unlike other countries that are top tourist destinations but can be challenging for solo women (I’m looking at you Morocco) Iran was completely safe! Of course people were staring at me, both men and women, young and old but it was only because they were curious and didn’t have any bad intentions. Some braver one tried to talk to me and every day I repeated the word „Lachestan” („Poland” in Farsi language) countless times. Usually the question where I am from and how do I like Iran were the only ones I was asked. Just the other day I saw a list of the safest cities in the world and I was not surprised to see Tehran there. Iran really was probably the safest country I’ve ever visited! 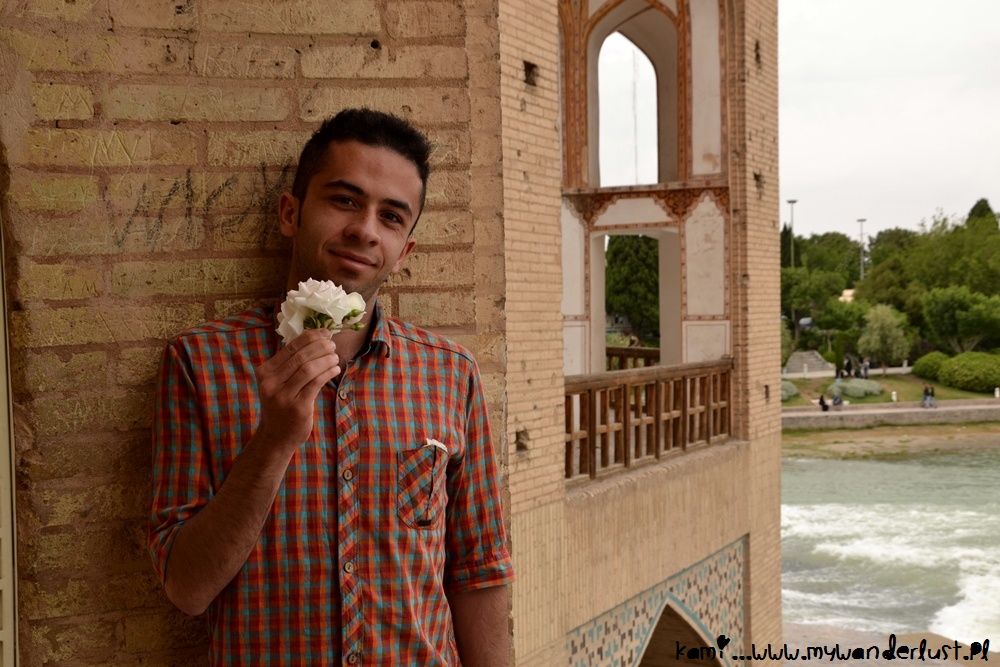 I heard so many things about the incredible Iranian hospitality I was really curious to see how it really is. I usually divide such stories by four and don’t expect much but surely on my second day in Iran (or was it a night?) I experienced it as well. I took the night bus from Tehran to Shiraz (the journey was supposed to last between 12 and 15 hours) and at 5 in the morning I was woken up by the driver – it turned out he lives in the random town we were passing by and since at that point there was only me and two more passengers – a mother with a teenage daughter – he invited us over for a breakfast. Normally I wouldn’t have accepted such an offer (and I refused few times before finally agreeing) but since I was accompanied by other women I figured out nothing bad can happen. No one spoke English so for two hours we all did our best to communicate with hands, speaking loud and slow in our languages or using the short phrasebook at the end of Lonely Planet. Still it was a really lovely time, I felt very welcomed, ate much more than I’ve wanted and even got some extra food for the onward journey. And stories like this do happen in Iran, a lot. People there are incredibly generous and hospitable and don’t have any bad intentions! As soon as you step out of the tourist route someone will talk to you and you never know how it might end! Just be open and say „yes” – that’s where the adventure in Iran starts! 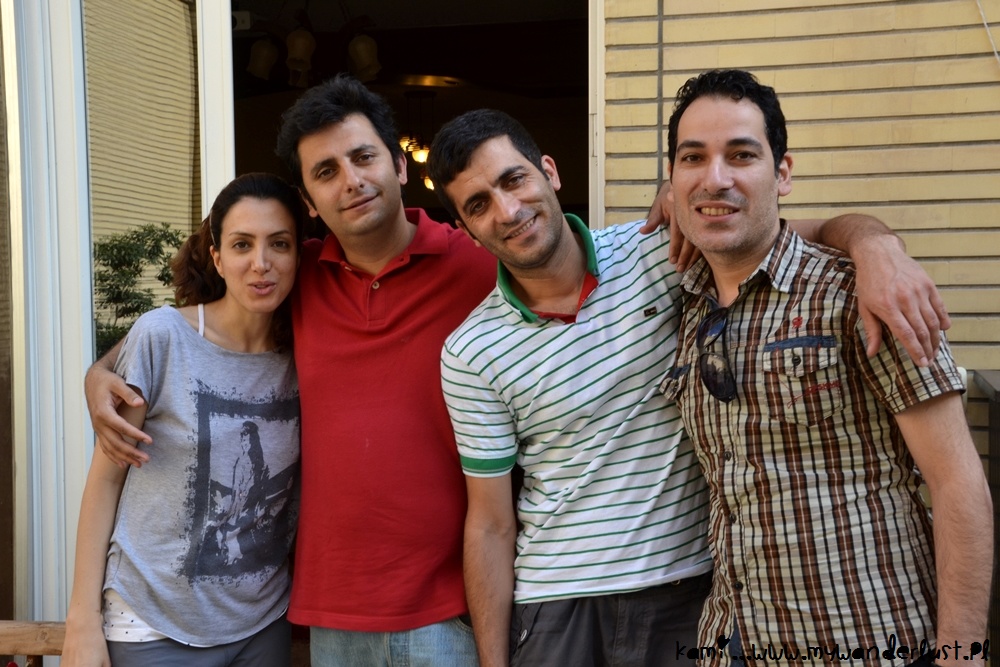 You probably have heard about the Tehran metro that has separate carriages for women. Well, it’s true. I was slightly afraid I will end up in a wrong car but as it turned out there was nothing to worry about. At the platform it is clearly marked where the women-only zone starts and those specific carriages are located at the front and back of the train. The stations are full of posters showing why men shouldn’t enter these parts of the metro, how uncomfortable the women would feel. Travelling around Tehran was quite an experience anyway! There was always something going on, on every station the new show was starting, women were selling and buying all necessary things: from kitchen equipment to make up and bras! 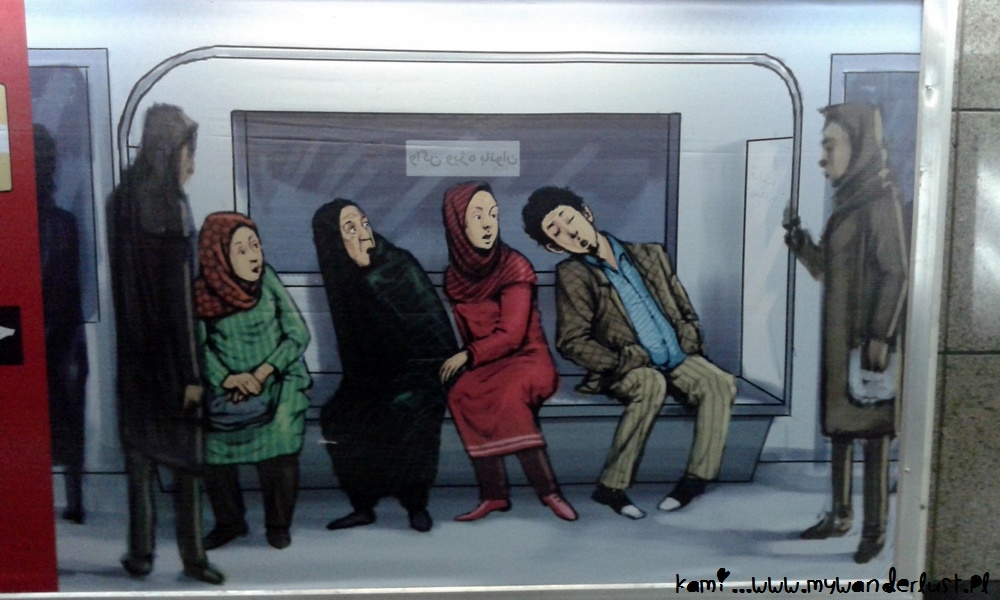 The buses between the cities didn’t have the specific areas for women but when buying a ticket you get a seat reservation too. It happens that a guy gets a place next to you – it then takes some creativity from the driver to rearrange the passengers so no woman sits next to an unknown man. During my journey from Kashan to the airport (3 hours) I changed the seat 3 times!

I’m the kind of person that likes to have everything organized and when I travel I always book the place to stay in advance as I prefer to know there’ll be a bed waiting for me at the end of the day. Well, this wasn’t the case with Iran. Due to my uncertain visa situation I wasn’t sure if I will be let in to the country and so I only booked my first night in Tehran (it was required to get a visa anyway). The next nights I spent in various places: a random hotel with only Iranian guests (I was a big attraction for them), 8-bed dorm in the basement of the most touristic hotel in Yazd (both nights I was the only women in the room), a private room in another hotel popular among foreign tourists and couchsurfing with a lovely Iranian couple. And every time it was all fine! The only issue I had was in Yazd where the bathroom was located few steps away from the dorm and to get there I had to cross the patio with the restaurant – with wet hair, wearing a pajama, a tunic and a scarf on my head I must have looked funny. 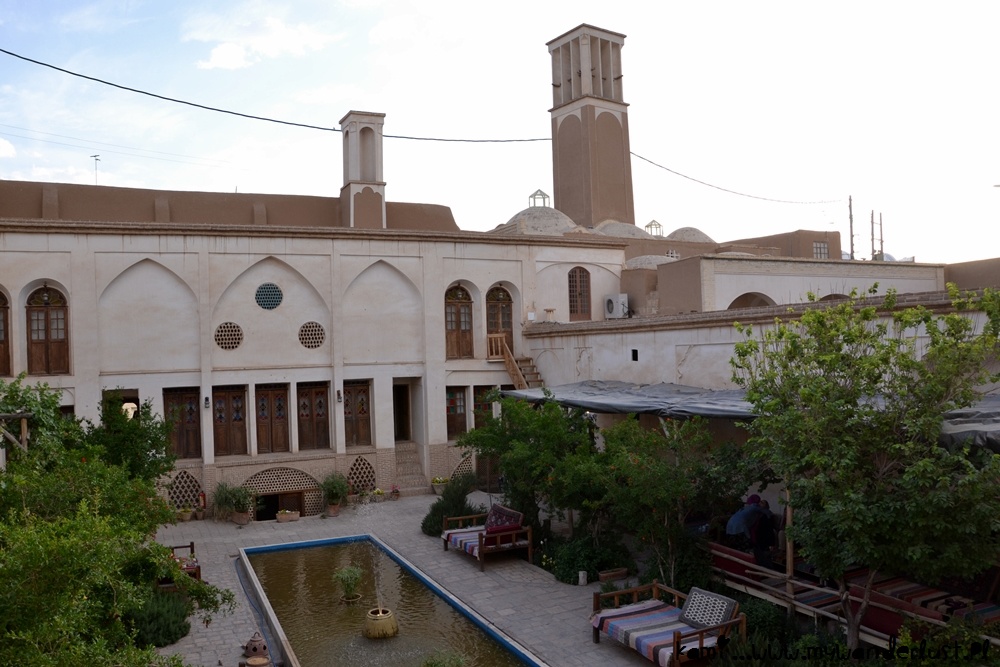 As for Couchsurfing – officially it is illegal in Iran but it is not blocked (unlike Facebook) and it is working really well in the country, every city has a lot of hosts to choose from. I heard only amazing things about CS in Iran and I knew I have to do it too! Of course I followed the rules like anywhere else: looked only for women or couples, preferable with some references, those I felt we’d click with. I tried CS in Esfahan, where I stayed with a really lovely couple – I got my own room, we spent pretty much time together and the most I learnt about the life in Iran was from them. But if you look at their home or listen to our conversation you’d never guess they’re Iranian – they could as well live in any European country! Another prove that Iran is a normal place just like any other!

That’s usually the most difficult part for solo travelers as let’s face it, we do feel uncomfortable sitting alone in the restaurant. But it was surprisingly good in Iran. When I visited a place with Iranian clientele there was always someone trying to talk to me, whether a person working there or a fellow customer (and again the same questions were asked, where I am from and how I like Iran). In the tourists-oriented places there was also always someone chatting to me, just the topics of the conversation were different. I don’t think in these 10 days I ate alone even once! The most challenging thing was eating with the headscarf on! 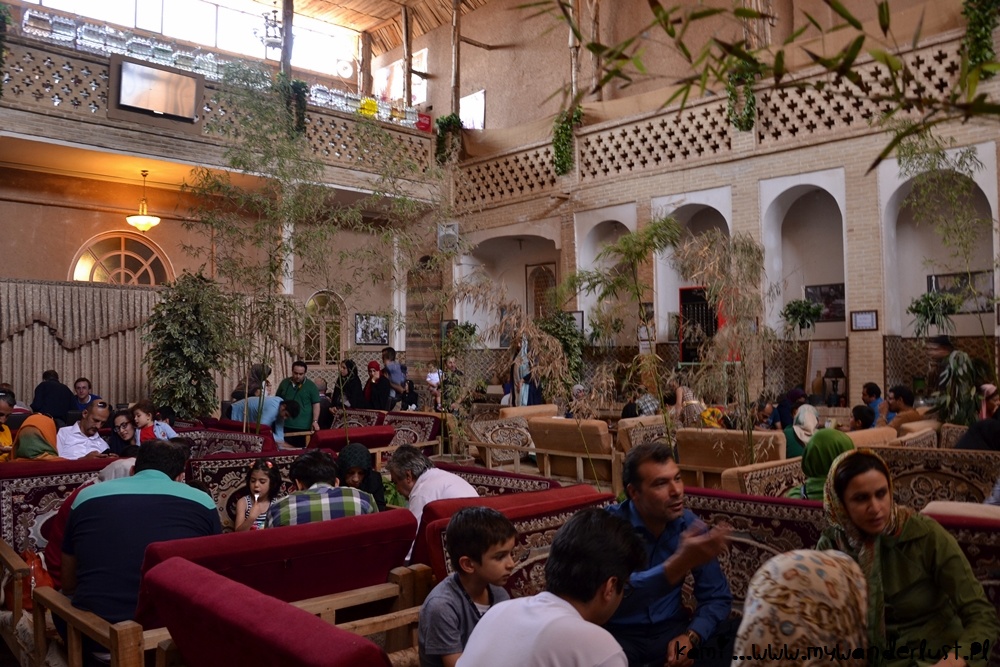 That’s the most controversial part of solo female travel in Iran. For all the time you’re outside in the public (so even in the common areas of the hotel) you need to have your hair covered and to wear a manteau (a coat or tunic). You cannot have bare arms (everyone was wearing long sleeves) and your legs should be covered till ankles however the feet can be bare. I was wearing skinny jeans and it was totally fine. Also it’s not like the hair need to be all hidden, when I was looking at some girls I was wondering how their headscarf doesn’t fall (every journey by Tehran metro left me with jaw dropped as I couldn’t stop staring at beautiful women around, with all these clothes they really know how to show best features). It’s also a stereotype that you need to wear black color only! You need to follow these rules from the moment you step out of the plane till the moment you board the plane again. 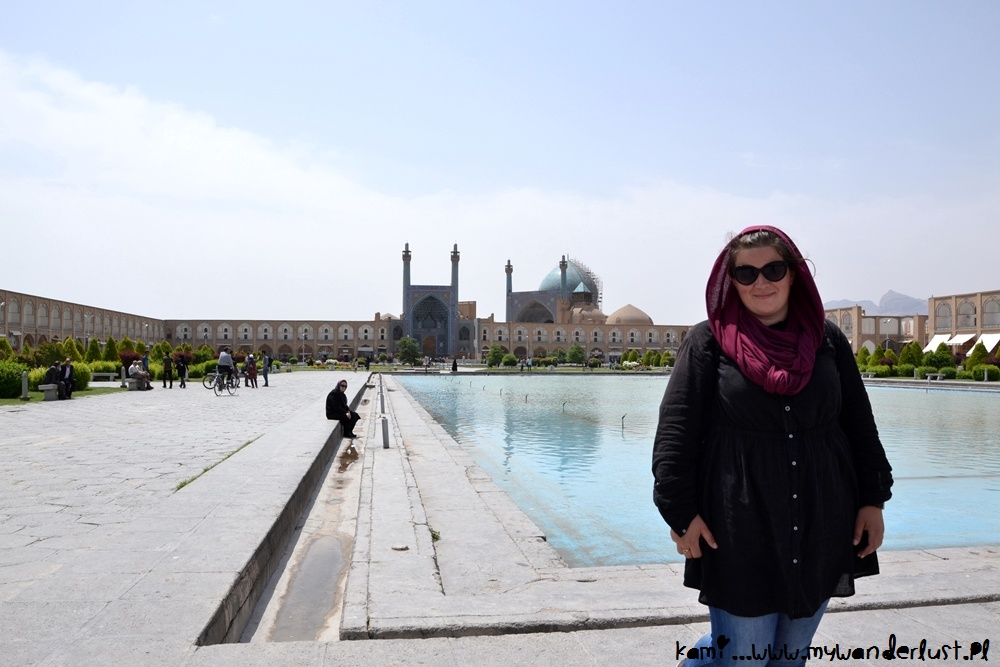 There were days when it was pretty challenging to wear all that clothes when it was really hot outside but well, there was nothing I could do about that, I just accepted these rules. And honestly I expected it will be much worse! The headscarf kept me cool from the sun and it fell down only few times (but, surprisingly enough not when I was sleeping in the bus). When by accident my arm was seen a helpful women on the streets rearranged my outfit so I looked fine again. For next two days after leaving Iran I kept checking if my headscarf is on, you get used to it pretty fast and become somehow obsessed with keeping it on your head. 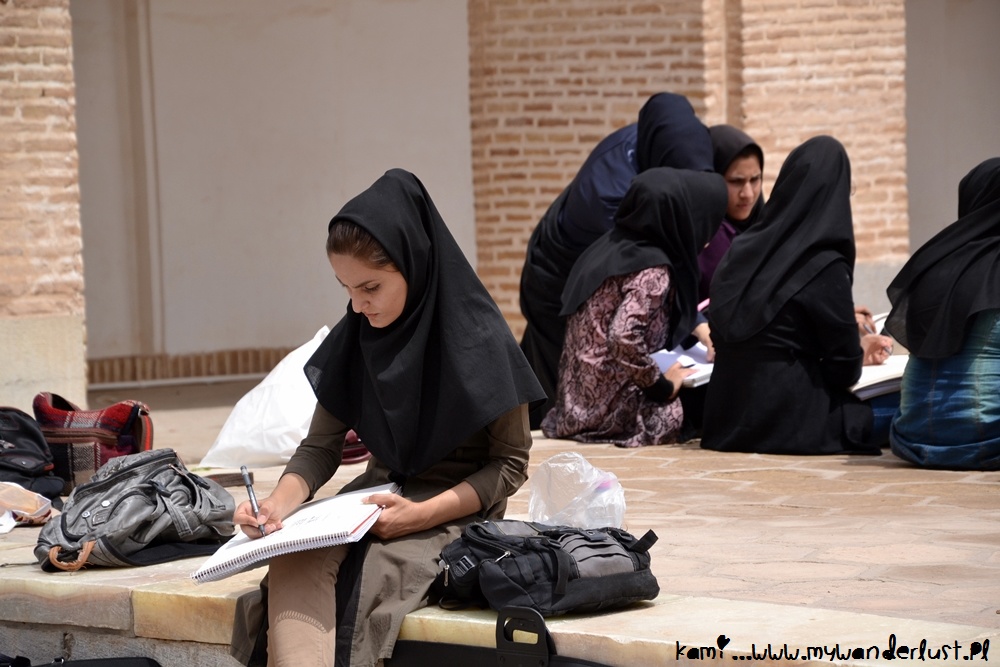 So, that’s more or less my experience with solo female travel in Iran. I really enjoyed it, felt very safe for all the time and can only recommend it to everyone! If you think of visiting Iran now is the time to go as the country and especially its politics is changing and soon might become just another tourist destination. And you don’t want to miss the real Iran!

Would you like to visit Iran? Would you dare to travel solo there? If you have any questions about solo female travel in Iran (or about the country in general) feel free to email me, I’ll gladly answer!