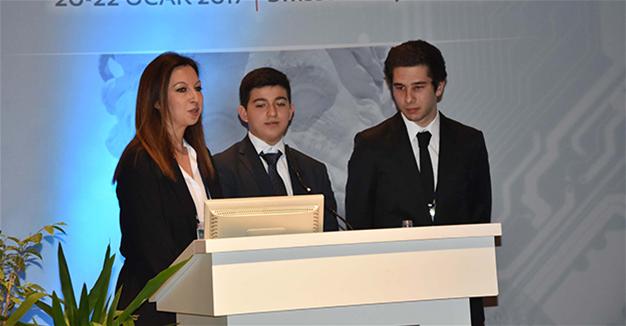 A science project prepared by Turkish high school students has received a prestigious award in the U.S. after being rejected by the Scientific and Technological Research Council of Turkey (TÜBİTAK), Doğan News Agency has reported.

With the help of their chemistry teacher Gülay Demirci, two students at a private high school in the southern province of Antalya, Mehmet Can Dursun and İrfan Efe Boztepe, prepared a project that aimed to heal wounds 30 percent faster with nanofibers formed by the shells of crabs and shrimps.

They applied to TÜBİTAK with their project but were rejected, after which they applied to a U.S.-based competition between high schools around the world.

The project got first place in the competition, which included 2,450 projects from 54 countries, winning the gold medal.

Demirci said she was proud of her students’ success and was pleased when she saw the Turkish flag on the stage as winner.

“We made a nanofiber from the waste shells of crabs and shrimps which can be used to combat diabetes. This nanofiber can be used against diabetes and burns. It also has another feature, it can easily stop bleeding. Our aim is to provide use of this product in daily routines and we want it to be manufactured. But we have not met any producer yet,” she added.

Successful student Dursun, meanwhile, said he would like to be a genetic engineer or doctor in the future.

“I researched this project very much. Now we want to see this product on the market, and it would be helpful if it becomes popular in our country,” he added.