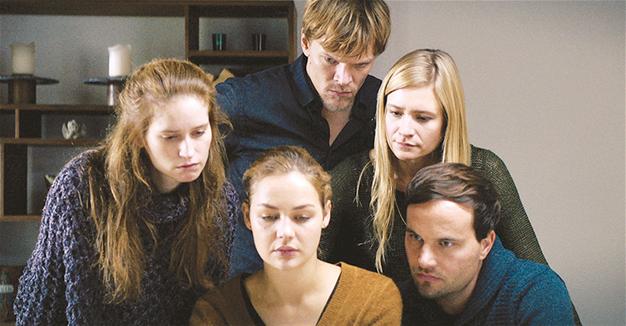 “Auf Einmal” hits Turkish theaters this week. Once again, it sees Berlin-based Turkish director and writer Aslı Özge taking a hard look at the changing dynamics of the middle class, its relationships, and what it means to be a man within this change. She knows the hopes, aspirations and disappointments of a generation and class stuck between rural and urban life, between quiet life and crushing chaos.

In “Auf Einmal,” Özge turns her camera from Turkey to Germany, adding a soft spot for the Western world to the recurring theme in her cinema: Immigrants. The film begins at a party in a small town in Germany. As the party dies, the host Karsten (Sebastian Hülk) is left alone with a mysterious woman. As the woman collapses, Karsten is not quick to call an ambulance, and thus finds himself facing criminal charges.

The mystery unfolds slowly, with Karsten’s life unfolding into a nightmare and pressure coming from every corner, from his father, to his boss, to his girlfriend. Karsten’s new status in the public eye magnifies the cracks in the system, social structure and class relations. Özge knows very well how to reveal her character’s layers slowly, making him all the more complex.

Özge’s debut 2003 feature, “Ein bisschen April” (A Little Bit of April) - filmed in Berlin and featuring three young men - was an experiment in filmmaking, letting loose the story and the actors, with an outline of ideas, characters and a sense of direction.

Men on the edge

In her second feature, 2009’s “Köprüdekiler” (Men on the Bridge), Özge brought her camera to Turkey, turning an eye to three other men, this time in Istanbul and in Turkish. The film is another experimental take - a docudrama blurring the lines between fiction and reality, bringing together three men on the Bosphorus Bridge. The men are immigrants whose families have come to Istanbul in the hope of better lives.

Fikret sells roses, Umut is a taxi driver and Murat is a traffic policeman. The three live on the outskirts of Istanbul, and each of them unsuspectingly come to the center of Istanbul, where everyday millions pass from continent to another in the rush hours. The stories of Fikret and Umut (though not Murat) are loosely based on their own real-life stories, and they play themselves. The film won the Best Film award at the Istanbul International Film Festival and the Adana International Film Festivals, as well as the Golden Wings award at the London Turkish Film Festival.

Having made its premiere at the 63rd Berlin Film Festival, Özge’s third feature, “Hayatboyu” (Lifelong) looked at a middle class Turkish couple, as the two come to realization that their relationship ended some time ago. Defne Halman and Hakan Çimenser play the couple, a conceptual artist and an architect broken in separate ways by mid-life crises. Suspecting that her husband is having an affair, Ela is forced to look at her relationships, her career, and her life. The minimalist dialogue and subtle performances give the movie a haunting effect, cementing Özge’s craft as an “actors’ director.” “Hayatboyu” brought Özge the Best Director and Best Cinematography awards at the Istanbul International Film Festival.

Alternating between Turkey and Germany, commonalities surpass differences in Özge’s cinema. The middle-class is dissected in different ways, which leading to the same conclusions. In her latest film “Auf Einmal,” fully-formed and layered characters, mostly men, continue to be Özge’s trademark. After seeing this latest release, anyone new to Özge’s work will be keen to check out her earlier films.