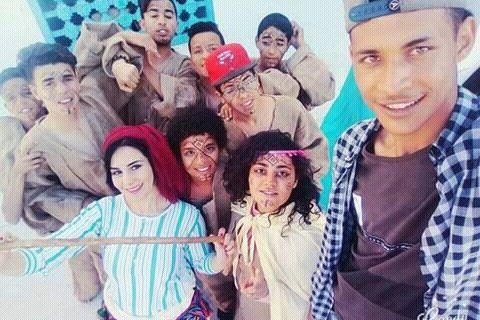 I m Asma Thabet a Tunisian artist and Theater professor .I m an asylum seeker in USA after receiving death threats from extremists in Tunisia . I need your help and your support for raising money to pay the lawyer fees to defend my asylum case.
My story:
I had worked in Kairouan for five years(a city known for its religious population and its high suicide rate), during which I created two local theater clubs for free. I managed also to attract a large number of teenagers, especially those who were victims of extremists.
In fact, many teenagers were previously exploited by religious groups, which train young men and send them to Syria for jihad.
My work has taken a great echo in many International newspapers. It has been honored too by many associations.
I have been selected by the United Nations to receive a special training for young leaders. This encouraged me to take part in many movements against corruption, violence and segregation.
In 2016, I joined the Movement of Free Thinkers; the first Arab association of atheists. Our mission was to defend secularism and human rights.
In June 2017, the Tunisian police arrested many citizens for breaking the fast of Ramadan. The Movement of Free Thinkers organized a march on 11 June 2017 to call for the release of the of the detainees and the abolition of the decree concerning what we call in Tunisia “Crime of assault on good morals”, the reason why homosexuals and non-believers were jailed.
I was in the protest vigil; so many Islamists insulted me ​​through Facebook messages.
In the same month, I was called by the director of the Summer Festival of Kairouan to participate in a street show as a dancer and a coach of a group of students. The festival manager chose a symbolic place for the show, the same yard that religious extremists used previously for their public meetings.
The show was a big challenge for me and for my students as it is an invitation for people to practice art and fight religious dogmatism.
A local magazine published pictures from the show on Facebook. And I appeared in some of them. Consequently, I received all kinds of negative comments.
On 13 August 2017, which is the National Women’s Day, the Movement of Free Thinkers called for a march to protest against the heritage inequality, inspired by the Islamic Sharia.
I participated as usual in this march, but this time, I was surprised by the death threats coming from a person named Mahran Hizi. In fact, he made a Facebook comment in which he explicitly invites people to kill me because I am criticizing the Islamic law. A lot of my students told me that they had received threats from the same person as they defended me through comments. Mahran Hizi did not stop there. In fact, he published my photos and called a second time to kill me.
In September 2017, I filed a complaint against Mahran Hizi based on a report made by a legal expert .
After police confirmed the seriousness of the threats and that This person carries an extremist terrorist thought and shows it through what he publishes on Facebook and Twitter; Mahran Hizi was arrested. The case was referred to the court and then became a public opinion issue.
Mr. Farahat Al-Madiouni volunteered to defend me on behalf of the Movement of Free Thinkers and the League of Human Rights.
Waiting for the trial day, I received dozens of threats from members of Mahran’s family.  My younger brother was threatened too. This encouraged my family to expel me. In fact, my family did not support me because they were a religious family.
After my sense of danger and pressure of my family and many attempts to induce me to tolerate those who want to kill me,on 28 September 2017, I traveled to the USA.
On 8 November 2017, the trial was held and three lawyers were there to defend Mahran Hizi.
The judge, a member of the Islamic Party known for his religiosity, ordered the release of Mahran Hizi. He suggested to my lawyer that I take a financial compensation, but I refused the money because my convictions are not for sale.
After his release, Mahran did not stop threatening me. So, I decided to delegate a legal expert (Rim Kortas) to follow up all the new death threats coming from Mahran Then I contacted a lawyer (Hatem Ayedi) to file another complaint based on the legal expert certificate.
But the police did not move to arrest the accused despite evidence, because of my history as a protestor against police abuse .