By Tanya Birkbeck for The Globe and Mail 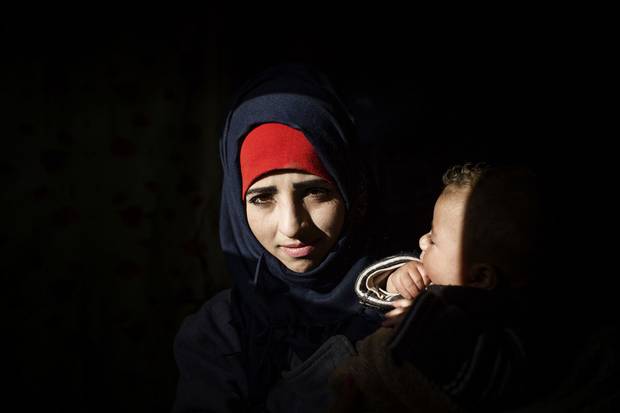 Kawthar Nawara, 17, holds her four-month-old son, Omar. After she and her family went to live at a camp for Syrian refugees in Lebanon, she says circumstances forced her into child marriage when the family needed money. ‘This wasn’t my dream,’ she says. ‘My days are always bad. There is no happy day for me.’ PHOTOGRAPHY BY DIEGO IBARRA SÁNCHEZ FOR THE GLOBE AND MAIL

Cradling her baby boy in her arms, 17-year-old Kawthar Nawara walks into the single room she shares with her family and kneels down on one of the cushions on the floor of their shelter made of wood and plastic sheeting.

Along with dozens of other Syrian refugee families, they live in a makeshift camp in Lebanon's West Bekaa region, about halfway between the Mediterranean and the Syrian border.

Ms. Nawara looks younger than her age and her four-month-old son already seems half the size of his mother. She has big brown eyes lined with kohl and tiny hands manicured with pink polish. While the older women around her wear long dresses in dark colours, Ms. Nawara sports jeans and runners with sparkly heels.

It's hard to believe this young woman has been a wife for a year and a half.

"This wasn't my dream," she says. "My days are always bad. There is no happy day for me."

In the past five years, more than a million Syrian refugees have streamed across the border into Lebanon. In this tiny country – still recovering from its own brutal civil war – they have found relative safety but also grinding poverty. It makes many families so desperate that giving up their teenaged daughters for marriage seems like the only solution.

"Most of the time, are not necessarily happy to do this, but they are left with no other choice from their point of view," explains Maya El Ammar, who works with KAFA, a Lebanese organization that fights violence against women.

Because Lebanese laws limit refugees to low-paying jobs in farming, construction and domestic work, many families struggle to pay rent and buy food.

"Landlords even sometimes ask to marry the daughter in return for rent," Ms. El Ammar says.

A new study by public-health researchers at the American University of Beirut shows that stories such as Ms. Nawara's are increasingly common among refugees in Lebanon.

The study, conducted in 2016, found almost 35 per cent of female Syrian refugees between the ages of 20 and 24 were married before they turned 18.

Before the Syrian war began, it was relatively rare for girls in that country to be married so young. Now, nearly 13 per cent of refugee girls are already married at 15 – the age at which Ms. Nawara became a wife.

The increase in child marriage among Syrian refugees is "certainly affected by conflict and forced migration and the accompanying decline in living standards," says Jocelyn DeJong, a Canadian and one of the authors of the report.

There is also a correlation between early marriage and dropping out of school, Prof. DeJong says. While nearly 70 per cent of 12-year-old Syrian girls in Lebanon go to school, the percentage drops to around 33 per cent for 14-year-olds.

Ms. Nawara went to school until Grade 6 in Syria. But she has not attended classes since arriving in Lebanon in September, 2015, with her father, sister and brother. (Her mother left her father before the war and did not come with the family to Lebanon.)

She says it was the poverty, and not any person, that pushed her to get married. "We were in need and my father was sick. He was unable to work."

But her husband – who is the same age and also a Syrian refugee – has developed health problems, too, and is barely able to support them. There is no medicine when the baby is not well, no money for food and clothes, and seemingly no way out. 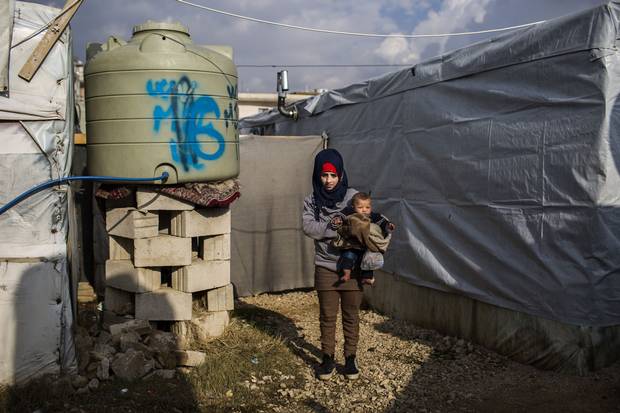 Kawthar Nawara’s home in Lebanon’s Bekaa Valley. ‘I dream of having my own room,’ she says, and ‘to be able to get something that makes me happy, makes my son happy and my husband happy.’ 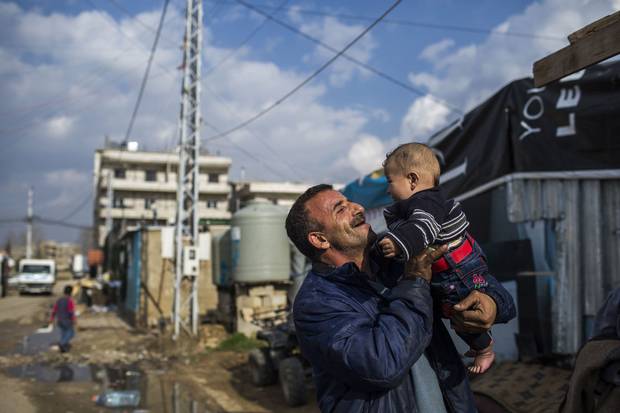 ‘My daughters loved me a lot when we were in Syria,’ says Ms. Nawara’s father, Ibrahim Ahmad Nawara. ‘I wanted them to get married to the man who deserves them … but here we were forced.’

'She was a clever student'

Ms. Nawara's father admits Kawthar was too young to get married.

If it were not for the war, "she would have continued her studies because she was a clever student," Ibrahim Ahmad Nawara says.

"My daughters loved me a lot when we were in Syria. I wanted them to get married to the man who deserves them … but here, we were forced."

In Syria, Mr. Nawara made a good living as a metal worker. But when he refused to act as government informant, he was arrested and the torture he says he endured left him with injuries that made it difficult for him to do manual labour.

Fearing he would be imprisoned for years – or worse – he left Syria, came to Lebanon with his teenaged children and got a job washing cars for between 90 cents and $1.80 a day. His employer gave the family a room, but Mr. Nawara was terrified someone would break in and sexually assault his daughters.

"I used to lock my daughters in the room all day," he recalls. "I used to come four or five times a day to check on them."

The only other refugee Mr. Nawara knew in Lebanon was a woman from the same region of Syria. He asked her to look after the girls and she agreed, with a condition. The woman had a teenaged son, and since it wouldn't be culturally acceptable for unrelated girls and boys to stay in the same space, Mr. Nawara's eldest daughter and the boy became bride and groom when both were 15.

In Lebanon, there is no state law preventing child marriages. Many Syrian families chose to make their daughters brides for both economic reasons and for cultural ones, tied to their concept of honour.

Some refugees – uprooted from the security of their families and communities – fear their daughters may go out with boys or be raped, both of which would be shameful for the family, says Ms. El Ammar from the anti-violence group.

"They are actually getting rid of an economic burden and sometimes they think it is a way to protect the girl from harassment, from bad reputation."

But it doesn't always work out that way. 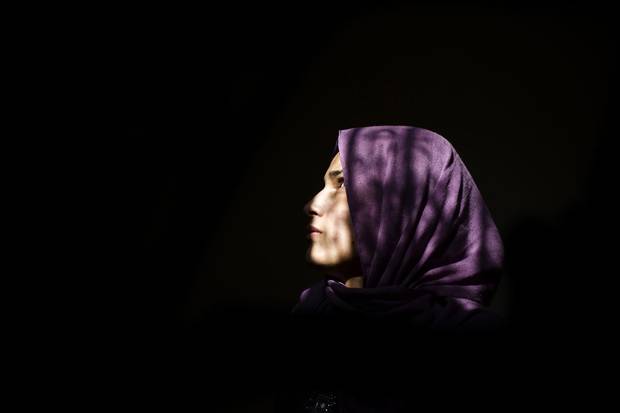 Baraa, an 18-year-old Syrian refugee, is now divorced from the 23-year-old man she was married to when she was 15. She says her husband beat her with pipes, burned her with cigarettes and forced her to work on the land.

'He used to beat me with the pipes'

At 18, Baraa, who does not want her full name published, finalized her divorce a month ago.

She now lives with her mother and sister in a poor area of the Lebanese town of Chtaura. Sitting on a tattered sofa, wearing a beaded lavender abaya, she tells her story in a soft voice.

Baraa is originally from Aleppo but came to Lebanon four years ago. Her family had no money or resources. When she was 15, a 23-year-old man asked the family to marry her and she agreed, saying she didn't feel like she had a choice.

"He used to beat me with the pipes and he forced me to work on the land outside," she recalls.

Baraa says her husband burned her with cigarettes and refused to let her to see a doctor when she was sick. She finally left when he held a pillow over her face for so long she was afraid she would die.

Eight months after the wedding, she returned home to her mother. She doesn't know how she was lucky enough not to get pregnant while living with her husband.

But when the physical pain ended, the emotional despair set in.

"Our society talks about you a lot. They say, 'She's a divorced woman,'" Baraa says through tears. She became depressed and took pills in a suicide attempt. She rolls up her sleeve to reveal a thin forearm scarred by self-mutilation.

People in the community "used to tell , 'So what? Even if he beats you and did this or that to you, you should stay with him. Maybe you are not a good person,'" her mother recalls.

Baraa says her husband tried to force her to come back to him. She only started to feel better when the court finally formalized the divorce, two years after she left him.

Now, she doesn't even worry about whether or not someone else will marry her. She just thinks about learning to read and write. She's illiterate, unable to write her own name, but there are very few resources in Lebanon for adult students.

The effects of this generation of Syrian girls and young women missing out on their education will be felt for decades to come, says Prof. DeJong of the American University of Beirut.

Women who have gone to school are more likely to send their own children to school, and uneducated young mothers have a higher risk of maternal mortality and their children of child mortality, she says.

"If someone is more educated, they will have better autonomy, be in more of a position to get better jobs and their pattern of going to health-care services is also much more well-informed."

Like any young mother, Ms. Nawara dreams of a better life for her family.

"I dream of having my own room," she says, and "to be able to get something that makes me happy, makes my son happy and my husband happy." 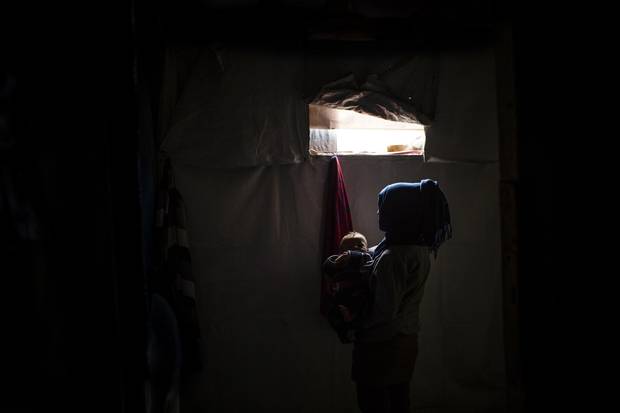 Kawthar Nawara says it was the situation in Lebanon, and not any person, that forced her to get married. Now she dreams that her situation will change.