By Amy Zayed for BBC

When their home country was torn apart by war, the members of the Orchestra of Syrian Musicians were dispersed around the world. Last month, they were brought together again for brief tour, aided by Damon Albarn. The BBC World Service went behind the scenes of the rehearsals.

The Q Factory, a hip rehearsal space in east Amsterdam, is the unlikely venue for an emotional reunion.

Here, 50 members of the Syrian Orchestra for Arabic Music have gathered to rehearse for their first concert together since civil war tore their nation apart. Many of them have not seen each other for five years.

"I cannot describe how it felt when we finally met again", says singer Mais Harb. "There were lots of tears, lots of hugging, lots of happiness."

Harb lives in Damascus and was lucky to get a visa permitting her to play this tour - which takes in Amsterdam, Glastonbury, London, Istanbul and the Roskilde Festival in Denmark.

"It is sad though", says Firas Sharestan, who plays the qanun, an instrument that could well be part of the harp family, yet has 76 strings.

"We have these 10 days and afterwards everyone will go back to where they were before, and nobody knows when we will meet again."

The reunion has been masterminded by Blur frontman and musical polymath Damon Albarn, and his Africa Express project.

"I played with the Syrian National Orchestra back in 2010 with my band Gorillaz," he explains. "Six months after that the war broke out, and I felt sad and angry and helpless. I just felt I wanted to get my friends back together. These are families. Brothers and sisters.

"Also, the average person didn't know much about Syria before the war started, so all we get to hear and see are these ugly war scenes.

"The Arab world has more to offer than this. This concert is about the power and beauty and richness of Syrian music."

Conductor Issam Rafea, now based in the US, said the situation in Syria was "beyond our imagination", prompting thousands of people - not just musicians - to flee the country.

He hopes the music will act as a "universal language" - uniting not only traditional Arabic music in general, or Syrian music in particular, but west African influences, delivered by Mauritanian singer Noura; indie influences from Julia Holter and Paul Weller; and rap from Syrian-Lebanese duo Malika and Boo Kalthoum. 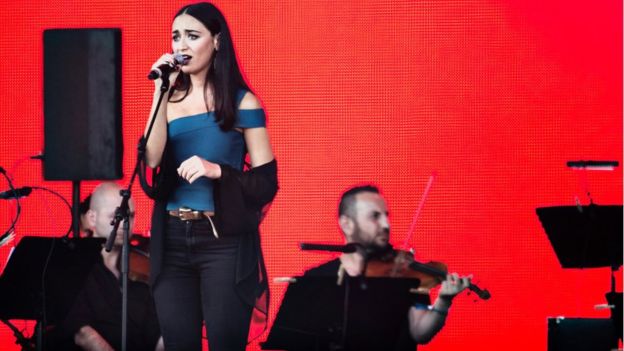 Singer Faia Younan had a viral hit with the poignant song For My Homeland, which she recorded with her sister Rihan

"We are a family", says Malika, the only working female MC in the Arab world. "We have to deliver as a team! I am so happy we were invited onto this trip."

She and her partner only rap in Arabic, she says. "The thing is, I wanted to write a song back in 2006 when Lebanon was at war with Israel," Malika recalls.

Their music is not specifically about the war, but reflects Arabic youth culture at its most vibrant. Their intention is to send the message that there is more to Syria than death and destruction.

Taking a similar approach is Faia Younan - another guest singer, who was born in Aleppo but now lives in Beirut.

"I sing songs that are not primarily about the war itself, but somehow deal with its existence," she says.

"For example, I have recently sung a song about a mother humming her child to sleep not knowing if the next day was going to be a good day or not, if her child was going to survive or not.

"So she sings: 'Sleep my little bird, tomorrow everything will be better'. It is a bittersweet song, but it doesn't deal with the war explicitly." 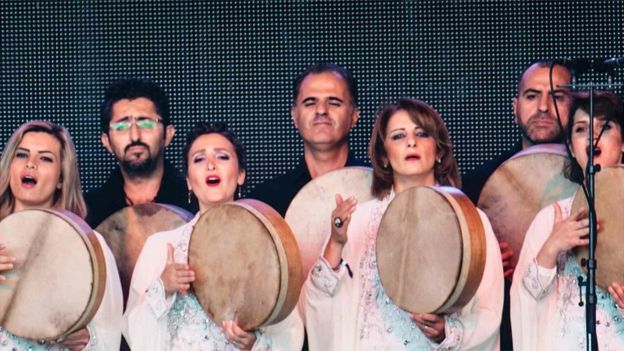 After performing together for years, the musicians are now spread all over Europe and the Middle East

The concerts are a passion project for Albarn, who has been a fan of Arabic music for as long as he can remember.

"My love affair with Arabic music goes back a long time. In 1974, my dad went to Iraq and wrote two amazing books about Islamic pattern . So the music was somehow always there in our household. We had a bit of a more Sufi outlook on things, but I always felt connected to it".

In rehearsals, Albarn's knowledge of, and connection to, the music becomes apparent. He strives to make things sound perfect but, more importantly, he wants the orchestra and the oriental influence to be predominant.

"There sometimes are teething problems in the musical language, so sometimes you need to change a note in favour of the oriental instruments and the choir to shine," he says.

Both at the rehearsals and on stage, there is a certain magic - something indescribable, something that could only happen in a room full of people who share a passion for music, a love for one other, and the inclination to deliver a concert that makes people happy.

Performing in London's Royal Festival Hall, the musicians stress that "tonight we see the real face of Syria: Art and music and culture".

When the choir lift up their hands to make heart signs, the audience stand and respond in kind.