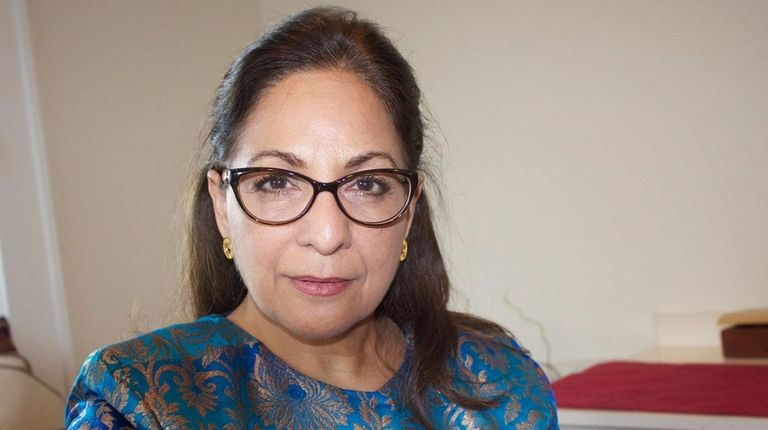 Daisy Khan is the author of "Born With Wings." Photo Credit: Victoria Fleitz

Daisy Khan, originally from Kashmir, India, is a Muslim peace activist who began her writing career at the age of 21 with an op-ed in this newspaper. A graduate of Jericho High School who went on to study at LIU Post and the New York School of Interior Design, Khan found herself appalled when, following the Iranian Revolution and the hostage crisis, an oversimplification — and sometimes outright vilification — of Islam began to take hold in the American media. In her Newsday piece, Khan asserted that “Islam teaches us Muslims to propagate freedom of thought, justice, forgiveness, honor and sublimity.”

That sentence expresses the idea that has driven her career until the present day; it lies at the heart of her new memoir, “Born With Wings: The Spiritual Journey of a Modern Muslim Woman” (Spiegel and Grau, 351 pp., $28). Kahn is married to well-known Imam Feisal Abdul Rauf, who had to spend several months in hiding in 2010 due to threats on his life arising from the controversial plan to build a community center near Ground Zero. Khan spoke to Newsday by phone; the interview has been edited for length and clarity.

When you arrived on Long Island in 1974, you were treated as an outsider. How did field hockey help turn that around?

As a new student at Jericho High School, I knew I had to find some way to get involved with the culture. I looked out the window one day and saw the field hockey team practicing. Having played both forward and goalie back home in Kashmir, I spoke to Mrs. Schwartz, the phys ed teacher, about joining the team. “Do you know how to play?” she asked. When I assured her I did, she said, “Grab a stick.” The Jericho team had been having a dismal performance that year, so when I started running around everyone and scoring goal after goal, I was quickly welcomed on the team. Later in the season, when we won a championship, the girls lifted me on their shoulders and carried me around the field. But that night at the celebration dinner at an Italian restaurant, I stared at my bowl of spaghetti, mortified. I had no idea how to eat it. Then Mrs. Schwartz leaned over and showed me how to twirl it up with a fork and spoon. Every time I’ve eaten spaghetti for the rest of my life, I think of her.

As the 20th anniversary of 9/11 looms, how do you see the situation of Muslims in the United States unfolding?

We seem to be at a crossroads right now, with bleak news from the current leadership, divisiveness and polarization. Some of the bridges that were built after 9/11 are at risk. Yet there’s a glimmer of hope: the media portrayal of Muslims and of Islam is much more nuanced that it once was. Part of that is because domestic terrorism has taught people that not all attacks should be instantly blamed on international groups. At the same time, many Muslims have stepped up to help change the stereotypes. Despite the burnings and attacks, 80 percent of mosques now have outreach programs and open houses.

And on the culinary front, things are really going well! Falafel and hummus and kebabs have become the new comfort food. Not so long ago, my husband and I were on a plane, and we heard one of the attendants call to the other, “Where’s the hummus?” We looked at each other. “Islam has arrived,” my husband said.