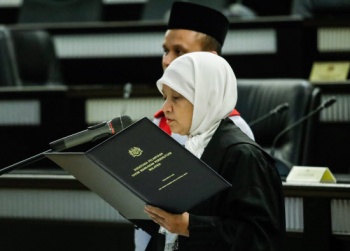 PUTRAJAYA: Tan Sri Zaharah Ibrahim was today sworn in as Chief Judge of Malaya — the second female to be appointed to the position.

Her appointment follows the consent of Yang di-Pertuan Agong Sultan Muhammad V on July 11, under advise from Prime Minister Tun Dr Mahathir Mohamed and after convening with the Council of Rulers.

When asked by the media, she briefly said she was proud to be appointed to the role.

Zaharah, 65, who is a mother of three, took her oath in front of Senior High Court Judge Datuk Su Geok Yim and assumed the third highest ranking position in the judiciary of Malaysia.

Before this, Tan Sri Siti Norma Yaakob was the first lady who was the Chief Judge of Malaya from 2005 to 2007.

Zaharah takes over from predecessor Tan Sri Ahmad Maarop, who was promoted to President of the Court of Appeal on July 12.

Also present at the Palace of Justice in Putrajaya were Attorney-General Tommy Thomas and a representative of the Bar Council president.

Some of the senior members of the Malaysian judiciary who were present were the new Chief Judge of Sabah and Sarawak Datuk David Wong Dak Wah and Federal Court Chief Registrar Datuk Seri Latifah Mohd Tahar.

Zaharah who was a Federal court judge for three years before this, graduated from University Malaya with a Bachelors degree in Law in 1977 and started her career in the legal fraternity as a contractual Legal Officer in the same year.

She has had an impressive career with about 41 years in the judiciary with various posts including as a magistrate in Malacca.

Zaharah also served as Selangor state legal adviser for about two years from April 1, 1994 to May 1996.

Aside from a brief five-month stint as the director of intellectual property under the then Ministry of Domestic Trade and Consumer Affairs in 1992, Zaharah spent about half of her career working in the Attorney-General's Chambers' division that drafts laws to be passed in Dewan Rakyat.