By Altaf Hussain Asad for The News On Sunday

— In conversation with Irfan Ahmed Urfi 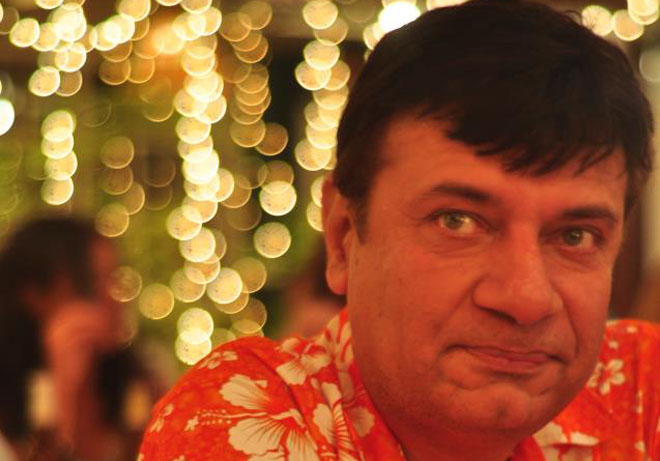 Irfan Ahmed Urfi is an Urdu short story writer whose first book Paon was warmly received by serious readers and critics alike. He is also known as an eminent screenplay writer of TV drama and film who has deftly tackled many issues which are brushed under the carpet in the name of so-called morality. Zip- Chup Raho, Nail Polish, Band Khirkion Kay Peechay and Lamha are some television plays which drew lot of flak from certain quarters for their bold themes.

His second book of stories Aasman Se Sargoshi is about to hit the book stores within a few weeks. A man of diverse talents, Urfi doesn’t consider himself to be an artist as he thinks he “is still learning to write stories”.

Here is his interview for TNS that was done in his study room which looks more like a library. Excerpts follow:

The News on Sunday: What made you drift towards art and literature?

Irfan Ahmed Urfi: During my early childhood, I was into everything — story writing, poetry and sketching. I had even started writing lyrics, developing tunes, and singing, as parallel passions in addition to storytelling.

As a child, I wanted to be a jack of all trades. In those days children’s literature including stories like Aali per kya guzri and Maira naam Mungoo was so engaging and inspirational that I started writing novels in the popular medium of Batasveer kahani, just like comic books. I still remember, between 9 to 16 years, I had written more than 40 novels (150 to 250 pages each) on my own, along with self-sketched illustrations of the characters. They even had lyrics between the chapters just like songs incorporated in films. Meant for myself and close friends, they were a ridiculous blend of adult and teen-aged fantasies.

My grandfather (Nana) Peer Fazal Gujrati was a legendary Punjabi poet and had a great influence on my parents’ upbringing. Khaqan Khawar (maternal uncle), though a low profile but a prominent name of modern Urdu poetry, was also a close friend of both of my parents and a regular visitor at our home. In such an open and art-loving atmosphere, one can definitely expect from the youngest and most pampered kid to choose a comfort zone of his own choice, in his struggle for becoming something from nothing.

Sexuality, gender, religion and politics are all dots which need to be explored in order to dig out the hidden truth about my protagonist who is a human being, as the story revolves around you and me, not any divine being or an alien.
TNS: In a way what you are trying to say is that creativity is a journey from nothingness to becoming something?

IAU: Instead of intellectualising this, I would rather comment that no one is born a writer or a poet. That’s how I perceive it; you are welcome to disagree. I think humans are born with an emptiness and cluelessness. Though we inherit some personality traits and there could be some genetics too in the form of diseases and healthiness. Hollowness is definitely a challenge to be faced by a sane person at a certain age. We are continuously escaping ourselves from the horrifying reality of meaninglessness.

As a result, man (being used for all three genders) turns out to be a tactful and skilful being. To maintain his denial and to gain respectability, he claims this façade as his transformation or development .This leads to narcissism. Here the process of self-endorsement starts, and gradually our ego starts becoming habitual — of being massaged by fellow human beings. To further upgrade this deception, we love to label this twist as an experience of creativity and intuition.

That’s how we try to stuff our emptiness. We cling to socially acceptable identities such as writer, poet, politician and priest for our survival as a thinking social animal in this edgeless planet of earth. Art as a medium of expression actually caters to this quest of identity and recognition.

TNS: So are you trying to say it is just a matter of coincidence to become a writer? No one deserves to be admired for their extra ordinary talent?

IAU: The myth of creative imagination is definitely not associated with stones, water and wood. Man being the most clever has learnt the art of exploiting this instinct to maintain supremacy not only among all species but within the community of his/her own world.

During my student life I came across amazing stars of literature like Farooq Ali Shah, Jamil Malik, Rasheed Amjad, Irfan Siddiqui, Jalil Ali, Fateh Muhammad Malik (irrespective of their right or left wings inclinations). All of them were Asaatza (teachers) and influenced a generation of youngsters of that Zia era who were wandering aimlessly in search of an intellectual identity.

Then, of course, as someone living in Islamabad, how could a young man avoid the awe of three big ‘Ms’, meaning Mumtaz Mufti, Mansha Yad and Mazahar-ul-Islam. Islamabad was a city of fiction writers. Mansha sahib was a dedicated literary activist and Mazharul Islam has his own style of leaving impact on his following generation of writers. The three maestros spread positive and energetic vibes for those who want to seek faiz.

TNS: Sexuality, gender, religion and modern day’s global political connotation are the major themes of Paon. These themes seem to be close to your heart.

IAU: As a writer, I am not supposed to be selective in themes. I just need to plug my intellectual faculties in my surroundings with an extraordinary alertness. While knitting a story, I just have to discover the invisible or unexplored bridges between the scattered dots of a certain plot or a happening which needs to be zoomed in — to dig out the hidden truth of that particular scenario. If dots are bridged successfully and there appears a sketch, one can find a beginning, build up and climax or an impact that provokes the thought process of my audience. Then, the story is complete.

Sexuality, gender, religion and politics are all dots which need to be explored in order to dig out the hidden truth about my protagonist who is a human being, as the story revolves around you and me, not any divine being or an alien.

TNS: Tell us something about your experience of writing for film and television?

IAU: We grew up watching television plays written by popular literary figures of that time. But by the time I got an opportunity to work, the creative content had already been hijacked by the marketing personnel for purely commercial purposes. Right now, writers of women digests are ruling the roost as they serve the commercial purpose better. Writing commercial stuff is a sort of job for me as it has nothing to do with literature.

I have written a good number of short films/long teleplays, tackling the issues of extremism, religious bigotry etc. as a communication project for the development sector. They were also aired on the mainstream media.

TNS: Tell us about the second collection?

IAU: As far as my next collection is concerned, it will focus on the issue of human survival in times of the challenging globalisation. It will also touch on how we are wreaking havoc on our ecological resources by turning the earth from a livable place to a non-livable one.