This thriving Moroccan city — and its sense of lawlessness and anything-goes ethos — has inspired Western men for decades. Traveling while female, though, proved to be a challenge.

Our columnist, Jada Yuan, is visiting each destination on our 52 Places to Go in 2018 list. This dispatch brings her to Tangier, Morocco, which took the No. 47 spot on the list; it is the 30th stop on Jada’s itinerary.

“Siéntase, siéntase” — sit down, sit down, she said, patting the seat next to her.

I had already noticed her in the terminal of the 11 p.m. ferry we were taking from Tarifa on the southern tip of Spain to Tangier on Morocco’s northern coast. Among all the young, cosmopolitan Spanish tourists in their linen palazzo pants, she stood out. She was wearing a traditional black head scarf and a black embroidered tunic, and looked to be about 40 years older than the next-oldest person there, who might have been 40-year-old me.

Her name was Mina, she said in Spanish. When I asked how to spell it, she gave me her passport, because she can’t read or write. The only words not in Arabic were her last name, M’rabet, and her birth year: 1939.

“I am Moroccan, I have a house in Tangier, but I was born in Spain,” she said. She was coming back from three weeks visiting her sister who runs a hotel near the sea. Over a shared Coca-Cola on the ferry we talked of God and death and that once she had seen Paris and how beautiful it had been.

I needed to be careful in Morocco, she told me. Keep my purse always at my side. Don’t walk by myself as a woman and be prepared for everyone to ask me for money. I’d heard all of this — and worse — before, of the particular discomfort that greets women traveling in Morocco.

This is a thriving city, with a sense of lawlessness and an anything-goes ethos that has inspired Western men for decades. And while it was easy to see Tangier’s many appeals — the warm hospitality, the delicious food, the stunning desert-by-the-sea landscape — I couldn’t help but feel jealous of those who had been able to enjoy that idyll without being followed (quite literally) by harassment and verbal degradation.

‘You Are a Friend of Mine’

It was 1 a.m. Ferry passengers had disembarked in Tangier, and Mina was still with me, having stayed to help as a police officer rifled through my bag, and then to join me in a taxi to my sweet, modest hotel in the medina, Dar Yasmine. Despite the hour, the streets were packed when we pulled up; summer days in Tangier are so hot the city comes alive mostly after sundown. A young man who spoke English tried to walk me to my hotel — which was right in front of me — as Mina blocked his way and kept whispering to me in Spanish to be careful, that everyone here wanted my money.

Traveling to so many places on my own, I have developed a set of safety triggers around strangers. With Mina, though, I felt a kinship as journeywomen who had crossed continents and the Strait of Gibraltar together in the middle of the night — and, I thought, maybe she did, too.

Instead of going into the hotel, I threw off caution and followed Mina uphill through the brick streets of the medina with my backpack and roller suitcase to an open-wall, street-side food stand named Ray Charley — essentially six stools and a counter with a little kitchen and two cooks, both named Sayed. It was a beautiful night of cultural immersion that ultimately turned a tad worrying when Mina walked me back to my hotel, sat down in reception and refused to leave.

She was confused, the manager said, because she thought I was staying with her. He reassured her that he had a room for me. “Mi amiga, mi amiga, él es un hombre bueno,” she said, kissing my cheeks goodbye. “Remember, nothing can happen to you here, you are a friend of mine.”

I had wanted to see Mina again, to take her up on her offer of tea and couscous, but she didn't have a telephone and couldn't tell me her address. But I have thought about her often. Was my gut wrong? All I know is that travel has made me believe that most people around the world are fundamentally good. And it’s exhausting to always have your guard up, expecting the worst.

Two friends, Linda and Melanie, had come to join me in Tangier. They represented strength in numbers. We were all eager to explore the city, and none of us wanted to do it as a woman traveling alone.

Female tourists, locals assured us, are fine without headscarves and with their knees showing (I was the only one in our group who did the latter), but you will get stares. We decided against tea at the famed Café Tingis in the medina because there was not a woman among the 50 or so crowded inside and out. Every time we took a walk, we’d get catcalled. Mostly that meant a lot of “holas,” but we were also followed for blocks, and Melanie said that multiple men hissed in her face.

A trip to the popular Caves of Hercules and Plage Achakar beach about 30 minutes away brought further cultural nuances. Nearly every woman waded into the ocean in whatever long dress she’d worn there, while shirtless men in swim trunks played soccer and body surfed. The women seemed happy, wet fabric and all. And the few who wore swimsuits moved about freely, without extra attention.

Every morning we had breakfast on Dar Yasmine’s rooftop terrace overlooking the harbor and at the exact height of the green and white marble tower of the city’s Grand Mosque right across the street, an example of the wealth of ornate, colorful architecture around the city. We felt lucky to be there during Throne Day, a national holiday celebrating the anniversary of the accession of the current King Mohammed VI, and to see fireworks light up the entire medina.

Where Woman Can Go in Peace

By nature, a Moroccan city’s medina quarter, or old town, is its throbbing-with-life traditional center. Tangier’s is enclosed in the walls of a 15th-century Portuguese fortress, with charming, twisted, narrow streets painted in a riot of colors. It is here that you will do your best shopping for tunics and gold-patterned silk shoes, and indulge in an abundance of fresh marinated olives and other delights, piled high at stand after stand in the souk (marketplace). I would have come back every day for prickly pear fruits peeled at a roving cart, and avocado-and-milk smoothies at the World of Juices stand just outside the wall. If you want to buy an entire severed cow’s head, they have that too.

Harassment was thickest in those close quarters, but I felt O.K. about safety, when not faced with careening cars and mopeds. Tangier had earned a spot on the 52 Places list not for its old town, though, but because of its rapid modernization: a refurbished port, new highways, a high-speed train connecting it with Casablanca and Rabat. (It missed its scheduled summer start date, but a cabdriver told me he’d seen a 400-kilometer-per-hour test run “with my own eyes!”)

The “new Tangier” comes with welcome breathing room. we particularly enjoyed strolling along Tangier’s long, wide waterfront at night, which seemed to be a regular pastime for many locals. Tourist-filled but tasty restaurants like El Morocco Club and Rif Kebdani provided for restful dinners — and in the case of El Morocco, the only proper cocktails we had during our stay.

Our favorite nighttime spot was The Tangerinn Pub, a famous hangout for the Beat Generation, outside the medina. It was small and dark, with paintings of Burroughs and quotes from “Naked Lunch” on the walls, and a neon nightclub vibe that it likely didn't have in the ’50s. We sat at the bar, unbothered, and were later joined by two young Moroccan woman, who told us this was their favorite place in town. One, named Awatif, wore tight jeans and an orange ruffled blouse that exposed both her shoulders. “I never cover up,” she said. “You can live however you want. You can choose your own life.”

Getaways: The Blue City and Luxury That Makes Sense

It was in Chefchaouen, nestled in the Rif Mountains, about two hours by car from Tangier, that we had our first experience of walking around with complete ease. Part of that was because we’d signed up for a Viator guided tour with Ahmed Achtot ($176 for two to four people). He had grown up in Chefchaouen, and every shopkeeper knew him. It felt like being with the mayor.

Long ago, the people of Chefchaouen started painting their buildings blue. Ahmed said it was to keep the mosquitoes away and also was inherited as a tradition from Jewish immigrants, who started coming over in 1492 from Granada and left en mass in 1948, thanks to the founding of Israel and tensions over the Arab-Israeli War. I asked if it was also for the purpose of drawing in tourists. “Of course,” he said.

Our real getaway, though, came when we treated ourselves to a ridiculously expensive room at the two-year-old Banyan Tree Resort in Tamouda Bay. It’s on the coast, a two-hour drive east from Tangier, on the same stretch of beach where the king keeps his summer residence.

The reception area was next to an enormous, shallow, blue decorative infinity pool lit with fire pits at night. Every room is an actual villa with a private pool. Golf carts picked us up at our door to take us to one of the three restaurants on site. After the blandest tagine and kebabs of the trip, we walked straight into the Mediterranean Sea. 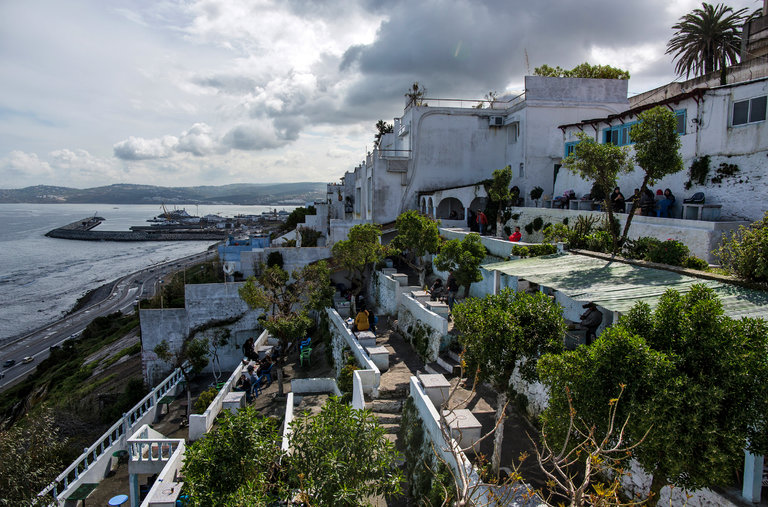 While enjoying mint tea at Tangier’s famous Café Hafa, a spot with tiered outdoor seating perched on a cliff overlooking the sea, I was fortunate enough to bookend my trip with a budding Moroccan journeywoman half my age. Her name was Asmae, a recent engineering graduate. She was from Errachidia, a conservative town in the country’s East, and was visiting on a two-week vacation with a male friend and his sister. The only way a woman can travel is in the company of her family or a man, she said.

“My dream is to have a backpack and go off on my own,” she said, expressing a hope that so many Western kids take for granted. She had never been outside Morocco, though, because getting a visa seemed impossible. Tangier, she said, struck her as such an incredibly modern place compared to her hometown. The streets were clean, and she got harassed so much less than usual. “Everyone here is so polite!”

Canada was the first place she wanted to see, she said, both because it’s the home of an idol of hers, the YouTube star Lilly Singh, and because it seemed more attainable than America. “I don’t know if you know the show ‘The Handmaid’s Tale’,” she said. “I sometimes feel like it is here. Women are always under a man.”

But something told me, if anyone could fulfill a dream of solo travel, it would be her. “I am a rebel,” she said with an enormous grin. “I don’t find anyone as ambitious as me.”