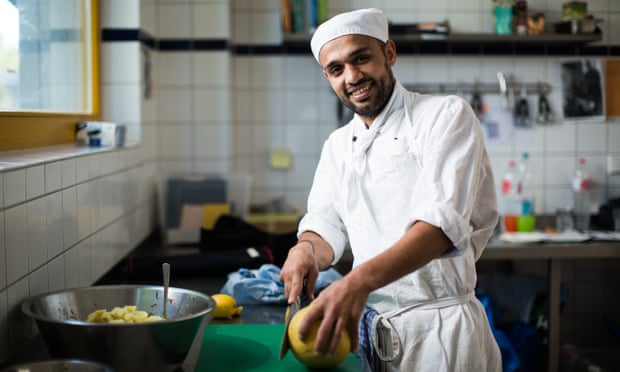 It’s breakfast time at a care home in Neubrandenburg and Zia Hayafi is busy. He is gently moving an elderly woman from her bed into a wheelchair. He should be hurrying – they are waiting for her in the dining room. But he takes his time, moving close to her ear to ask: “Did you sleep well?” She nods.

“I like old people,” he says. “When I’m that old, I’m going to want someone nice around to look after me.”

Hayafi, 20, has been working here for three months. It is about as different as can be imagined from his former life as an officer in the Afghan police force. There, the big concern was the Taliban (Hayafi, an ethnic Hazara, eventually fled). Here, the concern is whether Germany will let him stay.

It should give it serious thought. Germany faces skills gaps across its economy that will only widen as the population ages. But it has also welcomed more than 1 million refugees in little more than two years. Programmes have sprung up trying to solve the former with the latter, aided by laws that look more kindly on asylum seekers working, something that is in effect forbidden in France and the UK.

But although 400,000 German companies have employed asylum seekers in one form or another, the majority have been taken on under short-term arrangements such as internships and placements, which do not always have a happy ending.

According to statistics, every third trainee in Germany would have to opt for geriatric care at present to counteract the shortage of skilled workers. In fact, fewer than one in 10 do so. People like Hayafi should be a godsend. 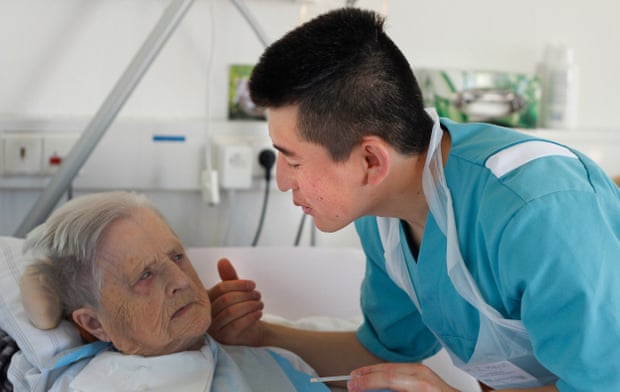 But it is not clear that he will even complete the training. His original asylum request was refused, as is increasingly common with Afghans in Europe. He could be deported at any time, but he is appealing against the decision. “I want to earn good money and buy a house,” he says.

About 150 miles (240km) west, Hannah Hillebrand is having a tough time with her trainees in the kitchen. Zabi has forgotten to put sugar in the dough, Hassan is peeling hot potatoes with his bare hands and Saeed is trying to fillet a fish with the wrong knife.

Hillebrand is a leader of the Refugee Canteen project in Hamburg, which gives newcomers 14 weeks of hands-on experience in its kitchen before securing them a six-week internship in a restaurant or cafe. She spent three months writing a training manual containing recipes and key facts about German cooking, but her six pupils cannot do much with it. The text is too long and the terminology is alien. She must start with the basics.

Most German businesses report positive experiences of hiring refugees, says Stephanie Anders, coordinator of refugee integration at the Hamburg Chamber of Commerce. The companies have been pleased that the apprentices are keen to learn, Anders says, adding: “Many have been disappointed in recent years by German young people who have a school leaving [certificate] but come to work completely listless.”

But there are significant hurdles, as Hillebrand is experiencing. Aref is good at preparing potato salad, but when he is asked to get limes out of the fridge, he doesn’t move. He does not know what limes are, but he dare not admit it. “They look like green lemons,” says Hillebrand.

“I’m nervous because I’m worried that I won’t understand everything,” says Saeed, who is soon to undertake his six-week placement in a restaurant. Like many others here, he had never set foot in a kitchen before he came to Germany. In Afghanistan, it was his mother who cooked.