By Dania Allkhouli for MALA 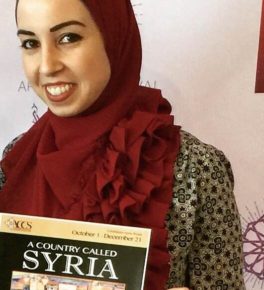 Dania Allkhouli is currently working on her second poetry book and preparing to focus on a memoir that speaks on domestic abuse and how religious misinterpretations and cultural traditions enable the cycle.

This year, MALA is spotlighting individual stories from men and women who take a stand to eliminate violence against women, both nationally and globally. Our community looks forward to supporting UN Women’s Orange the World Campaign to support efforts to end violence against women and girls worldwide. UN Women and partners around the world are marking the 16 Days of Activism Against Gender-Based Violence, launching from International Day for the Elimination of Violence against Women on November 25th until UN’s International Human Rights Day on December 10th.

I was born in LA but raised in Orange County, where I grew up with my parents and two brothers. Education was and still remains a key element instilled within me by my parents. Not only were we striving to achieve high marks in school, but we were encouraged to keep up with our cultural and religious studies as well. A common theme throughout my life was expressing my thoughts and emotions through the art of writing. Soon enough my words turned into poetry and blogging, that has led me to publishing the first book.

Being a Muslim-American has truly been a blessing. Despite a few encounters with discriminatory episodes, I never really let it faze me. I grew up in an environment of interfaith that enabled me to see the beautiful diversity of America—the cultures, the religions and the perspectives. I remain proud of my Muslim-American identity and have been wearing the head cover for over 20 years and it’s an honor to represent this hyphenated heritage.

The word feminist always creates quite the buzz. I read somewhere recently that there’s an initiative or an attempt to launch an initiative to erase the term from society. The goal is to establish a world where people are defined as either sexist or not. I kind of like that idea, but until then, the term feminist does remain an identifying term that I do use because at the end of the day, it does call for equality among the sexes. I see feminism as a movement to empower women who are frequently marginalized for their sex and it highly correlates with my identity as a Muslim woman because it enables me to proudly assert my religious and social rights. Being a feminist also means that I strive to live my life with justice, not only for women but for men as well. I think that is something overlooked.

What I am most proud of is establishing the nonprofit organization, A Country Called Syria, with my mother four and a half years ago. We were eager to do something that would highlight Syria and its history and culture to the world so that the public could see Syria beyond what the media portrays. What started out as a simple set of display-tables showcasing household items has turned into a full-fledged gallery/exhibition rotating across fine venues in Southern California. We’ve been featured in both The Orange County Register and The Los Angeles Times and hope to expand the organization further by sharing the exhibition nationwide, while still having a permanent location here in Southern California.

Change is an inevitable part of life. Ironically it is the one constant of life. Almost ten years ago I had a ten-year plan where I expected to have a PhD. and two more books published and I was on the path to become a licensed marriage and family therapist. After obtaining my Bachelor’s in Sociology, I worked at a nonprofit organization and it introduced me to an array of new things. I ended up obtaining a Master’s in Public Policy and Administration after publishing my first book of poetry, and am now running my own nonprofit.

I hope to impact the world through words of inspiration. Throughout my years of writing, I have had many people privately reach out to tell me that they found their strength and courage to speak up about their experiences or found someone who could put into words the issues that they often feel afraid of speaking out. This includes domestic violence, sexism, culture, religion and social issues. I want to continue down this path of being bold—as many have called me—for addressing what has been historically swept under the rug, especially in the Middle Eastern and Muslim communities.