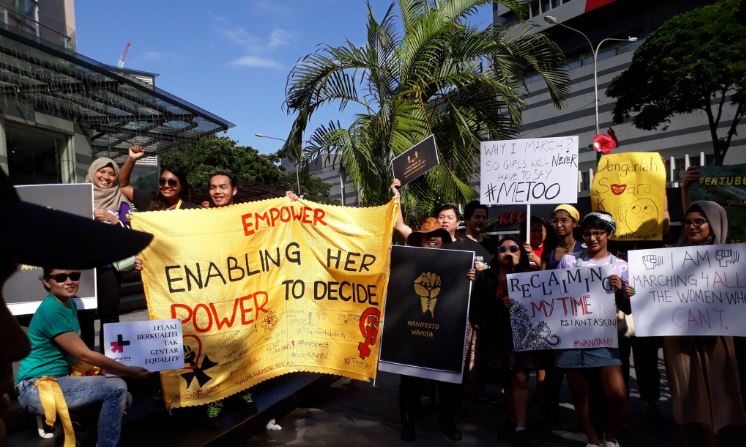 On March 10 this year, hundreds of Malaysian women – and some men – took to the streets of the capital city Kuala Lumpur to demand for women’s rights.

The state of women’s rights in the country is mixed: On one hand, women outnumber men in the undergraduate level. Malaysia is also seen as a moderate Islamic country which has always allowed women to work and vote. However, figures by the Khazanah Research Institute's (KRI) in 2016 placed the country at 106th out of 144 countries in terms of the lowest number of women in the workforce.

To add to the problem, despite increasing modernity, Malaysia is also seeing a rise of Islamic fundamentalism since the early 1970s, which human rights defenders say is impinging on the rights of women. Syariah legal system (Islamic legal system) exists side by side with secular laws (criminal and civil) and has influence on the lives of Muslims in matters such as marriage, inheritance and apostasy. These Syariah laws usually favor men.

Fed up at the regression of women’s rights in the country, a group of mostly left-wing youths called the ‘Women’s Emancipation Movement’ organised this year’s women’s right’s march. This year’s slogan was “Reclaiming back our space.” Among the demands were: end gender discrimination, end the culture of rape and sexual harassment, uphold democracy and demand for pay equality.

“Through this march, we hope that every group and individual who attend get to meet and build solidarity, therefore strengthening the grassroots movement. In the long run, we hope for more participatory democracy in the country,” Shaqirah Shauqi said.

The petite but charismatic young woman was one of the march’s key mobilisers and one of two people who stood in a truck, leading the march using a loudspeaker. They led the protest with chants such as “Bila negara sakit, wanita bangkit!” (“When the country is ill, women rise!”). Despite the hot weather, the protesters obliged and chanted along passionately.

The participants held up creative banners. Some of them were: “If you are not angry, you are not paying attention”; “There is no space for the patriarchy” and “March like a girl”.

Passionate speeches were made. Each group had a slot to speak, including the LGBT community.

It is not sure yet what concrete outcomes the march will bring. Malaysians will go the polls this May 9. For 61 years, the country has been ruled by the Barisan Nasional (also known as BN) with an almost iron-like clad fist. There is excitement that this time around that BN will be toppled by Pakatan Harapan, a four-party alliance, although some women’s rights defenders may argue that neither side has been particularly sensitive to the state of women’s rights in the country.

Time will only tell. But at this moment, it is safe to say, that the women’s march caused at least a little ripple in the history of women’ rights in the country.

Mohani Niza is a journalist and activist from Kuala Lumpur, Malaysia.