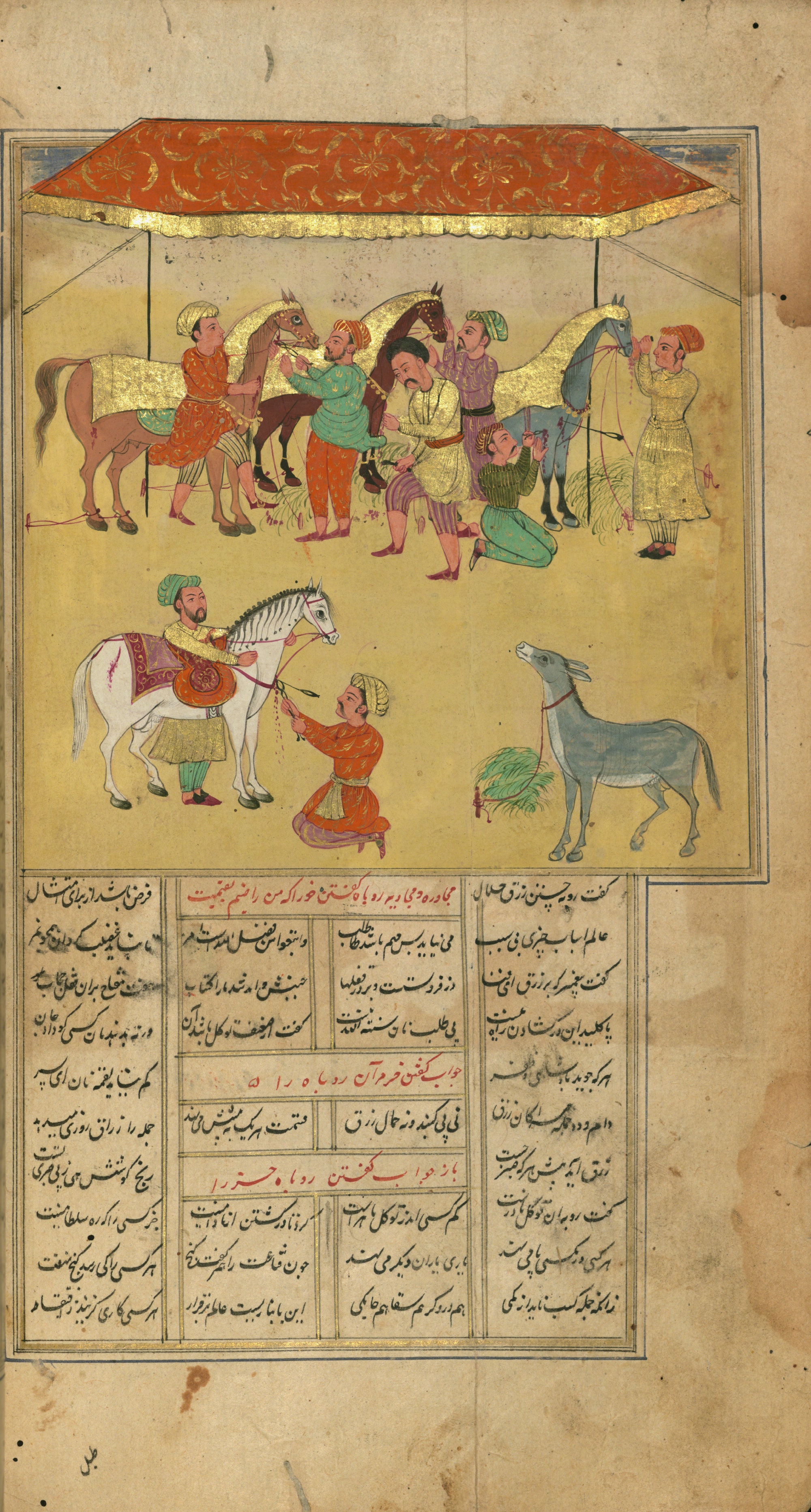 A couple of years ago, when Coldplay’s Chris Martin was going through a divorce from the actress Gwyneth Paltrow and feeling down, a friend gave him a book to lift his spirits. It was a collection of poetry by Jalaluddin Rumi, the thirteenth-century Persian poet, translated by Coleman Barks. “It kind of changed my life,” Martin said later, in an interview. A track from Coldplay’s most recent album features Barks reciting one of the poems: “This being human is a guest house / Every morning a new arrival / A joy, a depression, a meanness, / some momentary awareness comes / as an unexpected visitor.”

Rumi has helped the spiritual journeys of other celebrities—Madonna, Tilda Swinton—some of whom similarly incorporated his work into theirs. Aphorisms attributed to Rumi circulate daily on social media, offering motivation. “If you are irritated by every rub, how will you ever get polished,” one of them goes. Or, “Every moment I shape my destiny with a chisel. I am a carpenter of my own soul.” Barks’s translations, in particular, are shared widely on the Internet; they are also the ones that line American bookstore shelves and are recited at weddings. Rumi is often described as the best-selling poet in the United States. He is typically referred to as a mystic, a saint, a Sufi, an enlightened man. Curiously, however, although he was a lifelong scholar of the Koran and Islam, he is less frequently described as a Muslim.

The words that Martin featured on his album come from Rumi’s “Masnavi,” a six-book epic poem that he wrote toward the end of his life. Its fifty thousand lines are mostly in Persian, but they are riddled with Arabic excerpts from Muslim scripture; the book frequently alludes to Koranic anecdotes that offer moral lessons. (The work, which some scholars consider unfinished, has been nicknamed the Persian Koran.) Fatemeh Keshavarz, a professor of Persian studies at the University of Maryland, told me that Rumi probably had the Koran memorized, given how often he drew from it in his poetry. Rumi himself described the “Masnavi” as “the roots of the roots of the roots of religion”—meaning Islam—“and the explainer of the Koran.” And yet little trace of the religion exists in the translations that sell so well in the United States. “The Rumi that people love is very beautiful in English, and the price you pay is to cut the culture and religion,” Jawid Mojaddedi, a scholar of early Sufism at Rutgers, told me recently.

Rumi was born in the early thirteenth century, in what is now Afghanistan. He later settled in Konya, in present-day Turkey, with his family. His father was a preacher and religious scholar, and he introduced Rumi to Sufism. Rumi continued his theological education in Syria, where he studied the more traditional legal codes of Sunni Islam, and later returned to Konya as a seminary teacher. It was there that he met an elder traveller, Shams-i-Tabriz, who became his mentor. The nature of the intimate friendship between the two is much debated, but Shams, everyone agrees, had a lasting influence on Rumi’s religious practice and his poetry. In a new biography of Rumi, “Rumi’s Secret,” Brad Gooch describes how Shams pushed Rumi to question his scriptural education, debating Koranic passages with him and emphasizing the idea of devotion as finding oneness with God. Rumi would come to blend the intuitive love for God that he found in Sufism with the legal codes of Sunni Islam and the mystical thought he learned from Shams.

This unusual tapestry of influences set Rumi apart from many of his contemporaries, Keshavarz told me. Still, Rumi built a large following in cosmopolitan Konya, incorporating Sufis, Muslim literalists and theologians, Christians, and Jews, as well as the local Sunni Seljuk rulers. In “Rumi’s Secret,” Gooch helpfully chronicles the political events and religious education that influenced Rumi. “Rumi was born into a religious family and followed the proscribed rules of daily prayer and fasting throughout his entire life,” Gooch writes. Even in Gooch’s book, though, there is a tension between these facts and the desire to conclude that Rumi, in some sense, transcended his background—that, as Gooch puts it, he “made claims for a ‘religion of love’ that went beyond all organized faiths.” What can get lost in such readings is the extent to which Rumi’s Muslim teaching shaped even those ideas. As Mojadeddi notes, the Koran acknowledges Christians and Jews as “people of the book,” offering a starting point toward universalism. “The universality that many revere in Rumi today comes from his Muslim context.”

The erasure of Islam from Rumi’s poetry started long before Coldplay got involved. Omid Safi, a professor of Middle Eastern and Islamic studies at Duke University, says that it was in the Victorian period that readers in the West began to uncouple mystical poetry from its Islamic roots. Translators and theologians of the time could not reconcile their ideas about a “desert religion,” with its unusual moral and legal codes, and the work of poets like Rumi and Hafez. The explanation they settled on, Safi told me, was “that these people are mystical not because of Islam but in spite of it.” This was a time when Muslims were singled out for legal discrimination—a law from 1790 curtailed the number of Muslims who could come into the United States, and a century later the U.S. Supreme Court described the “intense hostility of the people of Moslem faith to all other sects, and particularly to Christians.” In 1898, in the introduction to his translation of the “Masnavi,” Sir James Redhouse wrote, “The Masnavi addresses those who leave the world, try to know and be with God, efface their selves and devote themselves to spiritual contemplation.” For those in the West, Rumi and Islam were separated.

In the twentieth century, a succession of prominent translators—among them R. A. Nicholson, A. J. Arberry, and Annemarie Schimmel—strengthened Rumi’s presence in the English-language canon. But it’s Barks who vastly expanded Rumi’s readership. He is not a translator so much as an interpreter: he does not read or write Persian. Instead, he transforms nineteenth-century translations into American verse.

It’s verse of a very particular kind. Barks was born in 1937 and grew up in Chattanooga, Tennessee. He received his Ph.D. in English literature and published his first book of poetry, “The Juice,” in 1971. The first time he heard of Rumi was later that decade, when another poet, Robert Bly, handed him a copy of translations by Arberry and told him that they had to be “released from their cages”—that is, put into American free verse. (Bly, who has published poetry in The New Yorker for more than thirty years—and whose book “Iron John: A Book About Men,” from 1990, greatly informed the modern men’s movement—later translated some of Rumi’s poems himself.) Barks had never studied Islamic literature. But soon afterward, he told me recently, over the phone from his home in Georgia, he had a dream. In the dream, he was sleeping on a cliff near a river. A stranger appeared in a circle of light and said, “I love you.” Barks had not seen this man before, but he met him the following year, at a Sufi order near Philadelphia. The man was the order’s leader. Barks began spending his afternoons studying and rephrasing the Victorian translations that Bly had given him. Since then, he has published more than a dozen Rumi books.