In the Middle East, a region benighted with seemingly permanent conflicts, increasing censorship and democratic rebellion, an Upside can seem unlikely. Yet, this week our reporters have been finding human stories that help change the perception of the region, giving a voice to its inhabitants and revealing their hopes and wishes.

Roger Hamilton-Martin wrote about the Israeli-Canadian Cory Gil-Shuster and his YouTube channel Ask an Israeli/Ask a Palestinian. Gil-Shuster poses questions to Israeli and Palestinian residents, exposing the nature of the conflict and some of their inherent similarities in the process. His unedited videos have racked up over 44m views since he began the project in 2012. “As a person involved in this conflict, I’m trying to figure out where perception meets reality,” he says.

There have also been uplifting images of the Syrian capital of Damascus returning to a semblance of normality after the end of a five-year siege staged by Assad’s forces. Bars have reopened and face-painted children ride on swings at a local fair. 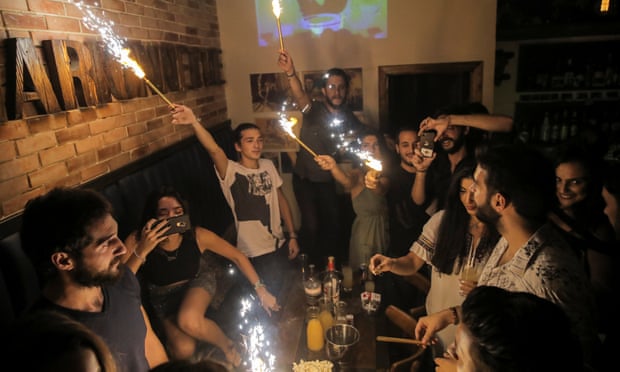 A celebration in Damascus, Syria, marks a return to normality after four years of fighting. Photograph: Marko Đurica/Reuters

Staying in Palestine, Monica Pelliccia has tracked down the only violin maker in the region, Shehada Shalalda. Shalalda’s passion provided a source of hope growing up in a war zone. His studies took him to Florence and the UK and he now has his own workshop in a local school where he makes violins for people around the world.

"This is a way to show that my homeland is producing beautiful handicrafts. Palestine is known only for conflict, but we also have a strong cultural tradition,”  says Shehada Shalalda.

Closer to home, our reporter Sandra Laville reported how local volunteers have been cleaning up plastic from beaches over the past decade on the Isle of Man. The area is recognised by the United Nations for its commitment to preserving coastal biodiversity. With only 13% of the world’s oceans remaining untouched by humans, it’s an example we could all follow.