The territorial defeat of the so-called Caliphate marks an important victory over the Islamic State but as numerous articles by terrorism researchers highlight, this does not signal the end of the ISIS; an organization that is able to conduct smaller-scale operations in Syria and Iraq, remain active through its branches located in Africa/Asia, and maintain an online presence where official (and unofficial) ISIS media outlets continue to churn out propaganda even since the fall of Baghouz, Syria – an area that was once ISIS’ last territorial enclave.

Another pressing issue remains: The number of individuals, male and female, detained in camps for being ISIS members or having connections with the group continues to grow daily. An insightful long-read New Yorker article “Iraq’s Post ISIS Campaign of Revenge” by Ben Taub explains how overflowing camps may result in some serious consequences down the road; a situation that shares some parallels with the Camp Bucca fiasco during the Iraq War:

“In some camps, humanitarian workers offer aid in exchange for sex. Many women are pregnant from having been raped by the security forces or from having sex to feed themselves and their children.

Although the fighting has ended, “these camps are meant to stay,” the N.G.O. director said. “If you are ten years old now, and you have no food, no assistance, and your mother has to prostitute herself to survive, and the whole of Iraqi society blames you because you were close to isis—in two, three, four years, what are you going to do? It’s clear. The seeds for the next conflict are all here.” 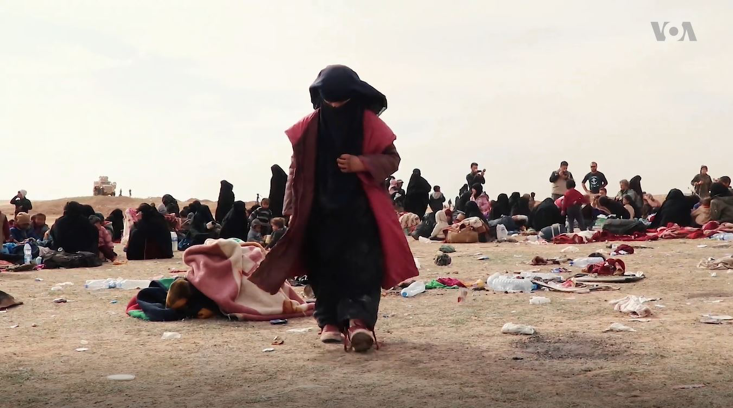 The populations of these camps will only continue to grow. A Syrian Democratic Forces official estimated that 500 individuals had surrendered as the battle of Baghouz drew to a close and NPR reporter, Ruth Sherlock, reported that “More than 60,000 people have poured out of this area in the past two months. Most of them have been ISIS fighters, supporters, and their children, but there have also been ISIS victims – Yazidi children and women who were taken by the group from Iraq and used as slaves.”

A portion of this population had travelled to Syria from other countries and the collective international community is faced with the question of what should be done with these foreign ISIS members. Iraq alone will take back an estimated 20,000 people from Syria, many of whom were a part of ISIS according to an Iraqi intelligence official. The SDF is holding 1,000 foreign fighters  and a recent report from The Guardian estimated that 20,000 foreigners have been detained in north eastern Syria with around 1,000 being suspected foreign fighters. Judicial systems in Iraq may not be equipped to handle such a voluminous case load and reports indicate that some courts are resorting to speedy ten-minute-or-less trials before handing out verdicts.

Foreign ISIS members are also subject to local terrorism laws: fourteen French nationals, accused of supporting or fighting for ISIS, will face trial. The hundreds of foreign fighters and their families being held in SDF camps and Iraqi prisons pose an international security concern much in part to unstable conditions and a strain on local legal systems. Additionally, if foreign ISIS members manage to escape, which has happened on numerous occasions, it is possible that they would be able to disappear off of the radar.

Some solutions have been proposed. In return for monetary compensation, Iraq has indicated that they will both try and sentence foreigners suspected of having ties to ISIS at a rate of “$2 million per suspect per year.” Meanwhile, Syrian Kurdish forces have suggested an international tribunal try these ISIS members.

There is no uniformed manner in how various countries handle cases of their citizens who have joined the Islamic State but debates over whether countries should or should not repatriate their citizens continue. Those who oppose repatriation argue that European court systems may not have enough evidence to guarantee a lengthy sentence. Unlike the United States, which has a robust set of foreign terrorism laws that make it easier to convict and impose lengthier sentences on these individuals, other countries may lack the means to prosecute returnees. These valid concerns account for why some countries are either refusing the repatriation option or stepping around this topic all together. However, it is important to keep in mind that Syrians and Iraqis have had to deal with the brunt of ISIS’ brutality and other countries, whether in Europe, Asia, or Africa, have a responsibility to prosecute and try their own citizens.

While numerous male ISIS members have returned to their countries of origin without much media attention, Shamima Begum’s case stood out much in part because she is a woman. When news broke that England would not repatriate her, larger national and international conversations focused on questions of complicity, individual agency, gender, and race in connection to her specific case. Some articles chose to describe Begum and other women who had joined the Islamic State as “ISIS brides” and “ISIS wives” but terrorism analysts/researchers and reporters covering the terrorism beat quickly pointed out the inherently problematic nature with these kinds of descriptions. In fact, it was discovered that Shamima was much more heavily involved than she stated in her interviews: She was a member of the Hisbah, ISIS’ morality police who were known for their harshness and mistreatment of local populations. Jessica Davis, security consultant and author of “Women in Modern Terrorism: From Liberation Wars to Global Jihad and the Islamic State” created a table to help those covering female ISIS members avoid such pitfalls: 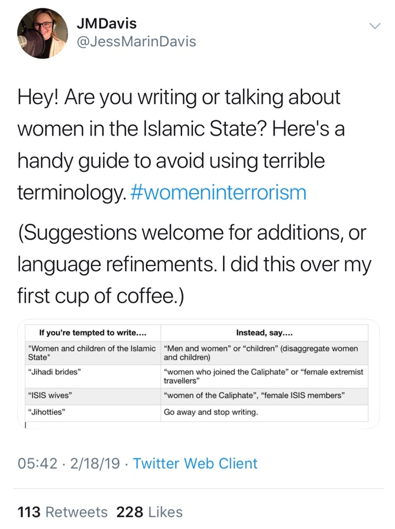 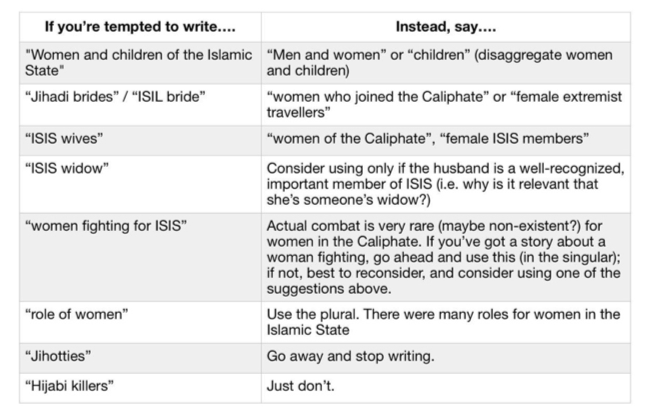 Shamima Begum, Hoda Muthana, and many other women left their respective countries at a time when ISIS had become well-known for its atrocities meaning that it seems unlikely that they would have been unaware of the brutal nature of this group. Although this does not absolve foreign female ISIS members of their crimes or the fact that their mere presence contributed to prolonging ISIS’ existence, it is worth noting that recruiters would often tailor their propaganda depending on the audience they sought to reach. For women, that often took the form of presenting a utopic image of the so-called Caliphate where their duty was to marry and create future generations to carry on the cause.

Numerous women who have either returned to their home countries or been captured discuss in their interviews how the harshness of life under the Islamic State was a wake-up call which led to their eventual disillusionment with the group despite initial attraction to the supposed ISIS utopia. Although skepticism concerning the genuineness of such statements is logical, particularly for those who stayed until the bitter end, these negative first-hand accounts do directly counter ISIS propaganda and these accounts have been used as a counter messaging technique to dissuade others from following in their footsteps.

The question over the varying degrees of victimhood that may be claimed by adolescent individuals who joined ISIS is complex and may be uncomfortable, but necessary, to think about. A number of men and women made the decision to leave for Syria at a rather young impressionable age and this is a fact that must be taken into account. However, this does not suggest that they should receive a free pass for their wrongdoings or that being under the legal adult age at the time of their departure means that they are not responsible for their actions.

The true victims of ISIS’ brutality are undoubtedly religious minorities (Shia, Yazidi, Christian just to name several), Syrians and Iraqis (many of whom were Sunni) who had no choice but to wait out the storm, victims of ISIS terrorist attacks, and children who were either brought to the so-called Caliphate by their parents or were born to ISIS parents inside of Islamic State territory. Understandably, the discussions concerning ISIS have largely centered on ISIS members themselves, the group’s ideology, and possible predictions that attempt to answer the question “What happens next?” However there remains a general, but not complete, lack of focus on victims’ voices. There is undoubtedly a long road to recovery for communities who have been torn apart by war and as was with former conflicts like the Bosnian War and Rwandan Genocide, providing the space for people to mourn, seek justice, and reconnect with one another is crucial. 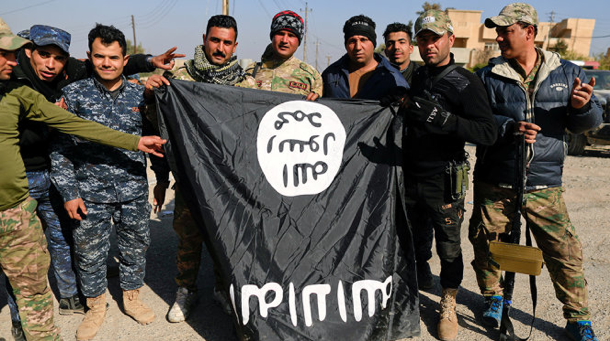 Some books about the Islamic State

Meili Criezis graduated from Southwestern University in 2017 with a dual History and French major focused on Algeria/France and conducted archival research on the Algerian Revolution for Independence in Paris. She is currently an analyst at the Office of Public Safety and Homeland Security researching terrorism, terrorist propaganda, domestic/international violent extremism across ideologies, and community resiliency initiatives.