By Will TG Miller 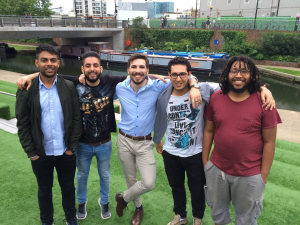 Will TG Miller is a final-year student at Cambridge University. He writes social commentary, on religion, politics, and culture. Follow him at Facebook.com/democide

I’m flying through the air at around 600 miles an hour, around 35,000 feet above the ground, when suddenly, the plane starts to shake. I’m in a cramped window seat, cornered by two large men to my left, while on my right, I have a few inches of metal separating me from miles and miles of... nothing.

The influx of wind hitting the plane jolts me, and despite my best attempts to adjust to the incoming turbulence, I am unable to prevent myself from being rocked. I hit my head on a jutting fixture by the window once or twice, wincing in pain. The seat belt sign comes to life with a high-pitched buzz that resounds across the aircraft; the voice of the air hostess crackles to life across the cabin radio.

“We’ve just encountered a brief spot of turbulence, it should be over shortly”

I hastily fasten the seat belt below me just as the air hostess begins to speak. I try to relax, but I find that I can’t; I’m tossing and turning in my chair like a patient in a hospital bed. The palms of my hands - one gripping my water bottle tightly, the other holding on to my armrest – grow sweaty. I close my eyes and try to relax, but I can’t.

I have always been very afraid of flying. It probably has something to do with me being from New York City and the large number of aircraft crashes I’ve seen happen on the news over the years. I know that everything will probably be fine, but the fear is gripping – it doesn’t let go. The fear is all-consuming; it devours me. Another gust of wind hits the plane, and I am rattled like a rag doll being shaken by a petulant child.

The man next to me is beginning to shift in his seat now. I’m sure that he has heard me. But I don’t stop; I can’t. It’s the only thing that makes me feel even slightly reassured. Eventually, the skies begin to calm, and the turbulence gradually fades away. Yet I am still clinging to my seat for up to an hour afterwards, drenched with sweat, silently doing dhikr.

I finally left Islam a little over a year ago, and although I’ve been to masjid a few times since, I haven’t properly prayed or observed any of the holidays (other than to use them as an excuse to get together with friends). Despite swearing to live by rationality and not superstition, I have been unable to let go of this aspect of my being, or move on from it.

It manifests itself when I get surprised or cry out in pain; when I achieve something after great physical exertion like setting new records in the gym, or during times of great duress. The words slip out from my lips as if called; hamdillah, mashallah, bismillah. When telling stories over drinks with friends, I sometimes add in a wallah for emphasis, totally outside of my own volition.

In Islam, this is considered nifaaq, or hypocrisy. I remember hearing during sermons about the slippery and treacherous munaafiqeen; how they would live without god, but call on god for help only when they themselves needed it.

For many people, the act of apostatizing necessarily entails anger because it is accompanied by the feeling that one has been lied to; that one has been betrayed. Many of these people will naturally thus come to hold a resentment against their former faith, endeavoring to avoid its expressions whenever possible.

So too did I. When I first began higher education as a young university student, I adopted a new accent that was distinct from the akhi dialect I had always used growing up in London. I tried to separate myself from the past in all ways. When asked about my religious beliefs, I would never say ‘Muslim’ or even ‘Ex-Muslim’ -I would always be an atheist, or a deist, or something of the kind.

But primal fear overwhelms all pretensions, just as it does expressions of self-imposed identity. My adopted ‘Americanness’ means little in the context of a tin can that, for all I know, is about to hurtle 35,000 feet down into the ground at over 600 miles per hour.

Perhaps the solution in all of this is not to attempt to fight against any of the identities of the self; perhaps instead, we should opt to embrace them. Maybe the next time somebody asks me about my religious identity, I will consider answering them accurately. Maybe I will turn to them and smile, saying: I am not a Muslim, or an atheist, but something in between. I am your munaafiq- it’s nice to meet you.