The date is March 24, 2018. Addis Ababa is in its second state of emergency. The new and current prime minister of Ethiopia, Abiy Ahmed Ali, will be appointed nine days from now, though nobody now knows who will be appointed or the day the appointment will occur.

During this same spring, a group of German, US, and Ethiopian musicians, poets, artists, and curators met in Addis Ababa for the fifth edition of Poetry-Jazz. Poetry-jazz has become a form of art practised by different groups in Addis Ababa. For the last five years, our semi-rotating group of artists, Poetry-Jazz, has been supported by the TURN Fund of the German Federal Cultural Foundation. These gatherings materialize as public performances, platforms, and publications reflecting the artists’ role as political ambassadors. We are meeting for the fifth time in six years in a kind of creative hopscotch, travelling between Berlin and Addis Ababa. Together, we instigate a semi-ancient form of Ethiopian poetry called Wax and Gold. This time we all agree that the gold, usually hidden in the wax, is to be on the outside of what we make together. We want all gold, heavy things, heaviness itself, something solid that melts, like some heavy metals, at the temperature of the hand.

We want all gold, heavy things, heaviness itself, something solid that melts, like some heavy metals, at the temperature of the hand.

We seek the gold through a form known as poetry-jazz, which combines music and poetry. Songs in Ethiopia are stories, physical spaces where history is continually approached, negotiated, tuned, and returned to. If poetry resists the intelligence almost successfully, as Wallace Stevens says, then in poetry-jazz rehearsals, we seek the almost more than the absolutely there, the almost more than the already there waiting-for-you-to-arrive. And when the poets don’t know where to go next, the musicians go there. 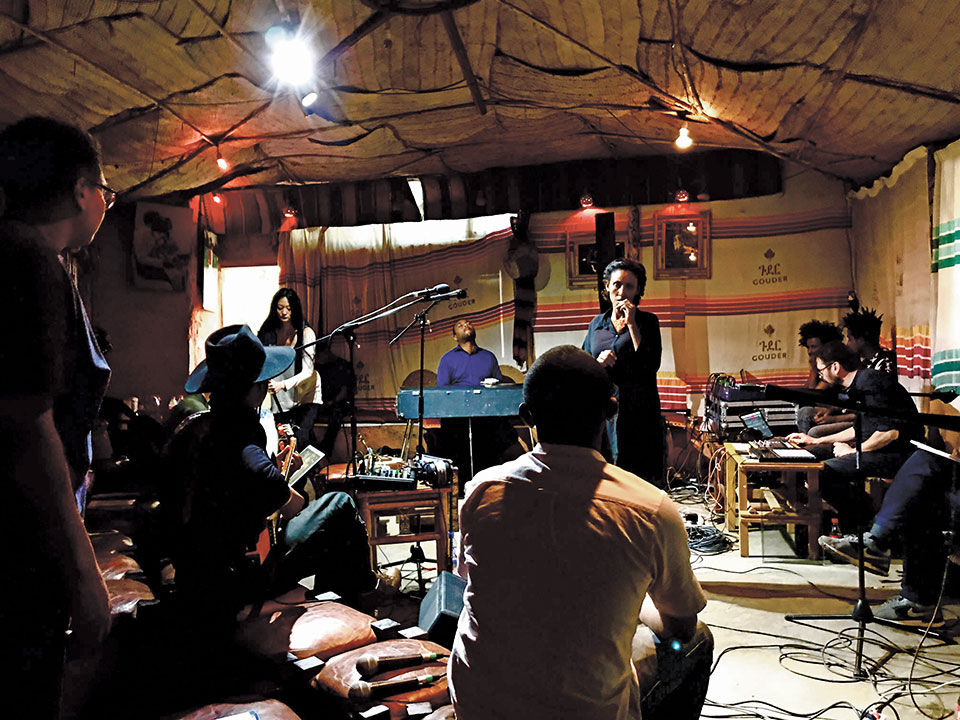 THE REHEARSAL SPACE for Poetry-Jazz’s fifth edition is a living compound called Fendika Cultural Center. The front entrance blends chameleon-like into the street-side lattice of small-scale, individually owned storefronts whose wares range from electronic parts to a single Band-Aid to diagonally stacked tables of tomatoes and limes. The inner courtyard is lined with benches, couches, tables, oil-drums for evening fires, a water pump for daily laundry, two water closets, two hand-dug latrines without any porcelain in site. At the end of the courtyard is an art gallery with three interconnected rooms. Blank scented smoke lazily issues from the centre room. The gallery hosts internationally exhibiting contemporary Ethiopian artists, regulars in Addis Ababa’s Museum of Modern Art. The week we are rehearsing, there is an exhibition that takes the form of a 1,008-hour coffee ceremony, by Robel Temesgen, a sometimes poetry-jazz co-instigator of sound things. It’s like our senses are surroundings surrounded; the visual and smelly art around us, we feel visual and olfactory surrounded by things that corresponded to the auditory space we care about and attempt to put into sounds leaning toward words.

The rehearsal space itself is a series of one-story mudstone-brick-timber-sheet metal enclosures, a thick, living urban carpet, an organic Mat Urbanism that holds up under covered corrugated metal roofs that connect and carve into multiple smaller spaces, inner courtyards, smaller scale public footpaths. It is an urbanism of forms leaning into one another, load-bearing connections that hold themselves up. A wall wraps around the living compound, a bricolage sheath replete with gates (and probably Gates somehow). Over time, holes and doors are carved between connected but closed things, like the musicians’ notes in poetry-jazz. Like most older fabric of Addis Ababa, this living compound is being elbowed out by new developments, whose “clearances” and “renewals” and “modernizations” are no different than the housing displacements in US cities from New York to St. Louis: they all also rely on currencies of spoken and legal language, words like “slum” and “derelict,” “blighted” and “ghetto.” All urban change relies on carefully chosen words.

Over time, holes and doors are carved between connected but closed things, like the musicians’ notes in poetry-jazz.

For three years, the entrepreneur who started this establishment lived under the table where the bar now stands. His parents came over as Sudanese refugees last century. He left the streets to live under the table as a young teenager. Over the seven years that followed, he acquired geographic responsibility and some kind of ownership of the space, which has been designed as a living-working space for a community of young adults without option or apparent means, the chance to live, learn a skill—instrument-making, how to play, how to dance—while simultaneously learning how to live and manage a self-determining, urban alternative community.

Between rehearsals, Melaku Belay rattles off a few names that have played in Fendika’s inner sanctum, Ethiopian legends in the jazz scene, and I stand there nodding in a way that tries to convey familiarity, wondering if any of the names I recognize are names he intends for me to recognize. Being from Kentucky, I have a background in glossolalia and beer cheese, grew up amid apocalypse lips. The only way Mulake can even begin to communicate to a Farangi, an outsider, from Kentucky, the cultural significance of the Ethiopian legends that have played in his space since it’s opened, is to tell me the story of how one day Flea, of the Red Hot Chili Peppers, called him up and said, “Hey, this is Flea, of the Red Hot. I just flew into Ethiopia and heard this is the place where someone like me can drop in and play with whoever is playing without needing to be announced.” Then Flea played there, just another Farangi outsider in the cortical steam of outsiders who get to enter into the inclusive sanctum of Ethiopian jazz.

POETRY-JAZZ MEMBER ROBERT LIPPOK grew up on the east side of the Berlin wall before the Berlin wall came down. Last century Robert’s mom walked into a GDR ministry and asked officials what her son was going to be. After some tests, it was concluded that Robert couldn’t be anything. Please, my son must be something, he must have a skill, a craft, he must work, be trained. So, geographically simultaneous in time to the formation of the German band Kraftwerk and the birth of electronic music, Robert found himself a shoe cobbler, rehearsing music with friends on homemade instruments and drawing unwelcome attention to himself from the East German government for his sounds.

As I sit here in Addis Ababa, in the backyard of our rehearsal space, thinking about our walls and firewalls presently going up the US, Robert tells stories about growing up in a time when music and writers and other HamletMachines directly impacted the politics and mounting fervour of the more radical imaginations. Like Ethiopians, Robert knows sounds can be sand grains in the state machine. Recall how, as Ryszard Kapuściński relates in the book The Emperor, the Ethiopian revolution that ended a forty-four-year reign of Haile Selassie, triggering a state ideological shift, started in an art exhibition in the fashion department at the University of Addis Ababa. And we are being watched. Mercy’s been warned.

I enjoy calling out for Mercy across the compound. Mercy is the Ethiopian jazz-poet and artist Mihret Kebede. Mercy write-sings about the everyday-sacred things, the sharing basket (the Lematis), the shared plate (the Safed), the small injera made for only one person (the Engocha). Like the German jazz-poet-musician Rike Scheffler, who writes water, Mercy writes silence itself rather than about silence.

It is in the space where language fails that poetry breaks in. It is in the spoken word, in the rehearsing, where guts gain feet, where words can fail well.