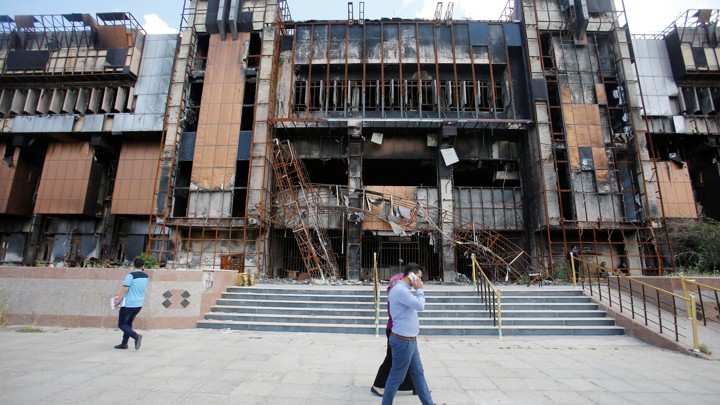 MOSUL, Iraq—Rayyan Hadidi was 18 years old when he lost his faith. It was July 2006, and he was on his way to school when he stumbled upon a cheering crowd that had gathered near a local mosque. The group, made up mostly of mosque leaders and worshippers, had encircled two men accused of volunteering with the Iraqi police force, which many saw as a puppet of the American occupiers. Al-Qaeda gunmen brandished their arms, preparing to execute the men, as the crowd shouted, “Allahu akbar.” Hadidi stared at the two men, flinching when he made eye contact with one of them just before they were both shot.

“I couldn’t forget this, ever. The way they were looking, the ones who were dying,” Hadidi told me when we met this spring in a café across the street from the University of Mosul. Like many Arabs in Mosul, he grew up as a conservative Sunni who fasted and prayed regularly. Islam was as much an inherited cultural identity as it was a blueprint for dreamed-of justice and a better life under God’s laws, an escape from the authoritarianism of Saddam Hussein and the chaos of post-invasion Iraq. His family, like most others in Mosul, accepted the word of the Quran without question.

But the execution haunted Hadidi. He began reading philosophy, history, and writing that was critical of Islam—dangerous stuff that he shared with his conservative family, who eventually cut off communication with him. Repelled by the extremism he’d witnessed, Hadidi told me that he began working with the American forces, which led to threats on his life from militants. He fled to Turkey in 2011, where he took to social media to write about the shortcomings of political Islam.

In 2017, after the liberation of Mosul, Hadidi finally returned to Iraq. Much to his surprise, he found it was now safe to air his personal feelings about Islam aloud. “I read about Muhammad’s life in a non-holy way. I found out that he’s one of the worst people ever in the world,” Hadidi said, unconcerned that someone might overhear his hyperbolic assessments. He was disturbed by stories like those in the Bukhari hadith, a collection of narratives about Muhammad, that recounted the massacre of a Jewish tribe, as well as Muhammad’s marriage to a 17-year-old slave after killing her father and husband. “How does a woman sleep with a man who killed her family? Muslims know this story and justify it by saying this girl would be proud that the prophet would marry her,” Hadidi argued. Many of the religious stories that Hadidi couldn’t stomach were tales of Holy War and ethnic cleansing. “Before isis, I never talked about this. I couldn’t criticize anything. ... We are speaking with no red lines now.”

Hadidi may be an extreme case, but he isn’t alone in his turn against religion. Today, nearly one year after Mosul’s liberation from isis, a growing group of young Iraqis like him are gathering in newly opened bookstores, cafes, and on Facebook, speaking freely about secularism, atheism, and their country’s need for nonsectarian institutions. While their influence is limited, their frustration with sectarian politics reflects a broader trend across Iraq, a country ravaged by 15 years of war and terror, where rotting corpses and unexploded mines still litter the apocalyptic debris from the desperate fight against isis. Unless these young people and other Iraqis weary of the sectarianism that divides their nation can translate their conversations into votes and reform Iraqi politics, the country may well fall back into the same cycle of religion-based politics that gave way to the rise of isis.

Khaldoun Saleh was 20 years old when isis took over Mosul in 2014. Like Hadidi, he grew up in a conservative Sunni family that stayed in Mosul after isisarrived, believing that just rule by God’s decrees, not man’s, had finally come. After a month, that fantasy had shattered. “I had trauma from religion,” Saleh said. He watched every execution video isis posted online—beheadings, burnings, and militants pushing men they believed to be homosexual off rooftops—and studied the scriptural references the group used to justify its actions. isis, he felt, was applying scripture far more literally than he or his family ever had. This presented him with what he saw as an irreconcilable dilemma: Either he should interpret the Quran just as isis seemed to do, or live as a hypocrite, ignoring much of what the Islamic texts said. Unable or unwilling to find a middle ground, Saleh renounced religion altogether.

Just how much influence these young secularists have is unclear. When I met with Saleh and Hadidi at Book Forum, a newly opened café, Hadidi directed me to a pair of Facebook groups with thousands of members, where Iraqis critique Quranic stories and the prophet’s sayings, and post memes mocking fundamentalism along with long threads lambasting political corruption and ineptitude.

While quantifying the movement’s influence may be difficult, the people of Mosul undoubtedly have more space to read, think, and question their faith than they’ve had in years. Near Book Forum, 37-year-old Hussam al-Din runs a bookstore that’s been open for only several months. His family once owned a bookshop in the Old City on Najafi Street. When al-Qaeda gained power in Mosul after 2003, they had to hide all their secular titles. They mostly sold fundamentalist Sunni texts, though al-Din always kept a few copies of books by Orwell and Marx to sell under the table. After isis took over, the shop was closed, and novels were proclaimed evil. When the battle against isis broke out in Mosul, Najafi Street was razed to the ground.

At al-Din’s new store, the most popular titles—particularly among younger readers—are works by Richard Dawkins and Stephen Hawking. He also carries works by Nietzsche, Rousseau, Foucault, and other Western philosophers that had largely been outlawed for years, he said. “In the past … terrorists were in control. There were limits and red lines. We knew what we were forbidden to think,” he said. “Now, everyone in Mosul is looking for something new.”

But this wave of Facebook secularism has yet to catch up with Iraqi politics. The week before Iraq’s first post-isis elections in May, campaign banners in Mosul featured explicitly religious motifs, many of them using Shia imagery. As I spoke with Saleh and Hadidi in the café in Mosul, one of the militias was holding an election rally outside. Gun-toting youth zoomed down the streets on armed personnel carriers, waving guns and campaign banners. As the International Crisis Group wrote in a 2016 report, at the height of isis rule in Iraq, joining these groups was often the only way for youth to earn a living and to feel a sense of belonging and self-respect.

Secular movements often fail to offer these advantages. They’re also locked out of the party system imposed by the United States in 2003, which applied proportional representation to all of Iraq. This policy eventually spawned a spoils system in which ministers gave jobs almost exclusively to their own party supporters, many of whom were members of ethnic and religious communities. Today, virtually all political power and access to employment—both public and private—runs through Iraq’s sectarian parties.

“The biggest danger to Mosul is not isis or al-Qaeda, but the existence of religious parties’ militias,” Hadidi said. Many Iraqis—especially the youth—want state institutions, not sectarian militias, he added. They do not oppose religion itself, but the way that religious fealty undermines effective governance. Amid the devastated neighborhoods of West Mosul, shiny rebuilt mosques sit among otherwise-ignored ruins of people’s homes, Hadidi pointed out. “The government says, ‘Screw you,’ except for religion. Your life is nothing,” Hadidi said. “They use religion as a cover to play with the people.” Iraqis are increasingly disillusioned with this system. Half of the respondents in an opinion poll from last August said they wanted candidates running in the May elections who were “independent technocrats” or had a “civil or secular agenda.”