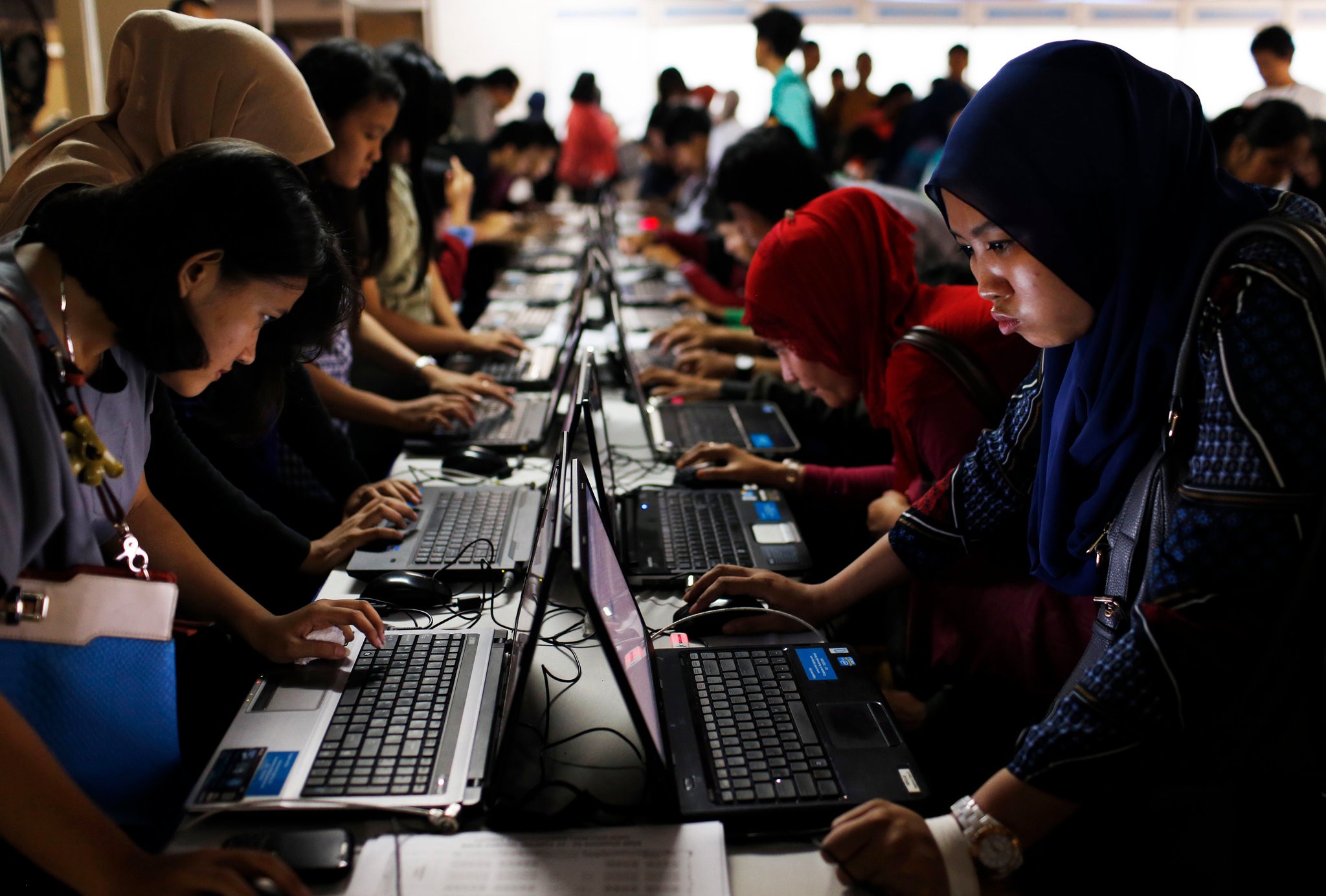 Early in her career, Samira Negm, a Cairo-based engineer, programmed self-parking features for cars. But she spent nearly as much time driving a car as she spent programming one. Millions of people moved from home to work every day in her city of more than 20 million; her daily commute to work could at times run to three hours or more.

She started wondering if she couldn’t do more useful things with her skills — and her time. Perhaps she could connect co-workers looking for efficient ways to travel to work in Cairo’s chaotic traffic. Perhaps she could even design a car-pooling app, to provide workers, particularly women, with safer and cheaper ways to travel while helping cut down traffic congestion. Ms. Negm quit her job and Raye7, a car-pooling app, was born.

Ms. Negm is the new face of tech entrepreneurship in the Muslim world. And she is not alone.

The number of women at work across the Muslim world is swelling. Across the 30 largest emerging-market Muslim countries, 100 million women were working in 2002. Today, that number is 155 million. Economic necessity, more education, new technologies and changing social norms have been at the core of this shift. And among these new entrants to the labor force, women like Ms. Negm — a new generation of educated, female, dynamic, tech-savvy, globally connected but locally committed entrepreneurs — hold the most promise for delivering an outsize impact on their countries’ prosperity.

Across most countries of the world, women make up a much smaller proportion than men of those skilled in coding and the sciences. In fact there are only five countries where among students enrolled in science, technology, engineering and mathematics, or STEM programs, women outnumber men. Two of those, Brunei and Kuwait, are Muslim-majority economies. Across 18 countries, women make up 40 percent or more of STEM students. More than half of the countries have Muslim majorities. (In the United States, women make up just 30 percent of STEM students.)

This intersection of STEM education and rising entrepreneurship has created the conditions for women in Muslim-majority emerging markets to catch the wave of technological change sweeping the world. But they have done so in a way that looks very different from the West — and very different from the generations of women before them. They are using technology to trump culture and then changing culture from within.

DoctHers, a Pakistani telemedicine company aimed at solving a unique cultural and economic issue, is a case in point. Women in Pakistan graduate from medical schools in the country in higher numbers and with better grades than men. But while having a medical degree adds prestige for women in the marriage market in Pakistan, using that degree as a practicing doctor usually does not. Many qualified female doctors therefore don’t practice medicine after marriage. Perhaps related, there is a massive shortage of doctors in the country, especially in rural areas.

This is where DoctHers comes in. The start-up was co-founded by Dr. Sara Khurram and modeled on a predicament she herself faced. It is a platform, providing initial retraining and skills for housewives with medical degrees and then an online connection to part-time telework through a video platform. On the other end are (primarily female) patients who live in remote parts of the country and who would otherwise receive little or no medical care at all. Such digital bazaars have sprung up across the Muslim world, offering technological solutions to cultural constraints and providing new forms of livelihood and services to women.

Often young female entrepreneurs are tapping into a market in which they have a comparative advantage: other young millennial women like them who have newfound disposable income.

Amira Azzouz is the Cairo-based founder of Fustany.com is a fashion and lifestyle portal for Arab women covering everything from health, beauty, nutrition and fashion to careers, relationships and children. Elissa Freiha, based in Dubai, is the co-founder of Womena, a platform for connecting high net worth women investors with entrepreneurs. Diajeng Lestari, in Jakarta, is the founder of Hijup.com, a pioneer in Islamic modest fashion e-commerce, which brings together products from 200 fashion designers and gets 1.5 million visitors each month.

For their grandmothers and mothers, work outside the home was often inaccessible. But the 50 million Muslim women who have joined the work force — online and offline — in the last 15 years have led the greatest migration from home to work ever seen in their countries. The economic opportunity unleashed by the combination of education, ambition and technology is massive. The combined income of working women across the Muslim world is already $1 trillion.

As more women create entrepreneurial ventures, generating jobs and income for ever-larger segments of the population, governments can facilitate this new avenue of growth for their economies. The social payoff, in the form of women’s empowerment, breaking stereotypes and stronger communities, may be even greater. And as digital platforms and tools make economic activity more easily visible and measurable, policymakers have an opportunity for smarter regulation.

Laws are often behind the economic realities of female (and male) citizens. While most emerging markets in the Muslim world have high internet and mobile penetration rates, women still tend to have less digital access than men. While public transport infrastructure in many Muslim emerging markets needs overall improvement, it also needs to take into account women’s concerns around safety and harassment to truly open up mobility options for them.