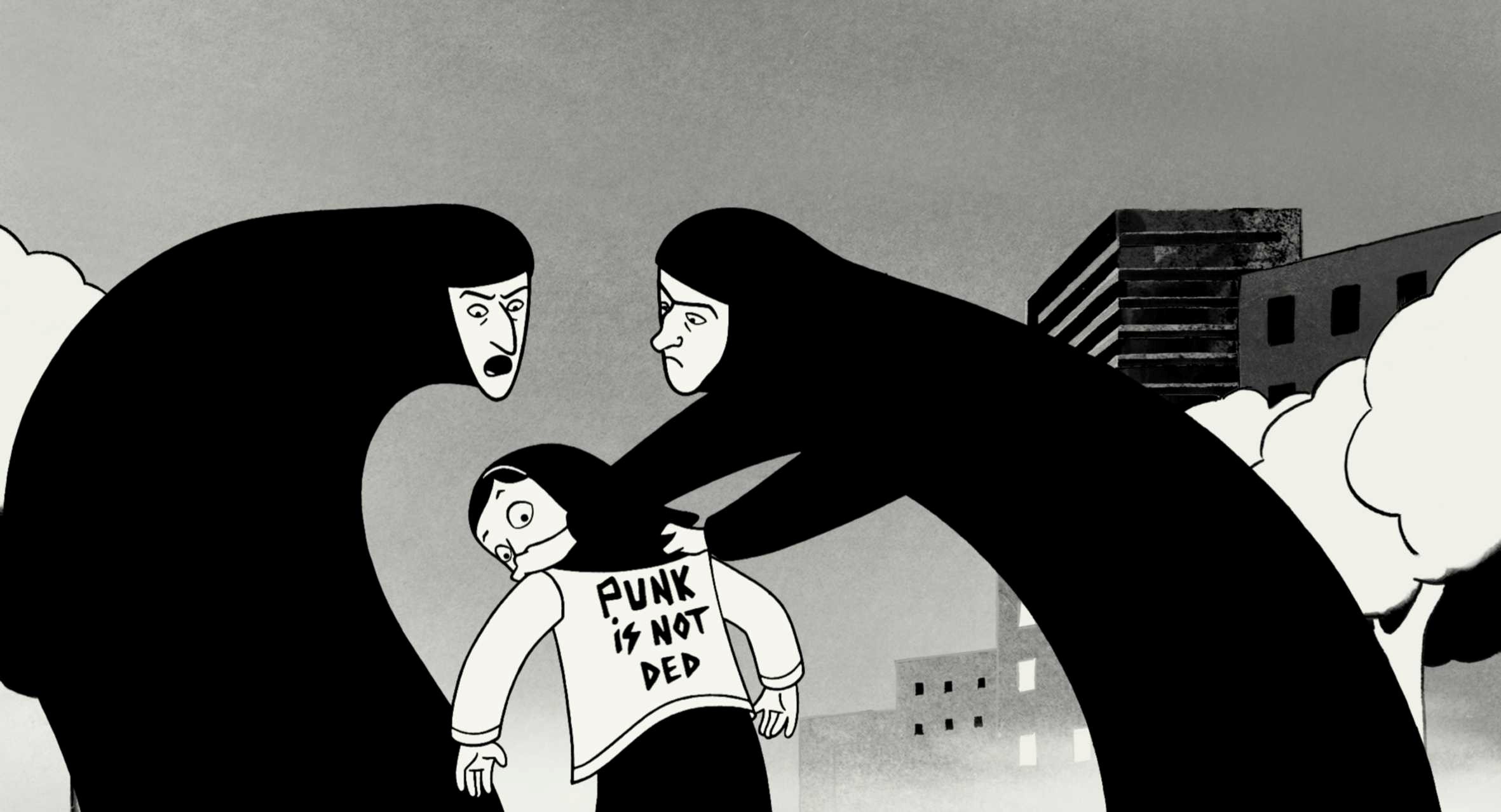 There is a scene in Marjane Satrapi’s autobiographical movie animation Persepolis (adapted from her comic book of the same name) whereby a young Satrapi gets stopped by the Iranian morality police. Her crime? It’s the Islamic Revolution and she is wearing a shirt that says ‘Punk is not ded.”

The scene is undoubtedly funny, but underlying it is the sad reality that for a lot of us Muslims, being policed for our behavior – whether it is by state-appointed authorities or family, friends and even strangers – is not uncommon. It happens in the house, in the streets, in universities, online – you name it.

There is even a song about it by Canadian-based hip hop duo Deen Squad called ‘Pray in peace’.

‘Heard you refuting me in public

Cuz I’m out of your league

Your views are too extreme

Nobody wants to hear you speak

That’s why these kids they leave

Allah is Ar-Rahman and Ar-Raheem

Is what we need to hear

I can’t even pray in peace

Tryna make it hard for me’.

It’s the kind of song that may resonate with a lot of us.

Journalist Omar Shahid wrote about the duo, saying: “Deen Squad … are fighting back against the Islamophobes, challenging every stereotype of what it is to be a Muslim today. They are speaking to a new generation of Muslims in a way that nobody has done, or dared to, before. They are loud, bold, confident and, dare I say, cocky.”

But in a case of irony, Shahid wrote further: “But are they going about this all in the right way? Are they actually leading Muslims astray and can their music be outright classified as haram, or is there more to it? To some, it seems obvious. Music is haram. Dancing is haram. Therefore what Deen Squad are doing, despite their lyrics being about the Islamic faith, is still haram.”

Hold on right there, brother!

While Shahid concluded by saying whether the music of Deen Squad is haram is up to debate and therefore should be the start of discussion (by the way, his article is titled ‘Deen Squad’s Music: Halal or Haram?’) it is obvious that whenever the more moderate of us Muslims are having fun, there comes the conservatives who try to snatch it away. Shahid becomes the haram police that the Deen Squad sings about.

Sara Ahmed, 25, a journalist in Egypt, said: “My whole life basically consists of being surrounded by the haram police. It's literally astounding. Everyone has such an opinion on everything. Haram to put on make-up during Ramadan, haram to wear a t-shirt for ladies older than 50, haram to put on perfume during Ramadan, haram to have pre-marital sex, haram to  drink alcohol, haram to being without the veil, haram to drugs. There is such a fascination with the whole 'it takes a whole village to raise a child mentality' that some Muslims take it as a personal life goal it seems.”

Some Muslims devise ingenious ways to respond to the haram police. Zaynab Salehpour, 24, a mechanical engineering student in Illinois, US,  recounted having to avoid online brickbats from a fellow Muslim who chastised her decision to split down household aspects – chores, money, duties – with her fiancé.

“They claimed that it was haram that I was replacing the man of the household, and that in Islam, women need a man of the house for “direction” and to “take the lead” or my children will suffer. I wrote back with a very long paragraph about Hazrat Khadijah and how she was the breadwinner and actual boss of Prophet Muhammad, years his senior, and proposed marriage to him. I asked them: “So you are saying that their household structure was haram? Are you saying that the children of the Prophet, such as Hazrat Zainab and Hazrat Fatima, suffered because of their mothers’ status? And then I blocked them,” Salehpour said

Housewife Fatima Ahmad, 47, from Morocco, said: “This is the problem with the haram police, they are only concerned with the little things like YouTube, hijab, music and growing beards.  Enjoining the good and forbidding evil means encouraging one another to feeding hungry people and to stop persecuting others and killing them for apostasy and blasphemy. How about the wars, - we are supposed to oppose these big sins! My mother would say, "They gag at a gnat, but swallow a fly".

Lily, 23, a student in the UK said: “I hate them! I swear they are everywhere especially social media. I piss them off by posting pro-choice/LGBTQA and feminist stuff.”

Nora, from India, has a funny way of deflecting comments about how she needs to cover up. She tells them: “It’s a good idea. I think I’ll wear a burqa too when I get old and fat.”

The problem of the haram police is that it pushes Muslims away from wanting to practice their religion.

Like Satrapi, Zahra Khan, who now lives in California, grew up surrounded by state-sanctioned moral police. She said: “I grew up in Saudi Arabia after moving there from Pakistan. I tried my best not to wear a headscarf in public. I would only put it on for 5 minutes if I saw the religious police and then I would remove it. I never thought about wearing it on my own. Then I moved to Canada and now that I was free to make my own decisions about what to wear, I decided to wear a headscarf.”

“The haram police makes you want to do the opposite of what they're trying to force you to do. What merit does a personal religious practice have if you're not doing it sincerely?”

Not that the problem escapes Khan when she is in the US where she now resides. “In the US, the haram police for me often consists of random aunties at the mosque berating me for how I'm dressed - even on Eid. And often without even saying salaam first. Their first words are: why are you wearing pants?” she said.

In my own country Malaysia where I reside, state-supported religious policing is increasing. Two institutions wield a lot of power: The Department of Islamic Development Malaysia (JAKIM) is an agency responsible for the Islamic affairs in the country, and the Selangor Islamic Religious Council (JAIS) has jurisdiction in the state of Selangor. Let’s take JAIS for example. For quite some time now, JAKIM has been rounding up Muslims in the country for things such as khalwat (close proximity between unmarried Muslim couples), drinking alcohol and not fasting during Ramadhan. These are personal freedoms that should not be touched.

I asked a few people what is the solution to this madness.

Es KS, a lawyer in Canada said: “The religious dogma of the people is a reflection of the government - in a free society there is freedom of thought. There are outside foreign forces likely influencing Malaysia”

Catalina Rembuyan, a Malaysian who teaches English literature in Singapore said: “I guess the best way is to compare notes with Jewish society. The reason why Christianity got out of its haram police phase was simply because the religious arguments became too violent and traumatic - basically the Reformation. To this day, we think of things like 'being burned at the stake' when someone says 'heresy' even though arguments about heresy happen all the time.”

“I'm not really keen on the idea of a similar traumatic event in Islamic history so maybe we can see how Jews avoid over-interference into personal lives,” she said.

Mas Shaari, a social media editor from Kuala Lumpur, Malaysia, 31 has this opinion to offer: “I think it is best we start with the religious leaders, scholars. They have to promote this idea first - their voice will be able to shape the community's perspective in this.”

Meanwhile, Shahi Esfelazi, 27, a sexual and reproductive health and rights (SRHR) advocate in Malaysia reminds Muslims that “There is no force in Islam. Allah loves all things beautiful.

He used Malaysia as an example and recounted a time when the country was more tolerant: “There was a time in Malaysia where we espoused the concept of having 'no force in Islam'. This even included the argument you cannot force someone to do something, like pray or fast or not commit any sins. It was a waste of time to do so - faith or iman must come from the intention or niat of doing it. One uses hikmah (wisdom) or wisdom rather than punishment. Nowadays the motto is it's better to force someone to do it, because it is better for them. I do not know whether this concept is from the Qur’an or Hadith.”

“We must return to the values of hikmah of how Allah prefers beauty over hatred, on how Islam means peace and dakwah is an invitation and not hardcore book-thumping evangelising. There is no need for the haram police if you keep inviting people to understand Islam and not force someone to do something that they do not comprehend and do not believe in,” Esfelazi said.