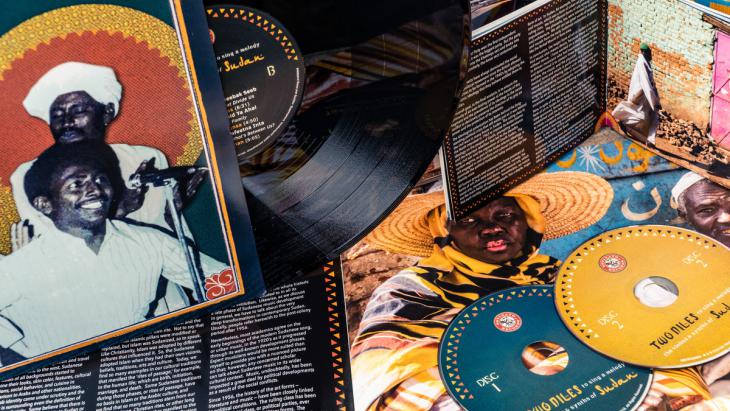 Ostinato Recordsʹ latest release, "Two Niles to Sing a Melody", is not only a collection of sixteen songs from the peak period of the country’s popular music era, the 1970s, it also contains fascinating first-hand accounts from a variety of musicians who survived the purges during the subsequent clampdown on popular culture.

The contemporary history of Sudan is as fraught and complicated as any other post-colonial African nation, if not more so for having had three colonial masters before independence: the Ottoman Empire, Egypt, and finally the British. This chaotic background has left a permanent mark on the social and cultural structure of the country and arguably caused the split into North and South Sudan. It also laid the groundwork for the country’s first coup in 1969 led by Colonel Gafaar Muhammad an-Nimeiry.

Charismatic and smart Nimeiry understood he had to win the hearts of his people to hold onto power. He actively encouraged the development of a popular music scene that would appeal to the masses. With the assistance of the Chinese and North Korean governments, theatres were built and musicians trained.

The music these new performers were creating didn’t just grow out of thin air. Sudan had a tradition of popular music dating back to the 1930s. However, the period under the rule of Nimeiry was when the music of the country flourished, especially in the new capital of Khartoum. According to accounts by people who lived there at the time, music was all-pervasive.

Unfortunately this period of cultural activity was short-lived. With the emergence of extremist militant groups in the Islamic world, Nimeiry began catering increasingly to their intolerant views. In the end even the introduction of legislation censoring music lyrics was not enough to keep him in power. He was overthrown in a coup in 1986 that ultimately resulted in Sudan’s current leader, Omar Al Bashir, coming to power in 1989.

Musicians had begun to leave the country during the early 80s when Nimeiry was trying to hold onto power by appeasing hard-line elements. However, it wasn’t until the early 1990s that the government began aggressively targeting music and musicians.

While restrictions during the 80s had been bad, limiting what they could sing about and where they could perform, the new laws were even more restrictive. Unless songs glorified the new regime or demonised the people of South Sudan, they were banned. Musicians were arrested and tortured for daring to step out of line and the trickle of exiles turned into a flood.

Listening to Two Niles to Sing A Melody released by Ostinato Records, youʹll find yourself transported back into Sudanʹs music heyday. Most of the 16 songs were taken from recordings originally made in the 1970s in Khartoum. Unfortunately even the best restoration programmes in the world can’t make up for deficiencies in recordings from fifty years ago. However, the occasional wince at a distorted voice doesn’t prevent us from appreciating the quality and diversity of the sound these amazing musicians produced.