Though her mother threatened to kill herself if she didn't marry at 13, Meghla managed to get out of it. Now, she helps to prevent other child marriages from happening. 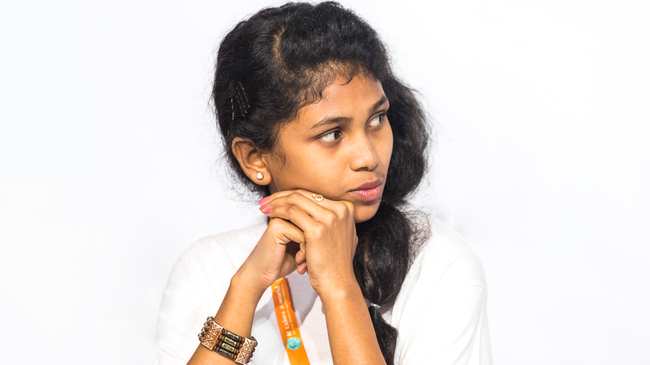 Meghla has two birth certificates, one of which almost ruined her life. Her real birth certificate says she just turned 18—but a corrupt Bangladeshi official issued her a fake birth certificate, which says she's 22 so that Meghla's family could marry her off when she was just 13 years old.

According to UNICEF, one in five Bangladeshi girls get married before they turn 15. In rural areas, 71 percent are married before the age of 18, compared to 54 percent in urban areas. And though the legal marriage age is 18 for women and 21 for men, a change in the law in 2017 made marriage at a younger age legal under "special circumstances," without specifying what those circumstances are.

Today, Meghla works with the aid organization World Vision to help girls get out of forced marriages. I recently spoke with the 18-year-old about her work, as she attended the EU Commission's European Development Days (EDD) conference in Brussels, where 8,000 people gathered across the development community to hear "innovative solutions to the world's most pressing challenges." Meghla was invited to the conference to speak about her experiences, and recount how she and World Vision have saved dozens of girls from forced marriages.

VICE: How did you find out that you were supposed to get married?
Meghla: My mother just told me the news one day, when I was 13. My husband-to-be was 30, and he was living abroad. I didn't know him and my mother didn't know him, either. I really didn't want to get married; I wanted to go to school. But my mom went ahead and arranged it without speaking to me. I tried to convince her to change her mind, but she wouldn't listen. My father had passed away, so I couldn't exactly turn to him.

Why do you think she did it?
My mother lives in Lebanon, while my brother and I lived with our aunt in Bangladesh. When I was 13, I found out about World Vision and started attending their meetings and workshops at their Children and Youth Forum. It was a place where we could speak about our problems and support one another. Through courses, I learned a lot about gender inequality, child marriage, and child labor. My family didn't like that I was going to the meetings alone, so my aunt told my mother that I needed a husband to look after me.

How did that make you feel?
I'd watched my sister, brother, and cousins get married off as children, just like my mother had been. Now they're all unhappy, wondering why they got married so young. One of my cousins was married at 14 and had four children, one of whom married young, and now my cousin is a grandmother at 28. I could see what my future held if I got married that young, and I didn't want it for myself. I wanted to live out my dreams and get an education.

How did you get out of it?
My mother threatened to kill herself when I told her that I didn't want to get married. I was so scared, I agreed to go ahead with it. On the day of the wedding, I had an exam at school. But after it was done, I didn't go home—I hid all day with a friend. When I eventually went home that evening, my uncle slapped me. My mother left and didn't speak to me for three months. I was banned from going to school. I have a huge family, and everyone was putting pressure on me to get married, but I stayed strong against all of them. My mother eventually realized that she was wrong and reached out to me again.

Why do you think parents do this to their children?
Often, families don't see the value in sending their kids to school because they don't believe they'll get a job at the end of it. In their thinking, the solution is to marry off the child, so it becomes somebody else's problem to take care of.

Since getting out of your own forced marriage, you've helped other girls do the same. How do you do that?
We have different approaches at the Children's Forum. We put on workshops where we invite young girls and their parents, and I share my experiences with them. We also work with local schools and the police, as well as influential people in the area to help spread awareness. Where I'm from in Bangladesh, 40 percent of girls are married before they turn 18. That's why this issue is so important to me.