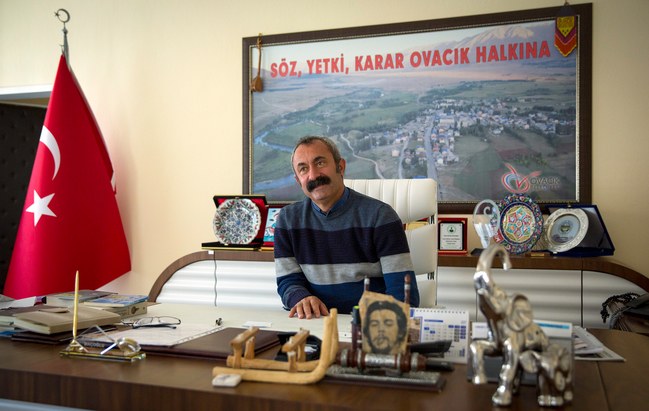 There’s something unusual in Ovacık, a village in a snow-capped valley in eastern Turkey where the Turkish Air Force regularly bombs Kurdish rebels. In the lobby of the town hall is a painting of Karl Marx, not of Turkey’s founder, Mustafa Kemal Atatürk, whose picture hangs in most other Turkish government offices. In early February, a piece of paper posted on the building’s outer wall itemized the town’s income, expenditures, and surplus budget, part of which goes to scholarships for university students. Displaying the itemized income each year is a practice that the local mayor, Fatih Mehmet Maçoğlu, began when he was elected, four years ago. Maçoğlu promised the village’s roughly thirty-one hundred residents transparency and accountability; publicly itemizing the local government’s income was one way to deliver it.

Soon after this year’s income was posted, a photo of the piece of paper was shared on Twitter—a source of news for many young Turks. Within weeks, the obscure village mayor became a grassroots symbol of good governance in Turkey. When President Recep Tayyip Erdoğan unexpectedly announced this week that Presidential elections would be held in two months, a full year earlier than planned, citizens took to Twitter and called for Maçoğlu to run. “Mr. Mayor, for God’s sake, become our presidential candidate now that the election date has been announced, save us,” one user wrote.

Maçoğlu, a forty-nine-year-old former health-care worker and longtime leftist activist, played down his sudden popularity. “It is important for a society to think out loud,” he told me over the phone this week. As for a Presidential run, Maçoğlu said that he plans to run for mayor, either in Ovacık or elsewhere, but was less direct regarding whom he would support for President. “Ovacık is prepared for these expedited elections, and we Ovacık citizens know who to support,” he said, without specifying a candidate.

Members of Erdoğan’s ruling Justice and Development Party, or A.K.P, which dominates Turkey, dismissed Maçoğlu. They said that the village mayor receives extra media attention because he’s a Communist in a capitalist country. Nihat Alcan, an A.K.P. government worker, said that A.K.P. mayors are just as effective and transparent as Maçoğlu. “What Maçoğlu is doing is good, but it’s nothing different. Our mayors are doing the same thing,” Alcan told me. “The media is exaggerating because of the Communism connection. I’m against Communism because it doesn’t give freedom to religious ideas.”

Some Turkish leftists dismiss Maçoğlu’s popularity, too. Ahmet Kerim Gültekin, an anthropologist and a former assistant professor at Munzur University, in nearby Tunceli, said that focus on one man fractures Turkey’s opposition and draws attention away from uniting against Erdoğan and his party.

Communists are a marginal group in Turkey—Maçoğlu remains the only mayor to win office under the Communist Party banner—and Maçoğlu’s election showed that the A.K.P. is willing to tolerate a Communist politician in its midst, because he’s not a threat. “It was harmless Communism,” Gültekin said.

More than fifty thousand people who were accused of terrorism in the wake of a failed 2016 coup against Erdoğan’s government are awaiting trial. Since then, the country has remained under a state of emergency that prohibits demonstrations, and extrajudicial arrests continue.

Maçoğlu says that he just wants his district to be economically self-sufficient. In 2017, the Ovacık municipality opened a coöperative, creating what Maçoğlu said were two hundred and fifty jobs in beekeeping, organic honey production, and chickpea and bean farming. Maçoğlu, who works in the fields alongside local farmers, plans to open an organic dairy farm next. Since taking office, he has also opened several libraries, made public transportation free, and reduced the cost of the water provided by the municipality. In big Turkish cities such as Istanbul, the village’s “Communist honey” has become trendy. Cumhur Orancı, a publishing editor in Istanbul, praised Maçoğlu and said that he devours honey and beans from Ovacık. “He’s transparent because he’s an honest guy,” Orancı told me, of Maçoğlu.

Ovacık is a holy site for Alevis, Turkey’s largest religious minority. Maçoğlu, like many people in the region, is Alevi by religion and of Zaza Kurd ethnicity. The Alevi community, which consists of both ethnic Kurds and Turks, staged one of the first uprisings against the nascent Turkish state, protesting the state’s attempt to consolidate power and its forced cultural assimilation campaign beginning in 1936. The Turkish military killed tens of thousands of Alevis, a massacre that Erdoğan apologized for on behalf of the Turkish government, in 2011.

In the nineteen-eighties, the Kurdistan Workers’ Party, or P.K.K., which has been declared a terrorist organization by the United States and the E.U., began building bases in the area’s remote mountains. Maçoğlu and most local leftists said in interviews that they do not support the guerillas. Still, the Turkish military has a strong presence in the area, in opposition to the P.K.K., and Ovacık’s residents live with curfews and checkpoints.

When I visited the village last fall, Maçoğlu told me in an interview that he is focussed on his immediate goals, including labor rights and animal breeding. The husband and father of two children seemed uncomfortable with questions that could easily land him in jail. He disagreed with government policies indirectly and politely. When asked about Turkey’s recent offensive against Kurds in Syria, Maçoğlu paused. “The right to live for all living things is sacred for us. I’m against violence,” he said.