To many non-Muslims, the existence of an Islamic community on the island of Sri Lanka may be surprising. Sri Lanka has been known for the past three decades as the scene of an atrocious civil war. Its Buddhist Sinhala majority, with 69.1 percent of the national population of 21.5 million, was challenged by Tamils – 7.1 percent, and mainly Hindu in religion, whom the secessionist Liberation Tigers of Tamil Eelam or “Tamil Tigers” aspired to represent. The “Tamil Tigers” were defeated militarily in 2009.

But Sri Lanka also counts 7.6 percent of its people as Muslims, and among them, as elsewhere throughout South Asia, the spiritual tradition of Sufism is vigorously present. After 1973, and the Arab oil embargo that enriched Saudi Arabia greatly, the ultra-fundamentalist Wahhabi sect, which is the official religious interpretation in the Saudi kingdom, began to penetrate Sri Lanka’s adherents to Islam. The Wahhabis in Sri Lanka act through a movement called Thawheed, or Monotheism. They opened numerous medresas. They despise Sufis. 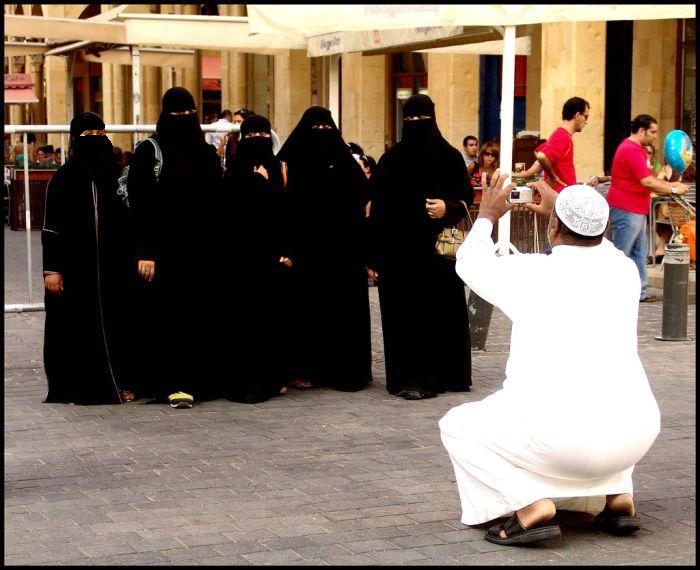 According to M.C.A. Hameed, president of the All Ceylon Thareekathul Mufliheen, a Sufi order whose name means “path of the fearless victorious,” Sri Lankan Muslims then began to find employment in Saudi Arabia, and many young Sri Lankan Muslims were awarded scholarships by Saudi universities. But “those who completed their studies returned to Sri Lanka and… propagat[ed] the ideology” of Wahhabism, Hameed says. Further, “to pursue their goal the Wahhabis resorted to violence and intimidation culminating in death and destruction. Our religious society… was not spared and had to face untold hardship.”

The All Ceylon Thareekathul Mufliheen was founded in the late 1980s by Sheihul Mufliheen M.S.M. Abdullah, known as “Rah,” in the southeastern Sri Lanka village of Maruthamunai. It was registered as a cultural society with the civil authorities in 1989. The headquarters of Thareekathul Mufliheen is now located in the small eastern coast village of Kattankudy, which has 42 mosques. The order maintains branches around the island, and claims 15,000 members.

Hameed states that the “vision” of Thareekathul Mufliheen is “to expound the true meaning of ‘kalimathuth thayiba,’ the ‘fragrant sacred words.'” These words are “la ilaha illallah,” the essence of Islam, meaning “there is nothing but God.” In the teachings of Thareekathul Mufliheen, “This word Allah (God) denotes a great power, unbound by time and space, infinite and beyond human imagination. The creation is only the manifestation of this eternal truth and [is] not separate from it.”

This principle underlies the doctrines of Thareekathul Mufliheen, but its founder denied exerting any compulsion anywhere to embrace his views, given that each human being is free to choose a path of faith. In 1980, Abdullah (Rah) published a book in Tamil titled Imanin Unmaiyai Nee Arivaya, or Do You Know the Truth of Iman? – iman referring to Islamic belief. The country’s official Council of Islamic Scholars, the All Ceylon Jamiathul Ulama, purportedly without reading the book or holding a hearing to examine it, published a fatwa or religious opinion on September 10, 1989, declaring Abdullah (Rah) and his followers as murtadd or apostates, who renounced Islam, in the judgment of the clerics.

Abdullah (Rah) filed a defamation suit against the All Ceylon Jamiathul Ulama in 1990 in Colombo, the Sri Lankan capital. Many hearings later, in 1996, the All Ceylon Jamiathul Ulama revoked the fatwa and settled the complaint. In a similar act of discrimination, members of Thareekathul Mufliheen were denied registration of marriages and burial of the dead in conformity with Islamic practice, but through legal action these rights were restored, at least on paper. A book by Abdullah (Rah) translated into English, The Court of Reason, was published in 2010.

Thareekathul Mufliheen opened a Meditation Centre at Kattankudy in 1996. On May 29 of that year, at 1 A.M. in the morning, Wahhabi arson struck the building. Abdullah (Rah) and the members of the order were targets of shooting and grenade attacks, and other physical aggression, as well as threats. Worse was to come. On October 31, 2004, at 12:30 p.m., 500 Wahhabis organized under the title “Jihad” again set the Meditation Centre ablaze, destroying its library, along with homes and businesses owned by Sufis. Financial loss to the injured parties was considerable, and one Sufi was shot and killed while another was wounded by gunfire. Thareekathul Mufliheen’s president Hameed accuses police of assisting the assailants. Eight alleged perpetrators were arrested, but were released on bail with no further consequences. A complaint was entered at Police Headquarters in Colombo in 2004, and a subsequent protest was filed with the Sri Lanka Human Rights Commission (HRC) in 2005.

The HRC found in favor of the Sufis, stating that their constitutional right to adhere to the belief of their will and choice had been violated, and submitting recommendations for redress to the Inspector General of Police. But Thareekathul Mufliheen asserts, “Sadly, the Police were inactive in implementing these recommendations in an equitable manner.” Still, the Meditation Centre and headquarters were rebuilt and a birthday celebration for the founder of the order was held on July 25, 2006, with 15,000 people provided free food.

Sheihul Mufliheen M.S.M. Abdullah (Rah) died on December 6, 2006. Wahhabi preachers from the Thawheed network and the armed “Jihad” incited the local clerics and politicians (Jamiathul Ulama Kattankudy, the Muslim Federation of Mosques, and the Urban Council of Kattankudy) to oppose his burial according to Islamic rites, in the Meditation Centre, as he was a supposed “apostate.” Another member of the Sufi order had died on December 1, 2006, was buried that day, and on December 2 was exhumed by Wahhabis on the same pretext and laid out on the soil. According to the Wahhabis and their accomplices, “apostates” could not be buried in Kattankudy.

The Jihadis, armed with lethal weapons, rioted after the death of Abdullah (Rah), bringing life in Kattankudy to a halt by a general work stoppage (hartal). Schools, government and private offices, banks and businesses shut down and some banks and shops were looted and burned. The official clerics of All Ceylon Jamiathul Ulama, Jamiathul Ulama Kattankudy, the Muslim Federation of Mosques, other Islamic organizations, and the Kattankudy Urban Council initiated a judicial argument on December 11, 2006. They denounced the interment of Abdullah (Rah) as defying Muslim norms and traditions and charged that Thareekathul Mufliheen had failed to seek permission from the authorities for the burial. The petition by the official clerics and Wahhabis was dismissed in 2007. But the Sri Lanka HRC declared in 2007 that it could not “interfere in the disputes between various sects of a religion” and recommended the conflict be referred to the Council of Ulemas – All Ceylon Jamiathul Ulama, or to the Ministry of Religious Affairs.

In a separate controversy, the Urban Council in Kattankudy had ordered the dismantling of the minaret at the Meditation Centre, as an “unauthorized structure,” in a decision announced on December 13, 2006. Police prevented commencement of the demolition, but Wahhabi fanatics interfered with the officers. Three rioters were shot and killed. A police post and police vehicle were assaulted. On December 15, 2006, nevertheless, members of the Urban Council joined a Wahhabi mob that invaded the Meditation Centre and knocked down the minaret, removing the body of Abdullah (Rah), either burning or reburying it in a location yet unknown. The houses of 117 Sufis were leveled by fire. Many were threatened and fled the district. Two were injured, and one lost an arm.

Evidence of persecution of Thareekathul Mufliheen was submitted to Asma Jahangir, United Nations Special Rapporteur on Freedom of Religion or Belief, during a visit she made to Sri Lanka. In her 2008 Report to the UN, the Special Rapporteur expressed “regrets that she has not received a reply from the Government [of Sri Lanka]” regarding the 2006 incidents. She affirmed that “the Government of Sri Lanka has to fulfill its positive obligation to protect the right to freedom of religion or belief of all its citizens… in most of the cases that have been brought to her attention… these obligations have not been satisfactorily fulfilled by the Government.”

The 2007 International Religious Freedom Report issued by the U.S. Department of State noted the Wahhabi interference with Thareekathul Mufliheen. Since then, however, abuses against the Sufis of Kattankudy have continued, with the Wahhabi Thawheed faction in the forefront of violence. Official ulema and the village authorities attempted unsuccessfully to prevent celebration of a Sufi festival in 2008. That year, a Sri Lanka Supreme Court order, providing that 200 members of Thareekathul Mufliheen be allowed to return to their homes in Kattankudy and practice their beliefs in freedom, was obstructed by armed Jihad members.

In February 2009 a 150-year old shrine was destroyed by Thawheed in the city of Ukuwela, in the central hill country of Sri Lanka. Conflict in July 2009 between Thawheed and the Qadiri Sufi order, in the southwestern town of Beruwala, led to two deaths, more than 40 people injured, and 132 arrests. The Qadiri devotees complained that the Wahhabi mosque in their town, named Masjidur Rahman (Mosque of the Merciful) had accused the Qadiris of the Bukhari Thakkiya mosque of being qafirun (“disbelievers” or “concealers of the truth”) continuously in the eight years since the Wahhabi mosque was inaugurated.