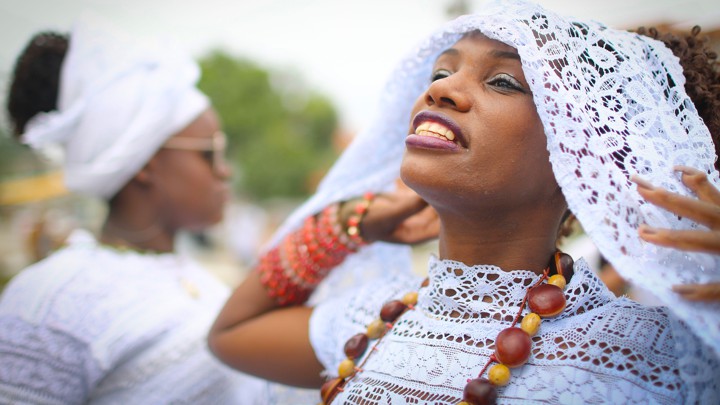 “We may not be Christian here, but we still pray,” said a woman dressed entirely in white as she addressed a large audience of African American women. Standing behind a lectern, speaking in the cadences of a preacher, she added, “I understand God more now, doing what I’m doing, than I ever did in the Church.”

The call and response that followed (“No one’s going to protect us but who?” “Us!”) was reminiscent of church—but this was no traditional sermon. The speaker, Iyawo Orisa Omitola, was giving the keynote address last month at the third annual Black Witch Convention, which brought together some 200 women in a Baltimore reception hall. The small but growing community points to the hundreds of young black women who are leaving Christianity in favor of their ancestors’ African spiritual traditions, and finding a sense of power in the process.

Over the past decade, white Millennials have embraced witchcraft in droves. Now a parallel phenomenon is emerging among black Millennials. While their exact numbers are difficult to gauge, it’s clear that African American pop culture has started to reflect the trend. In the music industry alone, there’s Beyoncé’s allusion to an African goddess in Lemonade and at the Grammys; Azealia Banks’s declaration that she practices brujería (a Spanish term for witchcraft); and Princess Nokia’s hit “Brujas,” in which she tells white witches, “Everything you got, you got from us.”

African American witchcraft originated in West Africa, the birthplace of Yoruba, a set of religious traditions focused on reverence for ancestors and worship of a vast pantheon of deities known as orishas. Those traditions accompanied West Africans who were brought to the Americas as slaves, and were eventually combined with Western religions, such as Catholicism, that many slaves were pushed to embrace.

By the early 19th century, Cuban Santeria, Brazilian Candomblé, Haitian Vodou, and other syncretistic faiths had emerged as a result. In cities like New Orleans, voodoo (slightly different from Haitian Vodou) and hoodoo, which also descend from West African faiths, grew popular. These practices—which often involve manipulating candles, incense, or water to achieve a desired result—may have helped give slaves some sense of power, however minimal.

Modern black witches are practicing Yoruba-based faiths, with a few Millennial touches. They build altars to ancestors so they can seek their advice on everything from romance to professional advancement, cast spells using emojito help banish depression, surround themselves with crystals in the hope that they will relieve stress, and burn sage to cleanse their apartments of negative energy.

Some hallmarks of Millennial spirituality are common to both white and African American witches. They’re typically disillusioned with hierarchical institutions—the Catholic Church, for example—and attracted to do-it-yourself “spiritual but not religious” practices such as the use of crystals. But the budding black-witch community also has unique traits, including a desire for “safe spaces,” a wariness of cultural appropriation, and a penchant for digital religion.

Many black witches, nervous about practicing witchcraft openly, feel more comfortable meeting online than in person. Some fear they’ll be shamed by devout Christian parents, according to Margarita Guillory, a Boston University professor who studies Africana religion in the digital age.