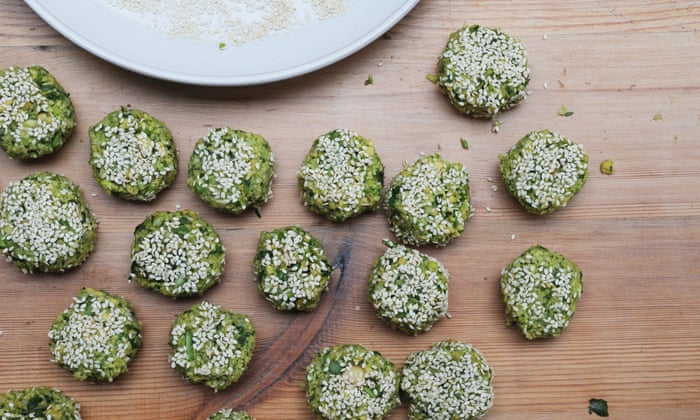 With a little practice you’ll be making tasty falafel like an old hand. Photograph: Jill Mead for the Guardian

A trip to Alexandria confirmed the best way of making falafel is not the most common. Try replacing chickpeas with superior fava beans, just like the Egyptians

A few years ago, I set out to discover who made the world’s best falafel. The dish had been a staple on the Leon menu in one form or another since we opened, but I felt we had yet to perfect the recipe.

I started my quest by calling the great culinary anthropologist Claudia Roden, who declared with refreshing certainty that the best falafel was to be found in Egypt. They made it with fava beans (a kind of broad bean which is also grown in Britain), she explained, which made it lighter and moister than the falafel made from chickpeas elsewhere in the Middle East. In Egypt, she said, the best falafel were widely acknowledged to be found in the Mediterranean port of Alexandria. So that is where I went.

Once a cosmopolitan city filled with louche Europeans, Alexandria is no longer a place of beauty. Its neo-classical and art deco villas, in melancholy decay since the Westerners fled during the Suez crisis in 1956, are now squeezed between the square shoulders of concrete high-rises. But man, can the Alexandrians cook. 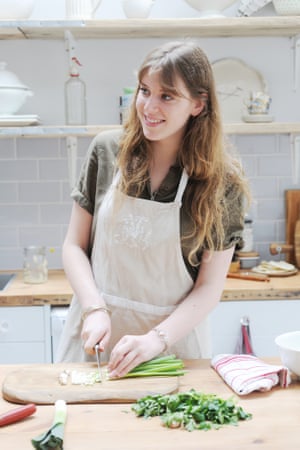 Healthy, tasty and satisfying to make, falafel are a great food to make in advance, then keep in the fridge until needed. Photograph: Jill Mead for the Guardian

From the chargrilled corn-on-the-cob sold by street vendors on the Corniche to the delicate broth of crab and clams I slurped at an upmarket restaurant behind the boatyards, everything was cooked with a rare love and attention to detail. And everyone I spoke to agreed: the best place for falafel was the bustling fast-food institution Mohamed Ahmed.

Here, for under a pound, I ate until my innards begged for mercy: great pyramids of piping hot falafel – light and crispy on the outside, creamy on the inside, flecked green with fresh coriander and spring onion.

I asked to speak to the chef, and they led me into the street and round the corner to an imposing wooden door. It opened on to a dark, high-ceilinged room, lit only by the flame from a gas burner under a huge vat of oil. Sitting beside the vat was the chef, repetitively forming falafel in the bowl of his hand and tossing them with a flick of his thumb into the oil at a rate of about 30 a minute. Every now and then he would scoop them out with a huge slotted spoon and pass them to a runner, who would sprint back to the restaurant to place these perfect golden nuggets on to the Formica tables.

I got the feeling he had been there, flicking perfect falafel into a vat, for at least 100 years. You and I will never match his expertise, but it’s worth a try. This recipe will take you as close to falafel perfection as you can get without a plane ticket. 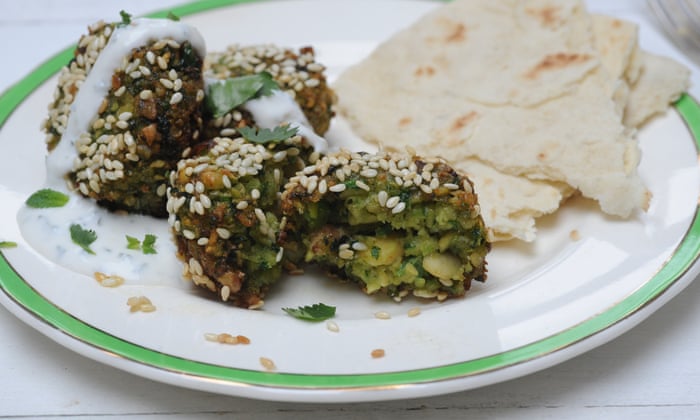 Serve with a simple minty yoghurt sauce and some flatbread. Photograph: Jill Mead for the Guardian

1 Drain the split fava beans well in a sieve or colander. Tip them into a food processor, along with the rest of the ingredients, except for the sesame seeds. Blitz the ingredients to a rough paste and tip it out on to a clean surface.

2 Divide the mixture into 12-16 pieces, each about the size of a small golf ball. Press them down with your fingers to make small patties.

3 Sprinkle around 3 tbsp sesame seeds on to a plate and coat each side of the falafels roughly with the seeds. Transfer them to the fridge for at least 10 minutes.

4 To cook the falafel, fill a small pan with oil to a depth of about 3cm. Heat the oil – it will be ready when a piece of bread dropped in sizzles and turns brown quickly. Turn the heat down and start to cook the falafel in batches. I cooked mine 4 at a time and kept them warm on a baking tray in a low oven. Cook each side for 2-3 minutes, or until it is golden brown then flip them over and fry the other side.

5 Serve with a minty yoghurt sauce (see below), flatbreads and spiced aubergine (recipes below).

1 Whisk all the ingredients together, then thin the sauce down to a suitable pouring consistency with a little cold water.

To read the rest of the article please <a href=https://www.theguardian.com/lifeandstyle/2015/mar/20/worlds-best-falafel-recipe-henry-dimbleby-back-to-basics