originally from The Economist 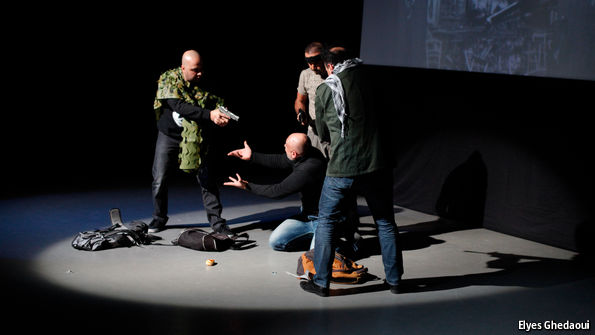 THE provocation starts with the show’s title: Djihad, the French spelling for jihad. Three young Belgian Muslim men, Ben, Reda, and Ismaël set out to travel to Syria. Each was born in Brussels; each has been brought to despair by their failed lives in Europe. Each expects to find meaning by embarking on a holy war, killing infidels and building the Islamic State.

Despite the serious subject, the hit Brussels play is a comedy, poking fun at the characters’ racism, anti-Semitism and ignorance. The three jihadists bumble their way through security at the Brussels Airport. They make it to Turkey, and from there to Syria. But disillusion soon sets in. As a child, Ismaël adored the comic-books of a character called Bob The Sponge. Yet the more religious Reda tells him that drawing is anti-Islamic, and that the artists are infidels. Ben is shocked. “Even the guy who drew Bob The Sponge?” The audience erupts in laughter. Another taboo is rock and roll music. Ben grew up as a fan of Elvis Presley, dreaming of becoming a rock star. In Syria, this attachment becomes dangerous, and not only because of Presley’s subversive music. “Did you know his name is Elvis Aaron Presley?” Reda asks. “He was Jewish.”

In “Djihad”, truth becomes distorted—and dangerous. Caught between the world of the West and the world of Islam, Ismaël cannot become an artist, cannot become a rock ‘n roller. Reda's parents reject his Catholic girlfriend. The disillusioned, ignorant Islamists end up witnessing and participating in carnage. And in a frightening rehash of current events, they return to Belgium as homegrown terrorists.

Originally scheduled for just five performances in December 2014, “Djihad” has continued on tour ever since, playing to packed houses in Belgium and France. Reviews have been gushing. It was broadcast on Belgian television last November just after the attacks in Paris. More than 47,000 people had seen it live, including 25,000 high school students, making a giant hit. The play is funny and moving at the same time. Though it skirts with stereotypes and a few scenes suffer from a little wooden acting, for the most part it moves along a good clip, never boring or overtly moralising—a gripping presentation of tortured souls caught between two worlds, rejected by both.

At a recent performance, students—most from a Muslim background—filled the Le Public theatre in Brussels. Once the show ended, Ismael Saïdi, “Djihad”’s playwright who also plays Ismaël, held a cathartic hour-long discussion with them. The 39-year-old elaborated on the elements of the play that were drawn from personal experience; Reda Chebchoubi (who plays the character of the same name) had a Catholic girlfriend who was rejected by his parents. When Mr Chebchoubi's parents saw the play, they winced at the unflinching portrayal of their closed-mindedness. Mr Saïdi also believes he escaped a jihadist fate by going to a school outside his neighbourhood. “Education is the only way to prevent radicalisation,” he says.

He had performed the play the night before the recent Brussels bombings, and sees the need to continue performing the play in Belgium and France. A Dutch version recently opened in Amsterdam. It has not yet been translated into or performed in English, but Mr Saïdi dreams of taking it to Britain and America in the future. The West has heard plenty about ghettoes like Belgium’s Molenbeek and the radicalisation of Muslims in Europe. This is another facet of home-grown European Islam—funny, critical and self-aware—that not only Belgians and Dutchmen but Brits and Americans need to see.