Rohingya children, who hope to build better futures, are suffering from children rights. Before becoming grown ups, they are already getting punished for the crimes of being belonged to Rohingyas who were once compelled to flee their own country and become illegal immigrants for countries where went to and Refugees for international people. In short, thanks to Myanmar government, today Rohingyas are very well known as stateless persons. Because no country is willing to adopt or resettle them permanently. While expecting for International Community, world leaders as well as UNHCR to find political stability and durable solution to their statelessness, the hope for a change in their life is a distant one. 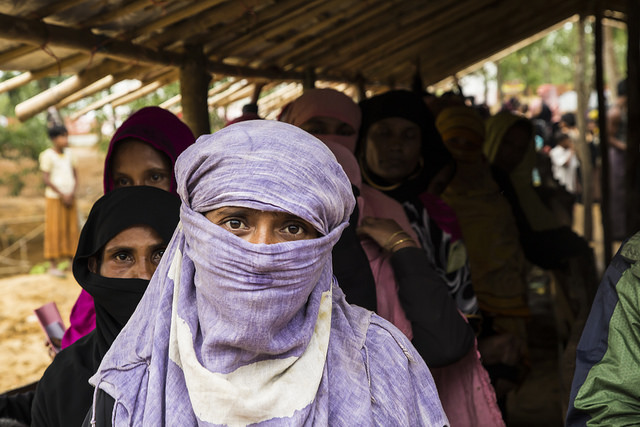 Nur Aziza is a 15-year-old Rohingya refugee who has been living in Indonesia with her father, Sayed Alam, and her younger brother, Mohammed Hubaef Rafael. Their livelihood is supported by International Organisation for Migration (IOM), while the United Nations High Commission for Refugees (UNHCR) takes the responsibility for their safety and security, and assesses their refugee status.

Whilst it seems that there are a clear order and process for refugees and asylum seekers, things often do not turn out as expected.  While on the way to Indonesia from Malaysia and with the hope of finding resettlement in Australia, Nur Aziza and her family found with great frustration and disappointment that their lives were taking a turn for the worst. After spending 5 years in Indonesia, UNHCR remains unable to explore opportunities for their movement to a third country for many reasons.

Nur Aziza, a diligent and inspiring girl, wants to speak on behalf of Rohingya children by sharing her refugee life story.

On the 2nd day of October 2001, I was born into a refugee family in Malaysia and became one of them. I, Nur Aziza, belong to an ethnic group (Rohingya) already recognized by the world as one of the most isolated and persecuted minorities on earth; they have been subjected by the Burmese people to a slow-burning genocide for a long, long time.

Imagine if, in your own country, you were denied an identity or a place to call home. If your rights to study, work, travel, marry and practice your religion didn’t exist – because you do not belong anywhere. It is as if you didn’t exist. You’re not given any avenue through which to prove who you are or where you’re from, which restricts your ability to gain full citizenship status and totally defines your life as a non-citizen. Wherever you try to find refuge you are locked up in detention because of who you are.

Under the circumstances above, my family had no option but to leave their homeland Myanmar to find a new home, hoping to live in peace with dignity. They left for Malaysia in 1993. Unfortunately, Malaysia, like many of its neighbors, has not signed the United Nations Convention for Refugees, which means there are no laws to protect refugees. As a result, I, like all refugee children, was cut off from the basic right of a child to education and healthcare due to my unresolved status and lack of identity documents.

I, having seen Malaysian children going to school, college and university, also wished to enjoy my childhood rights, which included studying with friends and fulfilling my dream, in my case, of becoming a lawyer. Many times, my father tried to school me but failed because of our problems with lack of funds, security and identity. The only school I could go to was a “Madrasa”, a community school funded by donations, where I could learn about religion, Malay language, and other literacy basic skills. This was not a path that could lead to higher studies or reaching my dream of becoming a professional person, a lawyer.

Despite the fact that our family had lived for twenty years in Malaysia, we were never given a chance to call that place our “home”, nor were we helped by the government or the UNHCR to relocate in a third country. Additionally, we suffered from the constant fear of being deported and harassed, abducted, and detained. The saddest thing was that it was almost impossible for a Rohingya, no matter how bright or hard-working, to find a well-paid job other than being a daily worker wandering from place to place for a living wage.

However hard the living was in Malaysia, we somehow managed to survive it, but the moment when everything changed was the year 2009, when my beloved mother, Safika, died due to lacking medical care.

Consequently, not having an alternative, we decided to leave Malaysia with a high expectation of finding a way to get to Australia as we heard that Australia respects human rights and assists vulnerable people with humanitarian policies. Moreover, To make things easier for us, firstly, my father fled Malaysia. Unfortunately, he was not able to make it to Australia. On the way, my father was arrested and detained in Tanjung Pinang Detention Centre for one year, while my brother and I were sheltered at my uncle’s home, which is in Kuala Lumper, Malaysia.  When eventually my father was released from detention in Madan, he brought us there, and we were then transferred to an IOM facility in Makassar and they accommodated us with the help of Australian-funded support.

I thought my new life in Indonesia would be much better than it used to be in Malaysia, but this was not to be; rather, it is getting worse day after day as I am growing older. Every day, when I wake up in the morning my first thought is that I long to see a change in my life. Drifting into day-dream, I escape into a world where I see myself going to school, studying, drawing, painting and, doing homework with a large number of students. However, when I get up my dreams are shattered and all I can see is a small smoky room and the only education I can receive is English from English center called LIA, which I attend three times a week.

Like as in Malaysia, we are deprived of basic rights and restricted in our movements. Whenever we ask the UHNCR about our resettlement process they reply, “we have already sent your files to the third countries, and they are under process.”  Until now, we have not received any proper information from the UNCHR regarding our resettlement, and neither have we seen any improvement or hopeful development in our life.

To sum up, one can conclude my life in Indonesia is like living in an open prison. However, and despite all odds, I do manage to do home-study every day to improve my English as I believe that my dream to become a lawyer will come true and real one day.

“If you desire something with all your heart, the whole universe will work towards getting you that.”

This is my story as Nur Aziza, a Rohingya refugee girl.