All too often our news feeds are filled with stories of division, prejudice and heartache. So, it was a welcome surprise that a little falafel shop in Knoxville, Tennessee was just named as the “nicest place” in the United States.

Yassin’s Falafel house was chosen amongst a nearly limitless list of possibilities so it’s all the more inspiring to see. 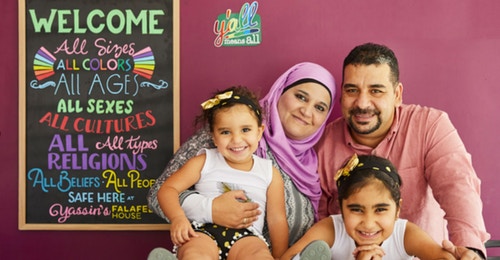 A big part of what makes this story so special is that Yassin Terou and his family are Syrian refugees who came to Tennessee seeking a new and better life. They've become beloved members of their community, serving up delicious food and kindness.

When they arrived in America in 2011, Terou and his family spoke little English, had no friends and relied on fellow attendees at their local mosque for food. Eventually, Yassin began selling sandwiches at the mosque, which eventually led to him opening his falafel shop.

He's kept the kindness going, making a point to embrace people of all faiths and backgrounds, saying it's his way of paying back the love and acceptance his family received when the arrived in America.

“Breaking bread is not only food inside your stomach, but it’s also love you feel," he said.