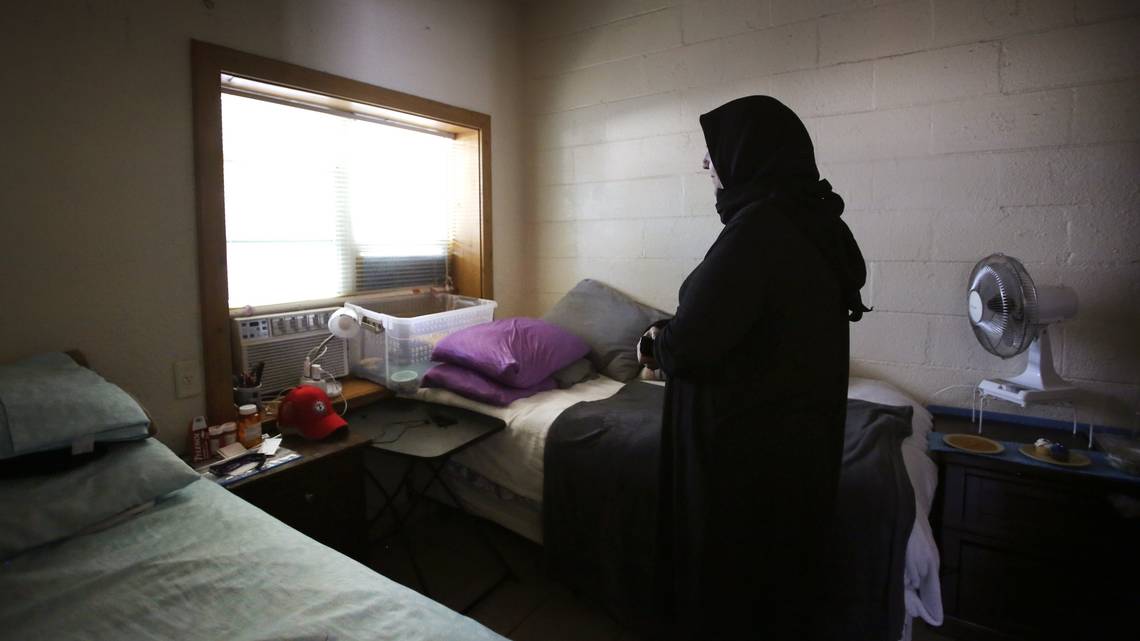 Rima Khoudari Nachawati first arrived in Arlington from Damascus, Syria when she was 22.

She and her husband had married in Syria but he moved to Texas without her for work. Nachawati was studying law at a university in Lebanon at the time, but left school to join her husband in 1981. Their first son was born in 1983, the second in 1985, and the third in 1992.

“When he divorced me, he [kicked me out of] the house,” Nachawati said. “He remarried and I had to find somewhere to live.”

Be the first to know when big news breaks

All of her education was completed in Arabic and she didn’t speak English fluently then, making it difficult to find a job. She had also been diagnosed with diabetes. She said she stayed with a friend in Dallas for some time with sporadic contact with her sons over the years.

“My oldest son has his master’s, my second son finished college and the youngest is studying engineering,” Nachawati, now 59, said. “So, alhamdulillah, they’re all doing good.”

In 2011, she met Baquee Sabur and his wife Khalida at Masjid Dar El-Iman in Arlington. When she told them about her situation, they offered to help. She now lives in Khadijah’s House, a shelter in Fort Worth that was originally opened for Muslim women, but has since integrated to help women of all faiths and backgrounds.

Baquee Sabur is the founder of Huma-Faith, a non-profit organization that aims to address several issues such as homelessness, substance abuse, domestic violence, mental health and others.

Sabur opened Khadijah’s House in United Riverside to help Muslim women in the Metroplex who have faced such issues.

He said the house became an interfaith shelter in order to keep it afloat. Their only religion-based rule in the house is no pork.

“At the core of our mission statement, we want to create an environment where people can find congruence between their religion beliefs and their actual lifestyle,” Sabur said. “We recognize that when you’re homeless and on the streets or trying to fend for yourself, it’s very difficult to be who you say you are. Muslim, Christian, Jewish, it doesn’t matter. It’s going to be difficult to be practicing when you’re dealing with being on the streets.”

Currently, Khadijah’s House is home to nine women. Some declined to speak on the record or give their full names because their families and friends don’t know the extent of what they’ve been through or how they got to the shelter.

Why Huma-Faith needs all the support it can get.

According to the Tarrant County Homeless Coalition, there were at least 6,701 homeless people in the county as of September 2017.

A 2017 report from the Institute for Social Policy and Understanding shows that Muslims nationwide are most likely to identify as low-income, meaning their household income is $30,000 a year or less. Of that population, 44 percent of Black Muslims reported as low-income.

Sabur explained that while other entities do good work to address homelessness, it can be a suppressive environment for someone who does not identify with the faith.

“A lot of the other shelters mandate a particular time period in which they must congregate for religious ceremonies, so they wouldn’t be exempt from that,” Sabur said. “And rightfully so. If you’re in somebody’s house you follow their rules. We have a different approach. We create an environment where people are free to be who they say they are.”

A copy of the Quran sits on a dresser at Khadijah’s House in Fort Worth, Texas on Wednesday, Aug. 15, 2018.
Brad Loper

Sabur is dedicated to empowering people in need because he used to be one of them.

Born in Brooklyn, raised in Atlanta and having served in the Army, Sabur said he was once homeless in Houston. He found himself living under a bridge due to drug use.

As a new convert to Islam with a broken arm that disabled him from finding work, he turned to a Christian organization.

During the interview with the shelter managers, he was asked about his faith. When he told the managers that he was Muslim, they rejected him from their program.

Sabur said he understood why. It was a discipleship, meaning that in order to live at that shelter, he would have to participate in Bible study and other Christian practices.

But Sabur had other plans.

“I said ‘OK, you’ve made your decision and now I’m making mine. I’m not leaving from this chair until you let me in. Go ahead and call the police because I would rather go to jail than sleep outside,’” he recalled. “They said, ‘But you’re Muslim!’ and I said, ‘I’m in your house so I’m going to follow your rules.’”

Sabur said people have explained to him why they are hesitant to donate their money or time to Huma-Faith.

Some think that Christians and Muslims shouldn’t cohabitate this way, but a lack of sufficient funding has left Sabur with few options. According to its 990 data from 2016, Huma-Faith’s income amounted to a little over $165,000 while its expenses totaled $159,000.

Huma-Faith is registered as a public charity, but gets little support from the public, Sabur said. The Islamic Center of Irving is the only entity that gives regularly. But Sabur said that while the $350 monthly donation is appreciated, it costs at least $10,000 a month to maintain Khadijah’s House and its residents. Huma-Faith also runs a home for men.

Huma-Faith founder Baquee Sabur outside of the homeless shelter for Muslim women, Khadijah’s House, in Fort Worth, Texas on Wednesday, Aug. 15, 2018.
Brad Loper

Instead of just giving them a place to live, Sabur makes arrangements for mental health and career counseling to get the women back on their feet. Everyone is required to pay $10 each day to stay there and he helps them find opportunities to make that money.

“There’s prejudices from both populations,” Sabur said. “It’s very difficult being an African-American Muslim and trying to engage the Christian organizations and populations for support, not necessarily for me, but for the Christian population we’re housing. On the other side, it’s hard engaging the Muslim community. They’re asking me how many non-Muslims are there.”

Play Video
DurationÂ 1:45
Why Huma-Faith needs all the support it can get.

Huma-Faith provides shelter to mostly Muslim homeless people in Fort Worth. Baquee Sabur, the founder, explains that the reason they get so little support has to do with a lack of understanding of what causes homelessness.

There’s also been skepticism about how Huma-Faith operates. Sabur said the lack of staffing concerns people, but he can’t staff the organization without being able to pay them. This also makes it difficult for Huma-Faith to qualify for grants.

Sabur said he probably should have dissolved the organization five or six years ago, but he couldn’t bear the thought of putting people back on the streets. He posted a plea for help a few weeks ago on Facebook, which was met with little reaction.

He said he doesn’t like asking people for distant donations, but instead wants them to come see what Huma-Faith provides and why people should invest their money and time in the organization.

For now, most of Huma-Faith’s income comes from Globe Life Park, AT&T Stadium and other concession venues, which invite non-profits to raise funds by operating concession stands. But even there, they receive 10 percent of the revenue.

It’s not much money, but Nachawati said the work experience gives her and other women the confidence and independence they need to persevere.

Resident Melinda S. checks the balance on a Walmart card in her room at Khadijah’s House in Fort Worth, Texas on Wednesday, Aug. 15, 2018.
Brad Loper

Sabur is also working on contracts with janitorial companies and agreements for cleaning and light construction opportunities so the residents at the men’s and women’s shelters can earn a living wage.

“We’re putting ourselves out there to be a workforce,” he said. “We’re willing to go to work and earn our money as well.”

Grateful for the resources

Racing around the front yard of Khadijah’s House is Omari, Sabur’s 6-year-old son. A ball of energy before school starts, Omari spends time with the women at Khadijah’s House while his dad works with them.

Omari runs into the house and plops himself onto Nachawati’s lap on the sofa. She wraps her arms around him and shows him photos on Facebook of her family in Damascus. Her elderly mother still lives there with her siblings. She speaks to them on the phone every few days. The civil war in Syria and the costs of travel make it impossible for Nachawati to see them again.

A single bedroom at Khadijah’s House in Fort Worth, Texas on Wednesday, Aug. 15, 2018.
Brad Loper

Living at Khadijah’s House with other women who have faced similar hardships gives Nachawati a community. But her frustrations with her ex-husband, her children and her living situation still linger. She was a mother and a homemaker for most of her adult life, and in turn, unprepared for the repercussions of her divorce.

She’s not sure what she’ll do when she leaves Khadijah’s House. But she’s grateful to Sabur and Huma-Faith for providing the space, resources and patience to figure it out.