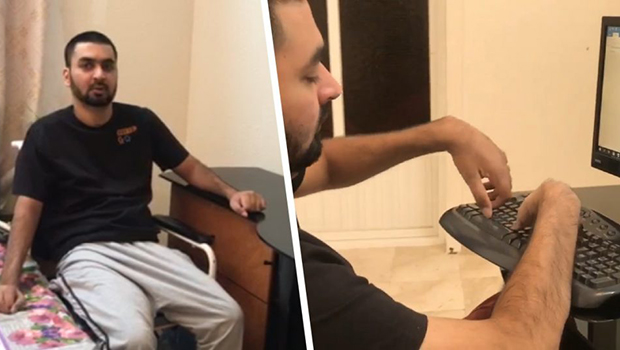 Naveed Iqbal is a Pakistani Muslim who has challenged his paralysis to success, working now as a web designer, IlmFeed reported.

“After my family, the people of this country are the kindest people I’ve ever experienced in these ten years. They not only help me to pick me from my wheelchair when boarding a car (they even kiss my forehead & give me prayers,” says Iqbal.

Living in Saudi Arabia over the last 28 years, Iqbal suffered some life-changing injuries after a tragic car accident in Jeddah in 2008.

Iqbal’s lungs collapsed and he was put into intensive care. After a month on a ventilator, he returned to consciousness but was unable to talk for around eight months due to having a windpipe installed in his neck to help him breathe.

The youthful guy was diagnosed with Quadriplegia, a form of paralysis which occurs below the neck. His spinal cord was injured and had a fracture on his right pelvis bone. Both of his hands, neck, and arms were no longer functioning.

After a decade now, Iqbal can move his hands but he struggles to move his fingers. He can only move his right-hand thumb maneuvered slightly and he has sadly lost his sensation from the neck-down.

Despite the hardships, Iqbal hasn’t allowed his paralysis to stop him from achieving his life goals. He has learned web designing and painstakingly designs websites for Fitheme with his limited mobility using just his thumbs.

Recently he developed an app for pilgrims and locals called Mecca Guide, physically visiting each location to add them himself. The Android app version is now available and Iqbal is even currently working on an iOS version.

Iqbal’s strength and determination is surely a source of motivation for us all. Islam teaches Muslims that every hardship and suffering is an opportunity because it’s more than what you see.

Allah the Exalted states in Surah Baqarah: “And We will surely test you with something of fear and hunger and a loss of wealth and lives and fruits, but give good tidings to the patient. Who, when disaster strikes them, say, “Indeed we belong to Allah, and indeed to Him, we will return.” Those are the ones upon whom are blessings from their Lord and mercy. And it is those who are the [rightly] guided  [Al-Qur’an 2:157]

He also says in another chapter: “[He] who created death and life to test you [as to] which of you is best in deed – and He is the Exalted in Might, the Forgiving”  [Al-Qur’an 67: 2]