By: Rita Goldstein for Al-Monitor 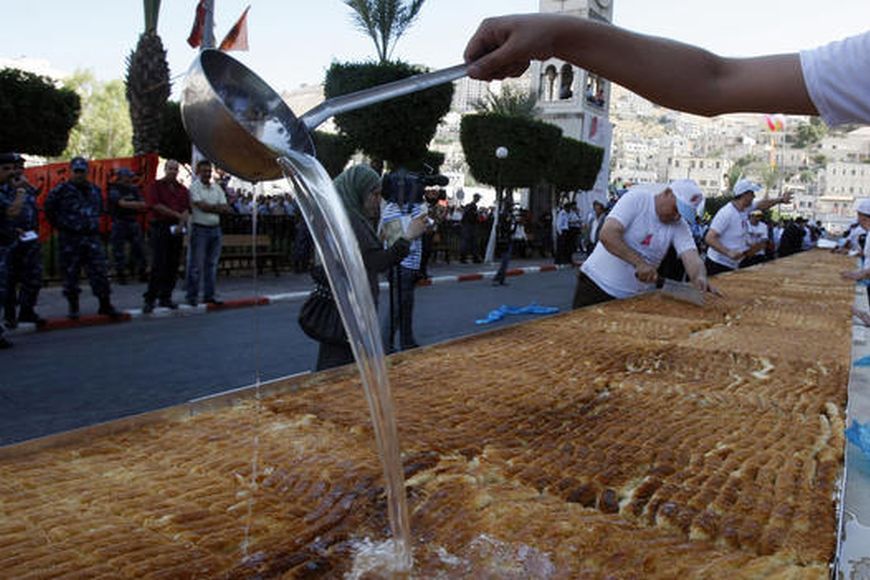 "Cooking is a combination. You don't want to get stuck or focus on any one food, otherwise you become like everyone else. You have to go in a variety of directions, and bring back something from each place in order to create your own kitchen yourself, and not someone else's," says Chef Claude Avery. Sitting around the table next to Avery in the Catit Restaurant in Tel Aviv are chefs Meir Adoni and Johnny Goric, who nod their heads enthusiastically in agreement. "To me, each chef is different," continues Avery, "it's like when Cezanne draws something and Picasso draws something. True, there are people who appreciate Cezanne more and others who prefer Picasso and it's impossible to make everyone happy, but when someone gets something different on their plate, you've done your work as chef. That's what I love in the kitchen. To create excitement. That's why I'm very impressed here today."

Summary⎙ Print A Jew, a Palestinian and a Frenchman walk into a restaurant in Tel Aviv, writes Rita Goldstein. No, this is not the beginning of a joke, but a fascinating discussion between three leading chefs about the culinary traditions of the Middle East.
Author Rita GoldsteinPosted August 13, 2012
TranslatorSandy Bloom
Dinner and an encounter between the three chefs in Adoni's elite restaurant created a fascinating Middle East culinary conversation. Avery, 42, has been the executive chef of the Jordanian royal family for about eight years, and he met Goric, 38, when Goric had the same position. Afterwards, Goric established a prestigious Italian restaurant in the only five-star hotel in the Palestinian Authority, the Intercontinental Jericho (the restaurant has already closed). Now he is executive chef of the Cardo Restaurant in the five-star Legacy Boutique Hotel in East Jerusalem. The combination of Jewish chef, Palestinian chef and French chef (the latter spent his career years in Lebanon and Jordan) creates an interesting state of affairs that integrates dozens of years of gastronomic education and experience, without the need to say one word about politics.

At the beginning of the get-together, Adoni apologizes tongue-in-cheek to Avery, who cooks for the king and queen of Jordan, about the modest structure that houses the Catit Restaurant in the center of Tel Aviv. The French chef is amused at the apology. "The title of 'palace' is misleading," Avery explains. "People live regular lives there. To others, it is the royal family.  To me, it is a regular family. You like to cook for your friends? It's the same thing for me. It's not because they are royal. They do the same things we do."

"Everyone in Israel really likes the Jordanian royal family," says Adoni. "We admire them. King Hussein was a famous figure to us." "Definitely," agrees Avery, "Because he had respect. When you live side by side, you have to have mutual respect. People have to get that into their heads." It is not clear if Avery is saying that in connection to life in the Middle East, or as a modest reflection on his lifestyle near the royal family, or as an expression of his resolve to guard the royal family's privacy. When asked about the type of food he prepares in the palace, Avery prefers not to give a direct answer. "It's something private," he says, "I respect the fact that I work for this marvelous family."

"Do they prefer Western food or traditional Jordanian food?" asks Adoni. "Every day can be different. Everyone likes to vary their menus and not only eat what they have in their country," responds Avery.

While this answer may be true in regard to the royal family, it does not exactly characterize Palestinian culinary habits, according to Goric and Adoni. Goric and Adoni met in a project entitled MEP (Middle East Project) in which four chefs — Israeli, Palestinian, Norwegian and American — got together to travel around the world to promote a type of sanity in our region. When Adoni looked for a Palestinian colleague to cook with him as part of the venture, he ran into a problem. "I understood that I have to find someone who brings with him the traditional, folk aspect but who does it from a more modern approach," Adoni explains. " a chef whose credo involves the modernization of Palestinian food, as I believe in Israeli gastronomy." As he searched, Adoni found the issue to be complex. "The fundamental culture there is very strong. It's hard to change people's conventions and that's what I like about Johnny: he takes his kitchen to modern places while leaning heavily on the authenticity of his food. When you're talking about the Palestinian kitchen, that's very daring."

In your eyes, what are the limits of Palestinian cooking?

"In Mansaf , Maqluba , Msabbaha , Ramalla Shawarmas that are amazing, in Knafeh . This food is terrific! But it's strongly associated with tradition and you can't move away from that. Johnny tries to make it just a bit different, for example a Sabich course on Palestinian baked dough with sumac and onions, or a half-open portion of Kubbeh  on which he constructs a modern salad composition based on the same ingredients of regular Kubbeh. He is proud of his tradition, but wants to bring it a bit forward to the world. There are few Palestinian chefs who do this."

Gurac, whose restaurant resides on the sixth floor in Eastern Jerusalem and looks out on the Old City, agrees that where he lives there are almost no possibilities for modern culinary skills. "The restaurants there revolve around salads, pullet , steaks and Shawarma. My pullets, for example, I make them with lemon chili, pickled lemon and sumac on yakitori skewers. That's my special twist. They are still pullets, but I don't have to serve them barbecued on skewers."

Nevertheless, most of the customers are not Arabs. "There's only a small part of the Arab public that asks for this food," he explains, "There are a lot of embassies, and a limited crowd from the Israeli side because people are still afraid of traveling to East Jerusalem even though there's nothing to fear."

Has the Arab public become more interested in gastronomy over time?

"Interest is growing, but very slowly. Food is the hardest thing to convince people to try, because their culture at home accustoms them to certain foods. People find it strange to enter new food into their bodies. I can't convince anyone that the food served on his plate is delicious, if it's not tasty to him personally. If someone doesn't like something that's his personal taste and there's nothing to be done about that." These slow steps are also expressed in the way he adjusts the new dishes he learns about, to his community. "Not everything is appropriate," he explains. "I adopt those brilliant ideas that I think I can 'translate' for them. For example, hot yogurt soup with shrimps and tuna tartar. Arabs don't like uncooked shrimp and tuna tartar, but yogurt soup goes over well. So I can take it and integrate new things in it."

We are served courses like Indian cauliflower salad boiled in brown butter or seared white tuna with fresh lima beans and anchovies. Suddenly, Avery asks us to define "Israeli food." Adoni and Goric find it hard to answer. "We are a 64-year-old country," laughs Adoni, "there's confusion between regional food, connected to the entire Middle East, and Israeli food. Falafel, Hummus, Shawarma, we consider that Israeli food here. But others say it's Arab, Lebanese, Palestinian, while on our streets, it's totally Israeli."

"Here, everything depends on your ethnic group," says Goric. We reach the joint conclusion that Israeli food is a heterogeneous, patchwork mixture. "Today, Israeli food is a blend of amazing things that came from all over the world," explains Adoni, "Take for example the foods that Jews brought with them from Germany, mix it with food that Jews brought from Morocco, and you get results that are out of this world. Or Yemenite food with Polish food. Together-boom! I met a Polish girl and married her. Our kids are a blend of us both and it's amazing," he says to the sound of our laughter around the table.

Towards the end of the meal, Adoni shows the chefs candies made out of black olives; these olive-candies are part of a special dessert of ricotta tart with tomato confit, dried strawberries and olive candies drizzled with olive oil and sprinkled with fresh basil leaves and a bit of grated lemon peel. The chefs happily taste it and now we feel free to ask Avery, on his second visit to Israel, his opinion about gastronomy in Israel. "The level here is definitely higher than in Jordan," he says definitively in his French accent. "You Israelis have broader tastes because most of the people here travel around the world a lot. You have a palate that is ready for something a little different, that is open to taste things. Certain countries want their own food and are not ready to try anything else. I feel that in certain countries in the Middle East, that are not ready for adventurous foods. For creativity. But not here."

Aside from food, Avery speaks positively of the hospitality that is the rule in Middle Eastern countries. "My father-in-law is a much esteemed chef in France, and everywhere I went they would mention him and that irritated me so I left," he says. "I received offers in Los Angeles, Istanbul and Beirut and I chose the worst offer because I wanted to prove myself. When I got to Lebanon, I took a car and started to travel around. I am from a rigid, bourgeois French family and when people would say "come in, have some tea or coffee, just come" I didn't understand what they wanted, maybe to kidnap me, and then it was explained to me that I was on the wrong track entirely. That in the Middle East, there is something called hospitality, a welcome. People don't want anything in exchange, just to host me, and I was in shock. If today they would tell me and my wife to return to France, we would refuse. We are happy to remain in the Middle East."

According to Avery, the lack of hospitality is only a symptom of France's bigger problems. "The French kitchen was the best for years and years. But as a Frenchman, I tell you that they got it into their head and stopped searching elsewhere. They don't even look. Japan for example has amazing food, and today we've proved that Israel boasts first-rate chefs of the world. The French only say 'we're the best' but if you think you're the best,  then you'll definitely lose it. That's what happened to the Frenchmen. In my opinion, they are not open enough in the culinary field. I am not like that, I love flavor that surprises you. Not things that are too crazy, but that create contrast in the mouth. Something that causes people to say that it's different to them. That's the beauty of the kitchen, we are like magicians. I compare cooking to lovemaking; each person is different and you need to know how to satisfy your partner. Cooking isn't just for me, it's for my partner."