Analyses of trace elements in artefacts from 9th century Samarra, in Iraq, show a sophisticated production and regional trade of glass. 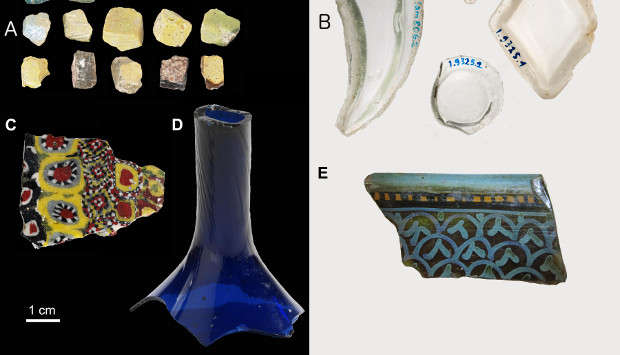 Glass artefacts from Samarra, including a range of vessel types, optical properties, and decorative techniques.
Images A, C and D from the Victoria and Albert Museum, London [http://collections.vam.ac.uk]; images B and E from the Museum für islamische Kunst / Staatliche Museen zu Berlin [www.smb-digital.de/eMuseumPlus]The study suggests glass was produced in or near Samarra, the Iraqi capital of the Abbasid Caliphate from 836-892 CE. Some items, such as mosaic tesserae–pieces of coloured glass, stone or tile–were imported from the Levant and Egypt to be re-used in Samarra.

Using mass spectrometry, researchers, including Nadine Schibille of the National Centre for Scientific Research in France, measured the levels of 58 trace elements in 265 well-dated glass artefacts from ninth century Samarra, selected from museum collections in Germany and England. The elements indicated the geographic origins of the raw materials used to make the glass.

The city of Samarra, about 125km north of Baghdad, is an important source of archaeological information on early Islamic art and architecture. It was famous for the glass walls in its palaces, but little was known about how the city’s glass objects were produced.

The investigations identified four distinct types of glass made from soda-rich plant ash (the residue left after plants are burned), as well as reused glass from an older Roman method of glassmaking using mineral soda, also known as natron.

The natron types of glass are characteristic of glass produced prior to Samarra’s establishment. The transition from the use of natron to plant ash in glassmaking is thought to have taken place toward the end of the eighth and early ninth century in the Levant and Egypt, for unknown reasons. The changes, however, corresponded with a eastward cultural shift, starting in the later Umayyad period (661–750 CE) and progressing with the foundation of Baghdad as the capital of the Abbasid Caliphate in 762 CE.

Schibille says the variations in the characteristics of the raw ingredients used to make the artefacts clearly reflect different technological strategies and geographical origins, and reveal economic and cultural interactions.

“Plant ash was more widely available, which might have contributed to the diversification of primary glass production sites. Chemically, plant ash potentially introduces all sorts of additional minor and trace elements compared to earlier natron, which is relatively pure,” Schibille says.