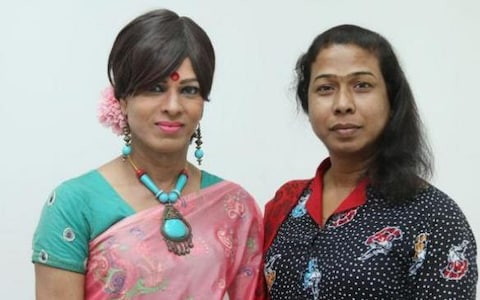 Ananya Banik (right), believes that allowing hijra to identify as such when voting will lead to greater recognition and respect of the community in Bangladesh CREDIT: ANANYA BANIK

Bangladesh's marginalised transgender community has finally been granted the right to use their correct identity to register as a voter.

Government officials have given full recognition to the hijras cultural status by creating a specialist "third gender" category on Bangladesh's national voters list.

Previously, the hijra community could only sign up to vote as men or women – but many avoided doing so because they did not feel adequately represented.

Now, individuals can register to vote using their own identity as a hijra.

Government estimates say there are around 10,000 hijra in the country although the Bandhan Hijra Singha, a transgender rights group, states that the figure is actually around 100,000.

The word hijra is an umbrella term which typically refers to people who are born male but do not identify as male or female.

Some hijra have undergone a full gender reassignment, while others have just had their male genitalia removed.

"From now onward, a third gender individual can be a voter with their own identity, as a hijra," said Abdul Baten, the Director of National Identity Registration.

"The press has already been ordered to print the new forms. Now they can identify themselves as hijras on the national voters list."

The existence of hijras has been documented as far back as 400 BC and they are also referenced in the Indian Kama Sutra text.

Historically, they enjoyed a semi-sacred status in Bangladesh and earned their living by singing and dancing at social celebrations like weddings. They were even invited to bless married couples and newborn babies.

However, over time, attitudes towards the group soured and they have become marginalised within Bangladeshi society, excluded from cultural, religious, political and professional life.

Many live in poverty due to a lack of employment opportunities, according to a United Nations Development Programmebook, and are forced to make a living from begging or working in the sex industry.

Other hijra have revealed that they are routinely refused medical care by doctors or the opportunity to rent property from landlords.

Human Rights Watch released a report in 2017 which detailed that hijra regularly received physical and verbal abuse from religious extremists in Bangladesh.

In one incident in May 2017, the country's police – known to physically and sexually assault members of the community – arrested 28 hijra and paraded them before Bangladeshi media claiming they were gay and should be prosecuted.