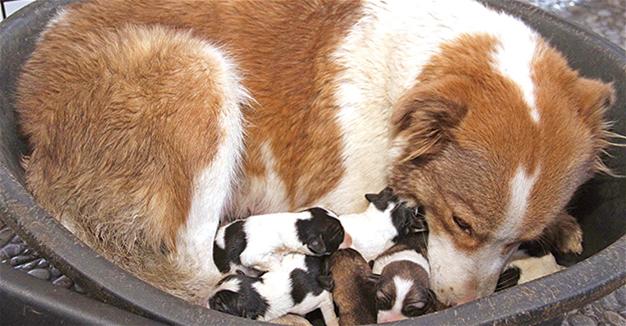 A stray dog that gave birth to seven pups inside an electricity tunnel in the northwestern Turkish province of Kocaeli, which was found last week by a shop owner just before the tunnel was closed for the construction of a tram, has been taken under the protection of the local municipality.

According to a written statement issued by Kocaeli Municipality, the dog and her pups are currently in the care of the municipality’s facility for stray animals.

“The animals are sheltered in a floor-heated room at the center, which is affiliated with the municipality’s veterinary,” said the statement.

“The center has many features, including heated shelters, wash basins, x-ray machines and ultrasound tools.  Now it has new guests, a dog and her seven pups, which were removed from a tunnel during the tram construction. They are in the care of the center and receive necessary treatment. The mother dog, which was weak in the first day, was given food supplement right away and gradually got better. After nearly 40 days of nursing, the mother will be vaccinated and people will be able to adopt the pups,” the statement said.