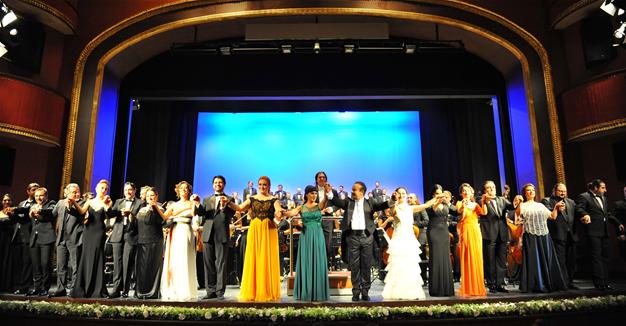 The Istanbul State Opera and Ballet (IDOB) has opened the 2016-2017 season with a concert that drew a large number of artists at the Süreyya Opera.

Speaking about the new season, IDOB Director and Art Director Suat Arıkan said the theme of the new season would be "Firsts," noting that he chose the masterpieces of composers whose works had never been performed in Turkey.

Arıkan said there would be three important works this season. "One is the first Verdi opera, ‘Ernani,’ which was staged in the Ottoman sultan Abdulmecid’s period. It is interesting that it was not played once again after the republic was founded. It is Verdi’s most favorite opera and made him famous abroad. It will be staged for the first time in Turkey by Turkish soloists and choir."

Arıkan said IDOB had been performing nearly for 75 years. "It has organized very important artistic events. When IDOB was 65, it gained Kadıköy Municipality’s magnificent Süreyya Opera as its second stage.

Arıkan said no Stravinsky opera had never been staged in Turkey, but that they would stage his "The Rake’s Progress" for the first time this season.

"At the end of the season, there will be a masterpiece again, Jack Offenbach’s ‘The Beautiful Helen.’ It is an entertaining play," he added.

Arıkan said 10 operas would meet art lovers over the course of the new season and that Selman Ada’s "Başka Dünya," which has previously been performed; Vivaldi’s "Bajazet;" Donizetti’s "Don Pasquale;" Gounod’s "Faust;" Rossini’s "La Cenerentola;" Britten’s "The Turn of the Screw;" and Bach’s "Kaffeekantate" would all be performed.

Arıkan said nine ballet works would also be performed.  "We have Tchaikovsky’s masterpiece ‘Sleeping Beauty’ as well as various ballet events as part of International Dance Day. Two of Stravinsky’s important works, ‘The Firebird’ and ‘The Rite of Spring’ , while the Modern Dance Troupe will perform ‘Giselle.’"

He also said they would give more concerts than the previous years. "There will be the Yunus Emre Oratorio, Turkish composers, New Year’s, ancient arias, Mother’s Day, Youth, Goethe Songs concerts, as well as the Leyla Gencer Memorial concert, a Belcanto concert, a Ravel Debudsy concert, Chopin, Liszt songs and many others.

Arıkan said the Süreyya Opera, Beşiktaş’s Fulya Art Center, Bakırköy’s Leyla Gencer Stage and Beyoğlu’s Emek Grand Pera would be the venues for the events in the new season.

He added that they would open the Leyla Gencer Museum at the Bakırköy opera building.