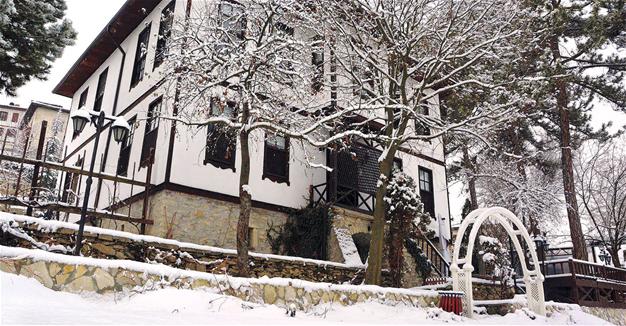 The Black Sea province of Karabük’s Safranbolu district, which is famous for its well-preserved historical structures such as Ottoman-era wood houses, mosques, inns, baths, fountains, tombs and guilds, entered the UNESCO World Heritage List in 1994. Since then, the district has welcomed 3 million tourists in 22 years.

Safranbolu’s identity changed after it gained world heritage status, as the historical mansions in the district became prominent once more with developments in tourism, the restoration of disorganized cobblestone streets and monumental structures and the revival of nearly forgotten handicrafts.

Thanks to its success in protecting the riches of the 18th, 19th and 20th centuries, Safranbolu became one of the world’s best preserved cities and increased its importance for UNESCO.

The district, which is home to renowned structures such as the Cinci Hanı Bath; Köprülü Mehmet Paşa, İzzet Mehmet Paşa, Dağdelen, Hidayetullah and Kaçak (Lütfiye) mosques; İncekaya Aqueduct; Old Government Mansion and Clock Tower; historical fountains and bazaars, celebrates the anniversary of its inclusion on the UNESCO list every year on Dec. 17.

Safranbolu Mayor Necdet Aksoy said the district was inscribed as a rural protected site in 1976 before opening its doors to the world after it entered the UNESCO list.

“Twenty-two years ago on Dec. 17, Safranbolu was given world heritage status. As a result of our struggle against modernization that started in the 1950s, today we have a world heritage. The district has progressed. Nearly 1,500 artifacts and historical structures under protection have been restored and revived,” he said.

Aksoy said acquisition of UNESCO World Heritage Status had changed the fate of Safranbolu. “Safranbolu failed to get its share from tourism at the beginning of the 1990s, but it started taking steps thanks to UNESCO. It hosted 20,000 local and foreign tourists in 1995; now we host 300,000 tourists. These figures increased to 750,000 in a year with daily tourists.”

During a program on Dec 17 at Karabük University to celebrate the 22nd year of the district’s inclusion on the UNESCO list, Culture and Tourism Ministry General Directorate of Cultural Heritage and Museums Department of Museums President Mustafa Yaşar Güneş said Safranbolu was a district that could protect itself.

“We use all of our resources for Safranbolu. In this sense, we have regulations to contribute to the restoration of immovable cultural properties. In five years, we spent 2 million Turkish Liras on 51 registered structures and provided nearly 1 million liras on projects.”

Speaking about archaeological works in Safranbolu, Güneş said works had been continuing in the ancient city of Hadrianopolis since 2013 but they did not have an archaeological museum.

“I have been struggling for it for three years. There is the City History Museum which is affiliated to my department. With the ministry, we made a plan for the establishment of an archaeology and ethnography museum. I believe that it will contribute to the development of tourism activities in the district,” he said.