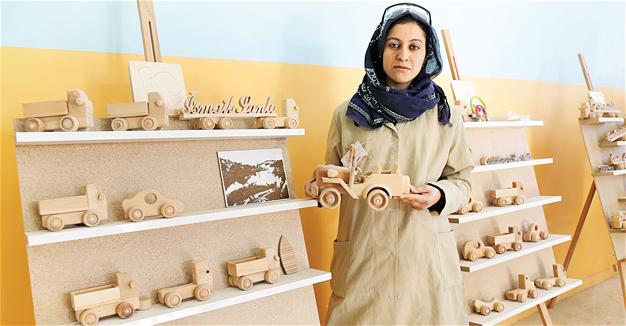 Products inspired by Amazon queens in the southeastern province of Şanlıurfa’s Harran district are helping Turkish and Syrian women in the area provide themselves with an income.

In the Harran Municipality’s family support center, disadvantaged women between the ages of 16 and 45 have been taking courses on felt, wood, toys, carpets and ceramics for 10 months.

Around 90 women are now producing nearly 300 types of toys in the classes.

Giving new forms to felt, the women are inspired by historic mosaics unearthed in excavations at the local site of Haleplibahçe to produce mosaic felts.

In the ceramic courses, the women process various designs on mud and cook them in ovens.

The products, which have been put on the market in various provinces, particularly in Istanbul, have drawn great interest to become a brand under the initiative of Harran District Gov. Temel Ayca.

Ayca said they launched the endeavor because Harran had a high tourism potential but no souvenirs to offer tourists.

Thinking about the women living in the region, Ayca said they conducted some positive discrimination to open the family support center.

“In the meantime, we started giving courses to women on souvenirs. In contrast to other support centers in Turkey, Harran and Syrian women are trained together in our center. We also help Syrians integrate into the region,” Ayca said.

He said the trainees were pleased to be working together, adding that the raw materials for the products were imported from other districts and processed by the women.

“Within a short time, our courses progressed. Then we needed to sell the products and provide income for trainees. This is why we decided to start sales under a brand name. We received support from professionals to find a name for the brand; we decided to use the name ‘Amazon Queens,’ which was inspired by the Haleplibahçe mosaics. We also wanted to focus on women’s production. After the registration is completed, our products were put on sale,” the district governor said.

Ayca said women had begun earning income as the products were put on the market, adding that he believed the income would increase every other day.

Stating that the women were happy to be working, he said: “We changed women’s view on the courses through time. They became happy when they began earning money. People need to see this place so we hope that the number of trainees will increase. Our goal is to open new courses in villages next year. We plan to send the trainees who receive certificates to these villages as trainers.”

One of the trainees, Hela Ibrahim of Syria, said she was living in a container city in the district and attending the courses to obtain a profession. “I have been in this course for eight months and am very happy,” she said.

Another trainee, Hatice Alma, said they produced wooden toys with their Syrian friends. “We are working on various machines. We are very pleased that our products have become a brand. We don’t see the course as a place of business but a place that motivates us. Our aim is to produce more products.”