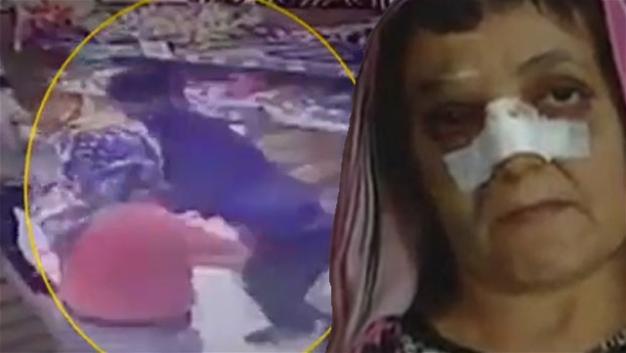 A Turkish woman was physically attacked after she was verbally assaulted for allegedly “not walking properly” at a supermarket in Istanbul, private broadcaster Show TV has reported.

Aslıhan Çamoğlu, 53, told the station that the attacker told her to walk properly at the supermarket, saying otherwise he would beat her. After she confronted him he broke her nose by hitting her with a heavy object.

“You go to the market and face a beating for no reason. I did not know the man and he does not know me. This is the first time I’ve ever experienced such a thing,” Çamoğlu said.

Video footage showed the man attacking her while fellow shoppers in the supermarket stand aside without intervening.

Çamoğlu said the attacker claimed that Çamoğlu “deserved it” after the assault, while fellow shoppers told them to fight outside.

Çamoğlu filed a complaint with police against the attacker, but he was reportedly released after giving his testimony.

Shopkeepers in the area said the attacker had often stood in front of the market demanding money from shoppers, attacking them if they refused.

The incident comes after outrage was stirred last month by footage of a 23-year-old woman being kicked in the face on a public bus for wearing shorts in Istanbul.

The attacker, Abdullah Çakıroğlu, was arrested by police on Sept. 19 after he was re-detained following his initial release, which had sparked a massive reaction from the public.