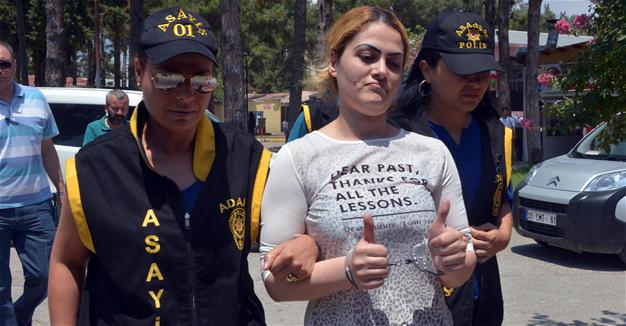 Two images, one from American musicals and another from Turkish newspapers, appear before my eyes when we talk about women who kill in self-defense. The first one is the often-parodied “Cell Block Tango” – from the musical “Chicago,” in which six women “murderesses” explain why they killed their men. The refrain is a catchy one: “They had it comin’ all along/ they used us/ and they abused us/ How could you tell us that we were wrong?” and ends with “It was a murder but not a crime.”

The second image is that of Çilem Doğan and her T-shirt that reads: “Dear past, thanks for all the lessons. Dear future, I am ready” giving a thumps-up sign as she stood trial for killing her abusive husband. Doğan had been the victim of repeat abuse at the hands of her husband. Finally, when he tried to force her into prostitution, Doğan got a gun and killed him. Earlier this year, she was released on bail following her lawyer’s appeal until the Supreme Court of Appeals’ examination of the sentence. The international media called Doğan “the murderess who became a social media icon,” to express the huge emotion behind this angry young woman with the round face and a beauty spot.

The case of Doğan was far from being an isolated case: In September, daily Hürriyet reported that a woman identified as Kader K. killed her estranged husband with his own gun as he tried to kill her for walking out on him. The same week, daily Cumhuriyet reported that a woman in Istanbul identified as E.O. bit off the tongue of a man who harassed her on the street, squeezed her against a wall and tried to force his tongue into her mouth in a kiss.

Are Turkey’s women, unprotected from violence by the existing laws, refusing to be victims and defend themselves against male violence?

According to Gülsüm Kav, the director of the “We Will Stop Femicides Platform,” women who resort to violence to defend themselves is not something new. “Years ago, when I went to the women’s prison, I met many women who had killed their husbands in self-defense, so this is hardly new,” she said in an interview with the Hürriyet Daily News. “However, it is fair to say that the number of such cases has increased, as well as their visibility.”

Kav attributes this increase to two factors. First, violence against women has increased both in number and brutality. “Women are subjected to unprecedented violence in our days. Violence is frequent, widespread and often inhuman in dimension,” she said.

Numbers and reports on the cases back this observation. According to an interactive Femicide Map of Turkey, which was made possible by the Platform for Independent Journalism, there were 1,134 femicide victims between 2010 and 2015. The majority of the victims were killed by husbands/ex-husbands (608 cases) and boyfriends/ex-boyfriends (161).

The second reason is that violence is no longer hidden and covered. Compared to 20 years ago, there are more women’s organizations, lawyers who are specialized in helping women to take their cases to court and media willing to name-and-shame the aggressor. “The women’s movement in Turkey succeeded in creating awareness that violence is a social problem, not simply judicial cases or family matters,” Kav added.

Both Kav’s platform and other groups maintain that women are acutely aware that the present law – the so-called Article 6284 which enables a woman to ask for police protection if she is threatened – is not working.

As a result, there are women who carry a knife or a spray on them, or take karate courses, said Kav.

But Kav expressed doubt that women who are forced to defend themselves would cause men to think twice before resorting to violence. “I call this the Beatrix syndrome in Kill Bill,” she said, referring to the fictional character also known as “The Bride” played by Uma Thurman, who tried to take revenge on her one-time-lover-then-attempted killer Bill by killing him and everyone on his team. “This may be a fictional image but it is far from the reality. In a society where there is supremacy of law and legal protection, women – or men – do not need to take the law onto their hands. The real fight to stop femicides should be through political will for zero-tolerance toward violence against women, a good legal framework, collective attempts and creating a security net for women.”

Lawyers and activists claim that women who have used their legitimate right of self-defense have difficulty benefitting from reduced sentences or pardons, although it is often documented that the very same women applied for police protection. “The law is more tolerant to men who shoot women than women who defend themselves. This is precisely what we are trying to change,” said Kav.

Doğan was sentenced to an aggravated life sentence on charges of involuntary manslaughter, but the sentence was later reduced to 18 years for unjust provocation and then 15 years for her good conduct during the trial. It remains to be seen whether this will set a precedent in similar cases.