By Pinar Tremblay for Al-Monitor 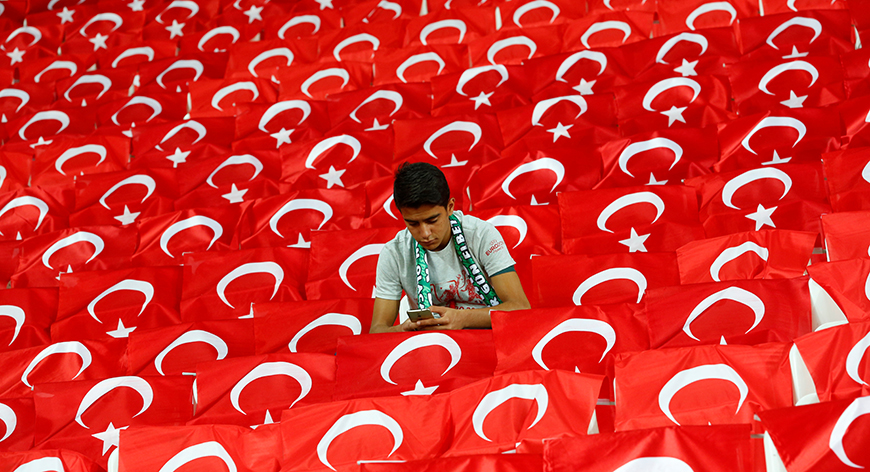 If you think Turkish domestic politics are complicated, challenge yourself to detangle the politics of soccer in Turkey. Turkish interest in its national pastime of soccer is in sharp decline. Stadiums used to be filled with at least 30,000 fans for a game. Now most games can barely bring in crowds up to 4,000. During national games, most fans would rather chat about the team’s technical director onsocial media than watch the game.

Although there were years of financial troubles, violence and vandalism during and after games, match-fixing troubles and Passolig — a mandatory, e-ticketing system that allows the government to monitor fans — the national team always generated interest, even from those who do not follow soccer. So why are Turkish fans now turning their back on their team?

Fatih Terim is the coach of the national soccer team. He has been a prominent figure in Turkish soccer since the early 1990s and is known by the nickname “Emperor.” Soccer commentators agree that his ego has become an obstacle to the team’s success in the last three years. Ismail Sarp Aykurt, the sports editor of Sol daily and a basketball coach, published a piece about Terim in June, writing, “With a monthly salary of 2,900 workers combined, Terim has become the boss of Turkish soccer.” Aykurt said that Terim’s ego is a bottomless pit. “He is able to threaten anyone who dares to criticize him or have any journalist who provides negative commentary about him fired.”

The contract Terim signed in 2013 with the Turkish Soccer Federation was leaked to the press Oct. 4. According to its conditions, if Terim is fired, the federation would have to compensate him 7.6 million euros ($8.3 million). Currently, Terim’s annual income is 3.5 million euros ($3.8 million). These numbers make Terim one of the highest paid coaches in the world.

“In a country where millions are suffering below the poverty line, Terim’s salary shows us one more time that the domestic order is out of sync. His pay is just one more indicator of the growing gap between rich and poor in the country,” Aykurt told Al-Monitor.

The public’s frustration can be seen on all social media platforms. For example, one trending tweet said, “Fatih Terimson could order doner and a yogurt drink for the entire population of Iceland, but we are still losing 2-0 to them. How come?”

“Terim’s ego and authoritarian style turns the audiences off, especially if the team is not winning. Turkey performed below expectations in Euro 2016, and several rumors about internal fighting on the team were leaked to the press. It was about the bonus payments to the players,” Ali Murat Hamarat, BirGun daily’s sports writer, told Al-Monitor. “When the press got ahold of a leak that some of the star players were not paid, while some others who did not get any play time were paid, and when the numbers were announced, there was a public shaming of the players."

Whenever the team loses, Terim is known to find a way to assign blame to others, including the media and political pressures. This time, the bickering about bonus payments became his justification for losing more games at the Euro 2016 and also the disappointment of the first two games of the World Cup 2018 qualifiers against Ukraine (Oct. 6, a draw at a home game) and Iceland (Oct. 10, Turkey lost 2-0). While the Turkish public was asking the players to donate these extravagant sums of bonus payments to the Turkish Armed Forces and martyrs, players were complaining to the federation that the amounts that were promised to them had not materialized. In the meantime, there was an open rift between the best players, including the captain of the national team and Terim. As summer came to an end, Terim announced that he would not ask the star players who were playing in big name clubs abroad to join the team for the World Cup 2018 qualifiers. Terim’s exclusion of the star players further alienated fans in Turkey, who were convinced the decision was not on merit but due to Terim’s ostentatiously large ego.

Hence, this leads up to the second reason: financial corruption. Extravagant payments, shady transactions, match-fixing allegations and several warning signs raised from international soccer agencies, such as UEFA, all turned off fans. For example, Galatasaray, one of the most prominent teams in the Super League, received a season ban from entering UEFA competitions for violating financial fair play rules.

Kenan Basaran, Hurriyet daily’s sports columnist, told Al-Monitor, “The e-ticketing system unique to Turkish stadiums have gradually alienated two main groups from the sport — rural and lower middle classes who find the e-ticketing impractical and difficult, and the urban fans who are protesting the surveillance purpose of the system." He added that, "If there is any rowdy behavior at the game, all fans are punished the next game, and this turns people off.” Amid decreasing ticket sales and match-fixing rumors, major sponsors, such as Yildiz Holding, have pulled their support from the prominent teams, further increasing the debt of the individual teams.

The last reason — politics in soccer — is backfiring in Turkey and alienating more people from cheering for their national team. Turkish President Recep Tayyip Erdogan, who was a soccer player in his youth and is known for his passion for the game, has managed to use soccer to connect with the masses. However, soccer stadiums can also be places where sudden outbursts of public disapproval could happen, such as the booing of political leaders. In addition, Carsi Group, a major fan group of prominent soccer team Besiktas, has been a vocal supporter of the Gezi movement and is known for its critical opposition to Erdogan. Along with financial gains through the unique e-ticket system, it was suspected that Erdogan wanted to deepen surveillance on any grass-roots opposition against him at the stadiums.

“The complex relationship between soccer and politics is so intricate that it is almost impossible to survive in sports without some sort of alliance with the government. For example, look at the taxes charged and paid by the teams. Every other year the teams are waiting for the government to forgive their tax debts. Check out the teams that were promoted to the Super League in the last years, teams that were unheard of before — Osmanlispor (Ottoman Sports Team), Kasimpasa Spor (Kasimpasa is Erdogan’s childhood neighborhood in Istanbul) and Kayserispor (the city where former Turkish President is from). That said, Izmir, for example, which is the third-largest city, has no proper stadium or well-financed team of its own,” Hamarat told Al-Monitor.

Indeed, soccer is all about politics in Turkey. Just ask anyone why the last game of the national team was played in Konya province rather than the capital city or Istanbul. The answers are likely to be quite varied, depending on the political affiliation of the person speaking. People who struggle under Erdogan’s rule are also having a difficult time rooting for their national team. Turkey is so polarized that even national soccer team matches cannot make people forget their differences for a few hours; people instead openly declare, “The best player of Iceland was Terimson .”