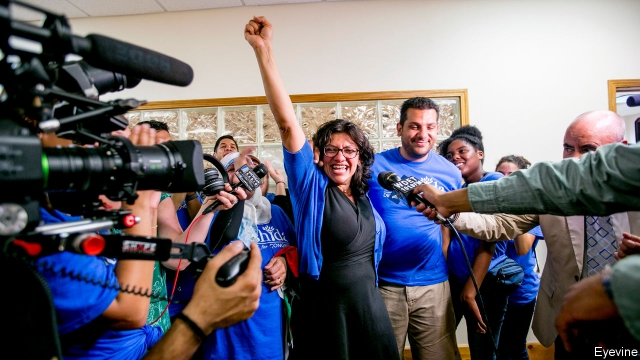 IN HIS first presidential campaign, George W. Bush received 42% of the Muslim-American vote, compared with 31% for Al Gore. The 9/11 attacks, and the wars that followed, changed that affiliation. Eight years later, Muslim-Americans overwhelmingly backed Barack Obama. This was a big change for a religious minority that tended to have conservative views: traditionalist Muslims and LBGT advocates are strange bedfellows. Donald Trump’s election, though, has brought a clutch of progressive Muslims into politics. Some are now heading to Congress.

America has 3.5m Muslims, around 1% of the population. Some say the number is closer to 5m and rising; the Census Bureau has not asked questions about religion since the 1950s, so it is hard to know for sure. Only about 100 Muslims filed papers this year to run for office. These few attract a disproportionate amount of attention, largely because of America’s views of their faith. Polling by the Pew Research Centre in April 2017 found that 44% of eligible voters think there is a “natural conflict” between Islam and democracy.