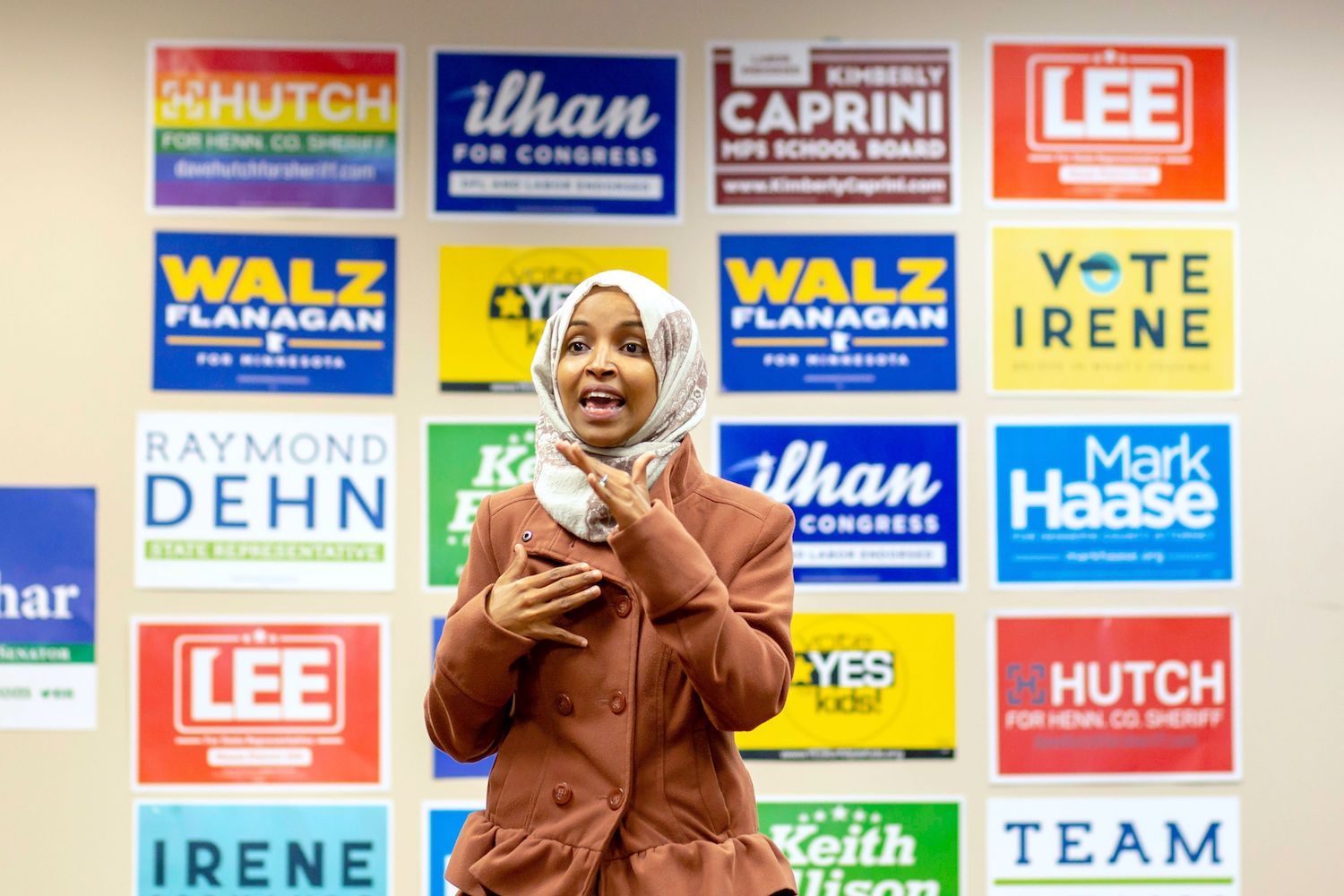 The first time a veil was worn on the floor of the U.S. House of Representatives, the wearer was not, as one would expect, a Muslim woman. Instead, it was a woman named Carolyn Maloney, a Democratic representative from New York. In October 2001, as the ruins of the Twin Towers were still smoldering, Maloney put on a blue burqa, the kind worn by women in Afghanistan, as part of a theatrical appeal to get representatives to vote for a war against the Taliban. “The veil is so thick, it is difficult to breathe,” Maloney declared as part of her plea for war against the Taliban whom she—incorrectly—blamed for the 9/11 attacks.

In January 2019, Ilhan Omar, the congresswoman-elect from Minnesota’s 5th District—who wears a headscarf—will become the first veiled woman to serve in Congress. Much has changed in the past 17 years. The myth of saving Afghan women by bombing their country into oblivion has shown itself to be a devastating proposition. The Taliban are still around, and there is talk of making peace with them as the United States wearies of trying and failing to produce some sort of victory. Maloney is also around, winning her 14th term in last week’s midterm elections, even as Omar won her first. Nor will Omar be the lone Muslim: Joining her will be Rashida Tlaib, a longtime activist of Palestinian descent, who was elected in Michigan’s 13th District.

Maloney, Omar, and Tlaib represent divergent views of feminism. Maloney’s brand is American feminist exceptionalism, in which American women—intrepid and veil-free—are beacons of freedom with a duty to evangelize their particular brand of empowerment, even if it means using bombs.

If Maloney’s is the feminism from above, bestowed on black and brown women by white ones, the progressivism of Omar and Tlaib represents feminism from below. For both, their experience as community organizers reflects a faith in grassroots work. Theirs is a feminism of choice rather than one erected on glib pronunciations on who is or isn’t free or paternalistic exhortations of what poor immigrants or struggling blue-collar women must do to join the ranks of the elite white feminists who normally dictate U.S. feminist discourse. And because their backgrounds—Somali and Palestinian—have been shaped by long histories of failed foreign interventions, Omar and Tlaib are unlikely to ever to see the liberation of women, Afghan or otherwise, as an argument for war. Yet all three are Democrats—a fact that raises the question of which brand of feminism will ultimately define the future of the Democratic Party.

In the wider world, the elections of Omar and Tlaib have led to much gushing and rejoicing. Compared to President Donald Trump’s rage-fueled rallies, the stories of Omar, who lived in a refugee camp and knew no English when she arrived on U.S. shores at 12, and Tlaib, who grew up partly on welfare as one of 14 siblings, provided some solace. Even if the United States has a president whose cultish following relishes his denunciations of all Muslims as terrorists—in a speech hours before the 2016 presidential election, Trump insisted that Somali refugees were a disaster for Minnesota and that many were joining the Islamic State—here, it seemed, was evidence that the country was not so bad after all. If women like Omar and Tlaib can succeed, then perhaps the United States could be saved.

Beyond the haze of victory lie tremendous challenges. A Pew survey found that attacks against Muslims in 2016 surpassed the previous high in 2001. Half of U.S. Muslims said they felt that it has become more difficult to be Muslim in America than it used to be; three out of four said there was a lot of discrimination against Muslims in the United States, a view that was reiterated by nearly 70 percent of the general public. It wasn’t just discrimination: Many American Muslims reported that they had faced intimidation and threats of bodily harm and seen mosques and other properties vandalized.

The election of two Muslim women won’t necessarily make things better for them. One of the most recent attacks against a veiled Muslim woman took place in Dearborn, Michigan, which is Tlaib’s constituency. The incident, caught on a closed-circuit camera, shows a woman in a headscarf and a long black robe approach the desk at a hospital’s emergency room. Within five seconds, a man approaches from behind her and repeatedly strikes her head with his fist.

The attack is just one of many perpetrated by white men, which add to the general fear that pervades the very Muslim-American communities that the two women will represent. It will be difficult to highlight such crimes and protect these communities within a political milieu where Islamophobia has become a fixture in public discourse.

Defending Muslim-Americans from a perch on Capitol Hill will be a challenge—but reforming the community from the inside, particularly where the rights of Muslim women are concerned, will be just as hard. Communities that feel besieged tend to turn inward, so much so that they become uninterested in internal reform.

Since 2005, when the Muslim scholar Amina Wadud led a mixed-gender congregation in prayer, an act that initiated a campaign for equal rights within worship and mosque spaces, Muslim feminists have worked hard to push for greater rights. Twitter hashtags and online discussion forums have emerged to advocate for women to be admitted in the central worship spaces of mosques instead of being relegated to side entrances. Young Muslim feminists are eager to use the victories of Tlaib and Omar to push equality within the faith. But progress may be slow, and managing their expectations will likely be difficult.