Is it allowable to kill Bashar al-Assad? "It is," says university professor David Crane, "under certain circumstances." He asks the question to one of his students during a lecture, then answers it immediately himself, without any discernable emotion. Crane was once a chief prosecutor for the United Nations, but these days, he is a professor at Syracuse University's College of Law in the state of New York. As a lawyer, when he sees Assad, he doesn't see a monster, he sees a case. And it's a case that he wants to bring before a court.

Syracuse is a city of 145,000 inhabitants in the so-called Rust Belt, an industrial region approximately four hours by car from New York City. The University of Syracuse has a good reputation, especially when it comes to law.

It is here where Crane, shortly after the beginning of the Syrian civil war, established a kind of student public prosecutor's office. Together with their professors, students are preparing for the day when Assad's war crimes will hopefully be tried before an international court. They call it the Syrian Accountability Project.

Crane's appearance is unremarkable, with a light-colored shirt, gray wool trousers and dark glasses. But he comes alive when he talks about what drives him: the opportunity to use legal powers to confront unimaginable horrors.

At such times, the friendly professor turns into a fierce lawyer, unafraid of travelling to the world's more uncomfortable places. It was Crane who, in 2003, indicted one of Africa's most powerful dictators, Charles Taylor, in Freetown, Sierra Leone. In 2012, Taylor was sentenced to 50 years in jail. Liberia's former president is being held responsible for the death of over 100,000 people and is currently being kept in an English prison, which he will likely never leave.

Crane and his students hope that either the United Nations or post-war Syria decide one day to establish a special tribunal to prosecute the conflict's war criminals. Indeed, they are collecting evidence as if such a court already existed, comparing sources from around the world, checking eyewitness reports and communicating with human rights organizations. They comb through government reports and media articles as completely and thoroughly as possible. They are keeping precise records of this war, documenting every day, thus creating the world's most complete matrix of war crimes in Syria. It is an index of horrors, up-to-date versions of which Crane regularly sends to the UN and the International Criminal Court.

The young people staying up all night to do this are doctoral candidates, like Molly White, 24, from Michigan. Even as a child, she was fascinated by serial killers and the fragility of civilization. With the Syrian Accountability Project, she is motivated by the idea of working on something that "will change the world," instead of ending up in the trash can. 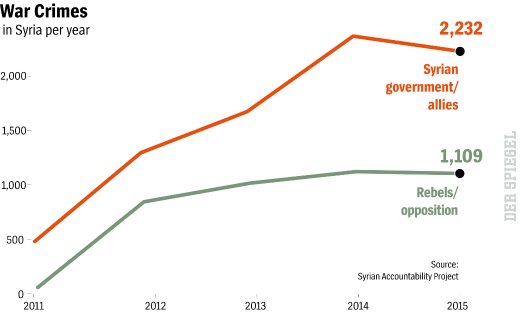 DER SPIEGEL
The database now consists of 17,000 pages of documentation. It is meant to scare the perpetrators, especially the members of the regime responsible for the ghastliest of horrors. By December 2015, the lawyers had registered 12,252 incidents, almost two thirds of which were clearly carried out by Assad's troops. But the commander of Islamic State (IS), members of the Free Syrian Army (FSA) and other perpetrators are also listed. One of every five misdeeds perpetrated by the those fighting Assad, however, cannot be clearly attributed because neither the rebels nor the IS wear uniforms or insignia, but they are carried out by opposition groups.

"What's certain is that no party to the war is innocent," says Peter Levrant, the 29-year-old head of the project. When it comes to international law, it isn't so much the number of losses, the size of the damage or the death toll that matter -- it's about the fact that a war crime took place.

Levrant is currently holding the first versions of the indictments in his hands. The one for Bashar al-Assad is 20 pages long and includes "crimes against humanity" and "war crimes."

In the documents, the students meticulously detail how on March 15, 2011, the commander of Assad's Republican Guard in Damascus, Suheil Salman Hassan, gave the order to fire on unarmed demonstrators and how the commander in chief, President Assad, has been leading systematic attacks against civilian populations -- broken down by day, village, city and administrative district.

The authors dedicate a chapter to the at least 130,000 missing people, and the torture methods used by Assad's secret service. They range from the breaking of bones to burning people alive. The students are using the indictment against former Liberian President Taylor as a blueprint for the charges against Assad.

Crane's office on the third floor of the university is small, with oak-patterned shelves, a simple table and no plants. There are no symbols of his fame or professional achievements. In Syracuse, though, everyone knows him -- the staff in the café, the hotel driver. And in the small, international world of people who hunt for war criminals, his reputation is well known.

The position of chief prosecutor for the UN'S Special Court for Sierra Leone is among the highest of honors for a lawyer. When Taylor was convicted for crimes against humanity in the so-called "blood diamond" trials, it was a good day for Crane.

Prior to his assignment in West Africa, Crane worked for the US Defense Department for 30 years as a legal advisor. His last position at the Pentagon was a delicate one, as director of the Office of Intelligence Policy and Review, which advises US intelligence services on legal matters. His 2014 presentations before the Security Council and the European Commission about the "Caesar" case are legendary. 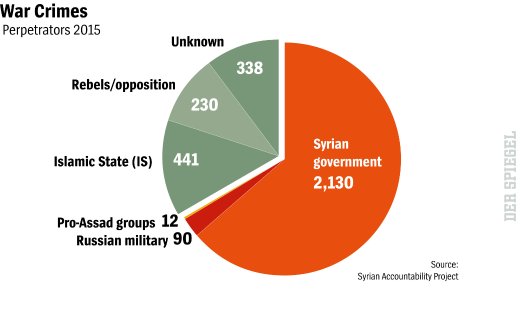 DER SPIEGEL
Caesar is the pseudonym used for a military photographer from Syria. For months, he smuggled evidence -- photos of prisoners who had been starved to death and who exhibited evidence of torture -- out of his department on USB sticks, which he stored in his shoe. The cache includes 55,000 photos of 11,000 bodies, proving how people were "killed in an industrial manner" in Assad's torture dungeons. If the regime had caught Caesar, he would have been the next one to show up dead in a photograph.

Caesar's material was initially passed by Syrian rebels to the government in Qatar, and British law firm Cater-Ruck hired Crane on behalf of the Qataris. As independent experts, he and two other legal experts were tasked with determining whether the photos were authentic.

"The photos are 100 percent real," says Crane, adding that Caesar is also real. The lawyer says he spent four days talking with the source. Caesar didn't want any money. He couldn't bear photographing over 50 torture victims per day, he said, and when a friend of his turned up among the dead one day, he decided to flee. Today, Caesar lives somewhere in Europe under an assumed identity.

Crane is convinced that Caesar's data only shows a small part of the truth. The photos came from three torture facilities in Damascus, but there are approximately 50 such sites across the country.

In the current political constellation, Crane's plan doesn't have a chance. As allies of Syria, Russia and China have voted several times in the UN Security Council against establishing a war-crimes tribunal for Syria. But in March, the US House of Representatives decided to press the UN to create a special tribunal. Republican Congressman Chris Smith even suggested using Crane's data set as a basis for it.

Thus far, students Levrant and White have finished writing five indictments with their professor. Now they want to write indictments against commanders of IS, the Nusra Front and the Free Syrian Army.

"We don't have a political agenda," says Levrant, the head of the project. "A crime is a crime and the law is the law." Even if it comes to an indictment, it would be impossible to punish all of the people responsible. But it would be possible to target the principals, the top commanders of fighting units that took part in war crimes.

Crane actually lives a rather placid life as a retiree in North Carolina. He walks in the vineyards and takes care of his grandchildren. Once a week he flies to Syracuse for two days. He studied here over 40 years ago, and it brings him happiness to teach the prosecutors of the future how to hunt down war criminals.

As the son of a US officer, he lived for a time in southern Germany. As a 12-year-old in 1962, he visited the Dachau concentration camp with his family. "I could still smell the horror," he said. The experience stuck with him and ultimately motivated him to study law.

At the time, Crane was proud of how the Americans defended freedom in Europe, but today, he often finds it difficult to be proud of his nation. He was about to leave the Defense Department when planning for the Iraq war was underway in 2002. He says it was "only for one reason, oil."

And then there's the Charles Taylor affair. As chief prosecutor, Crane wondered at the time why, despite his excellent relationship with US intelligence services, he wasn't receiving any support -- why, in fact, his investigations were even being hampered. As it turns out, Taylor had been working for the military intelligence agency DIA as well as for the CIA, and they wanted to continue the cooperation.

Crane is most ashamed of the fact that his country hasn't signed onto the Statute of the International Criminal Court and quotes former US President George W. Bush, who once said that if just one US soldier had to answer before the court, he would march into the Netherlands.

Crane thinks it's extraordinary that the biggest war criminals in the world -- the US, China and Russia -- have never been called to account because they take advantage of their veto in the UN Security Council.

Thus far, very few have taken note of the war-crimes matrix being prepared in Syracuse. Crane, however, has experience with the process.

The path to justice, he says, is long and full of setbacks, but it can happen. After all, he's managed it once before