By DIAA HADID for NY Times

HOLON, Israel — They had never met, but they were Facebook friends connected across thousands of miles. Together the two digital acquaintances — a young English teacher in Jalalabad, Afghanistan, and a retired State Department official living in Haifa, Israel — collaborated to save a baby in Pakistan with life-threatening congenital heart problems.

Yehia, now 14 months old, had been born with his two main arteries reversed and two holes in his heart. His parents, Afghans living in Peshawar, Pakistan, found a local specialist who could perform the necessary surgery, but the price tag was $7,000. It might as well have been seven figures to the child’s father, who makes his living selling flour. The family’s savings, $200, had already been depleted by medical bills.

On a trip to Afghanistan for a family wedding in April, they sought out a relative, Farhad Zaheer, a teacher in Jalalabad who speaks English and is active on social media. Could he help? “No problem,” Mr. Zaheer, 29, recalls telling them. “I said, ‘I know lots of people, and I will contact them.’”

Among the people he contacted was Anna Mussman, 69, who has both American and Israeli citizenship. Mr. Zaheer had sent Ms. Mussman a friend request in 2012 after he worked on a project training teachers in Nouristan Province, which Ms. Mussman was overseeing for the State Department. He remembered Ms. Mussman, he said, because she commented kindly on his posts. 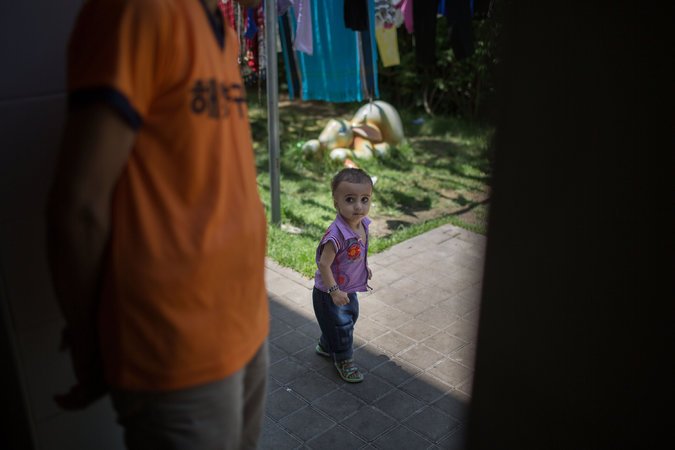 Yehia in the days before his surgery. Credit Uriel Sinai for The New York Times

Social media has flattened communications across the globe, sometimes allowing for remarkable connections like this.

“Hello dear Madam!” Mr. Zaheer wrote in a Facebook message, with a photo of young Yehia attached. “This boy is my cousin who has been suffering from hole in heart. If you can do anything for his good health, we would be very thankful to you.” Ms. Mussman, who was born to Holocaust survivors in a displaced persons camp in Germany, jumped. Within a few hours she had contacted Simon Fisher, the executive director of Save a Child’s Heart, an Israeli charity that she had heard about once on CNN. The group provides free surgeries to children from developing countries.

“I realize helping a child from a country which Israel has no diplomatic relations is not easy, but perhaps possible,” Ms. Mussman wrote to Mr. Fisher in an email. “Thanks so much and Shabbat Shalom.”

It did not get any less complicated from there. Numerous other strangers and acquaintances helped plot a multicountry medical odyssey that barely skirted last month’s failed coup attempt in Turkey and culminated in an eight-hour surgery on July 30 at Wolfson Medical Center here in Holon, a city near Tel Aviv. 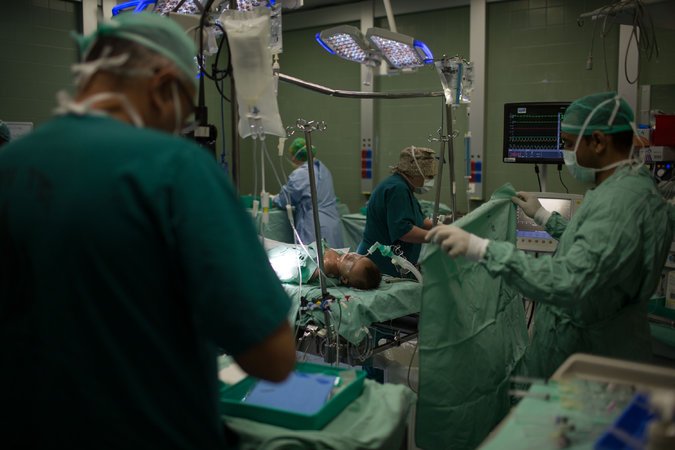 Doctors getting ready to operate on Yehia. Credit Uriel Sinai for The New York Times

Yehia — whose father spoke on the condition that the family name not be published for fear of a backlash if it became known he had taken the boy to Israel for treatment — is the first Afghan treated by Save a Child’s Heart in its 20 years of operations. About half the charity’s 4,000 patients have been Palestinian; 200 others were children from Iraq and Syria, and the roster includes patients from Tanzania, Ethiopia and Moldova.

Israel boosters often highlight such programs as examples of the small nation’s outsized humanitarian efforts, including to hostile neighbors. Leora Robinson, a second-year medical student in Britain who is doing an internship at the charity, said that it provided an important counterpoint to portrayals of Israel as an occupier of Palestinian land, as she saw on campus during Israel Apartheid Week. “It opens eyes to the fact that this country doesn’t just have one side to it,” Ms. Robinson said.

But Tony Laurance, head of a group called Medical Aid for Palestine, said that while providing children “world-class surgery” was “an unequivocal good,” it should not obscure the broader impact of Israeli policies on medical care for Palestinians. Gaza hospitals are perennially short of medicine, equipment and well-trained staff because of Israeli restrictions on travel and trade, and many Gaza residents struggle to get exit permits for care outside the territory.

“What gets up my nose,” Mr. Laurance said, “is that it presents an image of Israel that betrays the reality.” 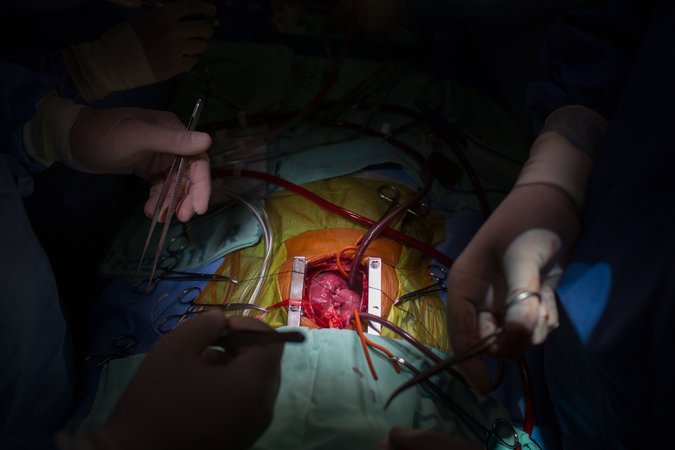 Doctors during the operation to repair Yehia’s heart. Credit Uriel Sinai for The New York Times

Mr. Fisher, executive director of Save a Child’s Heart, said his organization did not represent Israel’s government, “but it does represent Israeli society.” Private Jewish donors provide most of the $3.5 million annual budget, he said, and about 70 health care workers volunteer their time.

It was Mr. Fisher who, drawing on years of contacts, obtained Israeli visas for Yehia and his father after Ms. Mussman contacted him. But they would have to travel through Turkey.

Mr. Zaheer, the Jalalabad teacher, ever-confident, finagled his way into the Turkish Embassy in Kabul, where a sympathetic guard slipped him the email address of a Turkish diplomat. Ms. Mussman, the former State Department official, had put Mr. Zaheer in touch with Fary Moini, an Iranian-American who had worked in Jalalabad and had connections there. Ms. Mussman had met Ms. Moini during a stint in Jalalabad. At Mr. Zaheer’s request, Ms. Moini wrote a moving letter to the diplomat, whom she did not know, pleading for visas for Yehia and his father, and within a day, Mr. Zaheer picked them up.

Ms. Moini volunteered to meet Yehia and his father in Istanbul, accompany them to Tel Aviv, and be an extra pair of hands to care for him. 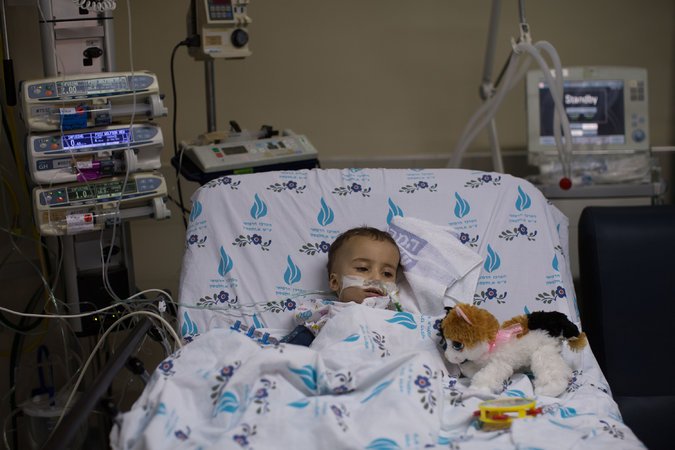 But her July 15 flight was canceled because of the attempted coup in Turkey. Save a Child’s Heart managed to find her a last-minute flight out of Toronto to Istanbul.

Mr. Fisher of Save a Child’s Heart worked to find a translator to help the father, who speaks Urdu and Pashto, communicate with the Hebrew-speaking staff. He remembered that during his time in the Israeli Army he had served with a soldier whose mother came from Kabul’s ancient Jewish community. He called the soldier, Yossi Betsalel — could his mother, Tsipora, translate? No, Mr. Betsalel said, she had long forgotten her native tongue. But she had a relative – Jacob Gul, 56, a retired rug seller, who had left Kabul 32 years ago and was probably still proficient. Mr. Gul immediately agreed to translate, and Ms. Betsalel ended up visiting Yehia in the hospital frequently.

Unaware of those efforts, back in Jalalabad, Mr. Zaheer contacted another Facebook connection he had never met: Michael Davidson, a 70-year-old Israeli who had immigrated from India in 1978 — and who speaks Urdu. Mr. Davidson and Mr. Gul were both on hand in Holon for the surgery, along with Ms. Moini and Ms. Betsalel, who said she had closed her clothing shop early because she could not concentrate while Yehia was having his operation.

Dr. Yahyu Mekonnen, 33, an Ethiopian surgeon, opened Yehia’s chest. Dr. Lior Sasson, who headed an operating team of nearly a dozen people, hummed an Israeli song while they stopped his tiny heart, to patch it up.

Eventually, they wheeled Yehia out, covered in bandages, even over his eyes. His father was surrounded by a makeshift family he had only just met.

“You can cry,” Mr. Davidson urged.

Mr. Gul offered a tissue. Ms. Moini touched his shoulder. Ms. Betsalel showed him photos of his son on her iPhone.

The father broke through his sobs with a polite smile.