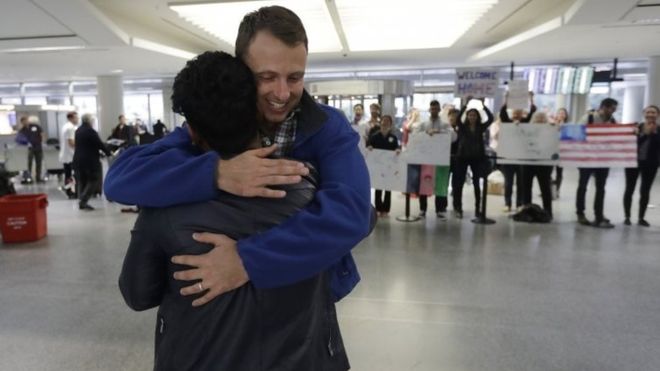 A Trump administration travel ban affects seven mainly Muslim countries, but Afghanistan is not among them.

Capt Ball bought the ticket in case the ban was expanded to Afghanistan.

"Yeah, it feels great. I'm happy to see him. I'm sort of overwhelmed. He's here. It's been a long time."

For now, Mr Amin will live with Capt Ball and his wife, Giselle Rahn, in Palo Alto, California.

Mr Amin reportedly went into hiding after receiving death threats from the Taliban for working with American troops. 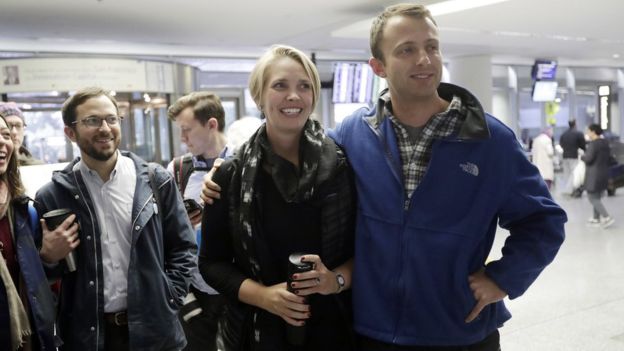 For now, Mr Amin will live with Capt Ball and the American's wife, Giselle Rahn (both pictured)

Capt Ball paid for the $1,000 (£800) ticket after US officials suggested the ban could be extended to other countries.

Mr Amin told AP news agency he was nervous before the trip, but that quickly changed once he stepped off the plane to see Americans holding signs emblazoned with the words: "Welcome to America" and "Welcome Home".

"Actually this has made me much, much stronger, seeing people with the welcome signs.

"I feel like I got a huge family right now, and I got a big family in Afghanistan."

Mr Amin said he wanted to call his mother to let her know he arrived safely, before going to see the ocean for the first time.

Capt Ball, a law student at Stanford University, organised a letter campaign with other students to press Congress on Mr Amin's visa.

The former Army ranger said Mr Amin had protected him during a mission in one of Afghanistan's most dangerous areas.

He said the US government needed to accelerate the often years-long visa process for Afghan interpreters and cultural advisers who live in constant danger.

More than 13,000 Afghans and their immediate family members are still waiting for a special immigrant visa for helping American troops, according to the State Department.