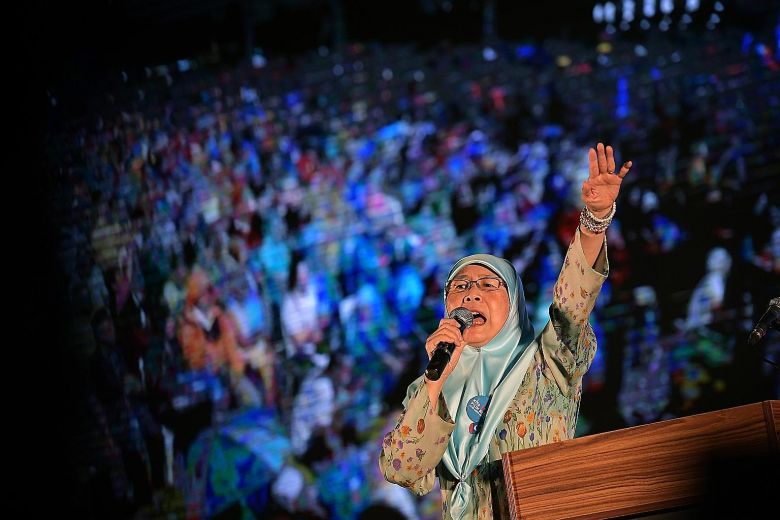 PETALING JAYA • Wearing a floral baju kurung and a gentle smile as she inched her way through a crowded mall in Petaling Jaya, Datuk Seri Wan Azizah Wan Ismail could be mistaken for just another woman trying to do her shopping last Tuesday.

But the president of Parti Keadilan Rakyat (PKR) was out to woo voters, not buy bread.

"What is the price of gold now? It has been awhile since I bought any jewellery," she joked, as she took photos with excited shoppers, flapping her signature folding fan in her right hand - gloved so she can shake hands with men in the conservative Muslim country.

Her easy manner belied the great weight on her shoulders - to lead the charge for opposition coalition Pakatan Harapan (PH) in the general election today, alongside the man responsible for sending her husband to prison two decades ago, former prime minister Mahathir Mohamad.

Dr Wan Azizah, 65, was first thrust into politics in April 1999, when Parti Keadilan Nasional (later renamed PKR) was formed to protest against the sacking of her husband Anwar Ibrahim, who was then deputy prime minister.

"It is not easy (to accept Tun Dr Mahathir)... but I believe he is a changed man, and we are able to work together to save Malaysia," she told The Straits Times.

Meanwhile the 92-year-old former premier will take over her mantle as Anwar's place-holder. Dr Mahathir has agreed to hand over the position to Anwar after the latter is released from prison on June 8 and receives a royal pardon that will allow him to contest in, and win, a parliamentary seat.

Although Dr Wan Azizah has served as party president and elected representative for over a decade, this is the first time she is leading an election campaign since 2004. Anwar was freed after the 2004 polls and led the opposition for the 2008 and 2013 elections, but is now in prison on a second sodomy charge.

Dr Mahathir's 22-year rule may give him the star appeal that draws the rally crowds, but Dr Wan Azizah - fondly known as Kak Wan - is the face of Malaysia's 20-year-old "Reformasi" movement that sought social reform and justice in the wake of Anwar's sacking.