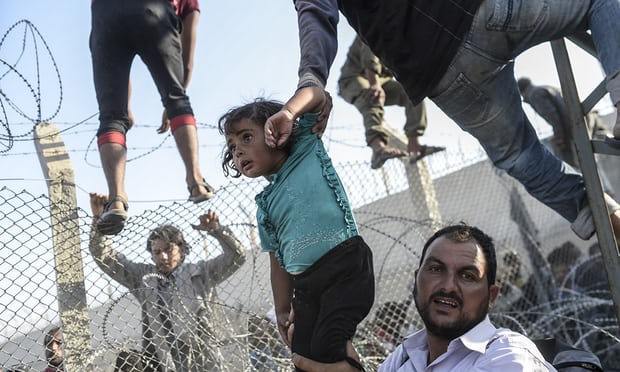 Every night, at the moment, we see pictures of people who have risked their lives escaping terrible dangers. Day after day, reporters interview refugees marching through Hungary or arriving in Germany with nothing except what they can carry.

It might seem frivolous to be talking about stories at a time like this. Shouldn’t we be concentrating on the real world? Isn’t fiction soft and sentimental compared with the terrible news we keep hearing about drowning and suffocation?

No, it’s not. Only bad fiction is soft and sentimental. Good stories help us make sense of the world. They invite us to discover what it’s like being someone completely different. They are explorations - for the writer as well as the reader.

Five or six years ago – before the current crisis began – I spent a lot of time reading about Sudanese refugees in Chad. I had no intention of writing a book about them. I just kept thinking, “Suppose it was me? Would I cope as well as they do?” But I couldn’t really imagine their lives in Chad.

Then one day, instead of thinking, “Suppose it was me?” I thought, “Suppose it was a boy called Matt? An English boy. How would he cope?” And that was the beginning of After Tomorrow, a novel about two English brothers who become refugees in France.

I had to invent a reason for them to become refugees and I decided to make the pound collapse so no one could buy food. Apart from that, everything in the story is as real as I could make it. All the terrible things that happens to Matt and his brother Taco have happened to real refugees, somewhere in the world. People don’t leave their homes for no reason and I didn’t want to trivialise that.

Because the story is set in places I know, I could imagine exactly how Matt and his family felt about leaving home. That’s what real refugees do, after all. They have to leave places they know. That’s part of what we need to understand about the current crisis.

But there’s another side to their experience. Many of the refugees and migrants arriving in Europe at the moment come from countries where the language and culture are very different. It’s important to realise how strange Europe appears to them and how hard it can be to live in a place where everything is unfamiliar and difficult to understand.

Fiction can explore that too. Shaun Tan’s graphic novel The Arrival, for example, does it brilliantly, telling the story of a man who goes to work in a distant country where everything is alien and difficult. It’s set in a fantasy city, unlike anywhere on earth, and – without using a single word - it explores what it’s like to be a stranger in a strange land.